It feels like forever since I’ve picked up the cookbook and actually did a recipe! Hopefully, it’ll happen more frequently in the near future. The plans are always there but somehow the time just isn’t.

This past weekend, I decided to try out a recipe from the latest issue of Food Network for October 2017. They have a Fried Maple-Bourbon Wings and frying is so annoying, including the clean-up work afterwards that I decided to use their recipe but modify a little to bake in the oven.

Here’s the recipe and how it turned out. 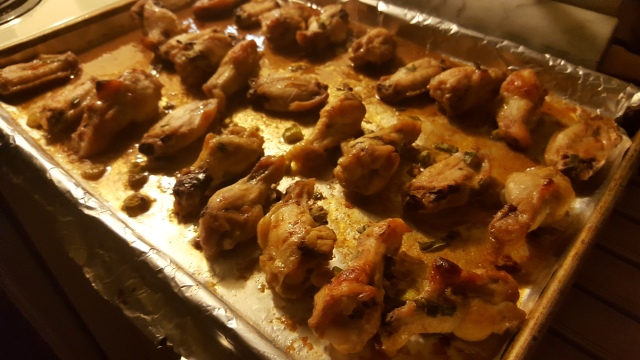 With that said, that was still a diversion of the actual recipe. If you want to challenge yourself to the fried one. just drop me an email and I can send it to you. Or leave a comment or whatnot. Regardless, I did keep a part of the original recipe there in terms of ingredients although removing a few things you need to fry it, like flour and such. My substitutes here really came down to using green onions instead of shallots. Normally, we don’t have shallots here unless it comes with a box and in that case, we have already used it. Green onions are not only in our backyard but also frequently not always used up to the max in the meal boxes so we have left over whenever its for garnish or whatnot.

This recipe is pretty good overall. The maple and bourbon mixture is just right. However, you should use shallots and not green onion. We assume that gave it an odd taste that took time to get used to. Ours could benefit with marinating more than 15 minutes or whatever. I usually would take the time to do it or just simmer it in the pan to let the flavors seep into the meat. It was a last minute decision to put this together.

Now to think about what to do with our second batch of chicken wings? Any suggestions?