After taking a week off from reading, I went back with a paranormal romance novel by Denise K. Rago.  A huge thanks to Denise for reaching out to me to check out this novel.  I don’t think I’ve ever read a paranormal romance that isn’t for young adults.  This one is for adults and I have no idea what to expect but I’m pretty excited.  Its probably why I chose to take a little break to refresh my mind a little before checking this out.

As a young man in 18th century France, Christian Du Maure impulsively follows his best friend into the complex and warring world of the Parisian vampires. Against the backdrop of the French Revolution and following an affair with a mortal aristocrat, he promises to watch over her daughter-only to learn the child is his.  Now settled in Manhattan, only two descendents of his union remain, Amanda and her brother Ryan. After Amanda witnesses a savage murder in Central Park she is determined to find the ethereal stranger who saved her life.  When their worlds inevitably collide Christian finds he cannot prevent Amanda from becoming a pawn in a centuries-old struggle for power. As a confrontation between ancient enemies comes to a head, Christian must face a betrayal from his past that haunts him and threatens the woman he loves. – Goodreads

Immortal Obsession renews this elegance and class of what vampires are. They are from the pass they have a certain set of rules that governs them.  These vampires are respectful, at the very least our main character, Christian Du Mauré is.  His best friend Michel is also respectful in other qualities and at the end, we start seeing hints of a character that will be developed further.  This story has love, family, secrets, vengeance, betrayal, plots and they all form together in a very successful way to push the story along at just the right pace.

What I truly found mesmerizing for Immortal Obsession is the sophisticated language that the author chooses to write this.  The vampires are from the 18th century France and they should reflect that influence and they do.  Reading this story was something so rare in current vampire novels although most of them are in the paranormal.  I love myself some easy reading but there’s something really captivating about a passionate love story made up of beautiful words strung together and that’s how I felt when I read Immortal Obsession. Its a rare feeling I get.

Talking about passion, although its really just setting the stage for probably more deeper romance and there’s this undeniable attraction that takes the front seat between Christian and Amanda, the connection they have is all left to the imagination.  That’s pretty nice.  There is no fleshed out love scenes but rather really passionate moments between the two characters and then it stops it right there. That keeps it satisfying and fun in its own way.  I liked that a lot.  It also keeps the book at a certain sophisticated level that matches the whole feeling and characters this story is based around.

Immortal Obsession is a gem among the paranormal/vampire romance novels I’ve read.  Its sophisticated language weaves a beautiful story filled with deep and intriguing characters while understanding the back story of our main character, Christian Du Mauré.  It also sets up the story to have secrets and mysteries while introducing just enough characters to make it an entertaining read.  The pacing is really good and its a definite page-turner. I fully recommend it!

Before I wrap up, I’d just like to end this with a little author bio of Denise K. Rago and where you can find her work: 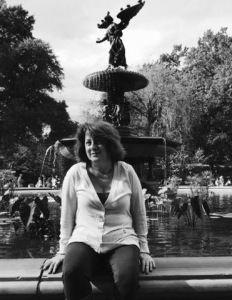 The Author in Central Park, NYC

Denise K Rago lives in New Jersey with her husband. A chance encounter with a mysterious stranger inspired her to begin Immortal Obsession, creating her vampire Christian Du Mauré.  The author is an avid reader and blogger, with a passion for art museums, Central Park, the French Revolution and all things vampire.

She puts them all to work in Immortal Obsession as well as the sequel, Blood Tears.

Where to find both novels.