While I had to figure out why one of my ebooks didn’t transfer well onto Kindle, I bumped up the next book and started reading the third instalment of the Everville series called The Rise of Mallory.

I’ve reviewed the first and the second HERE and HERE respectively.

The Rise of Mallory (Everville #3) 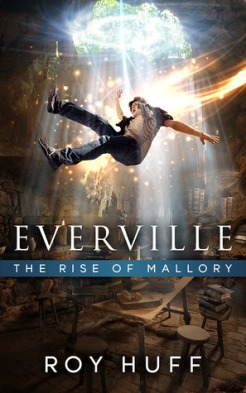 The fantasy YA series by Roy Huff is about an alternate world that exists where there is a war to keep the evil out as it continues to threaten its existence.  Some people in the “real” world (we live in) are gifted to know about this world and have the power to transport between the two worlds.

The Rise of Mallory picks up after the events of the second book, The City of Worms.  In the City of Worms, the goal was to protect Everville from the possibility of the destruction that the power the worms held inside them and to destroy it.  Although, it was overall destroyed with the opening of the Second Pillar by Owen Sage, the main protagonist of the series, there were consequences that leads us into this instalment.

Owen and his friends are living with the remaining of effects and trying to get past all that has happened, except Owen suddenly gets contacted by The Second Pillar in the form of his father telling him that The City of Worms has some leftover business that he must attend to.  There are shady characters in play and they have a big plan to destroy Everville in hopes of gaining more power.  The obsession over this power has made this Fron (inhabitant of Everville) turn bad.  With that, Owen sets off to find the Third Pillar while also having to figure out the mysteries of not only why his father is possibly The Second Pillar and also certain events that went on in the past two books.  I’m going to stop it right here because in case,  you are reading this, I don’t want to spoil anything.

The reviews for the past 2 has been a while so I’ll go into a little recap to say that the first wasn’t so great because it was a bit confusing when dealing with the real world and the Everville one along with the whole The Other in Between and all that stuff.  The second one was lacking because of the pacing being a little bit lagging.  Although not perfect, the first two does show potential and set the stage for somewhere to rise higher in the next novel.

The Rise of Mallory is the best of the 3 books so far. Why do I say that?

1. It has a good length and fantastic pacing
2. The story flows perfect with the last and answers a lot of questions while leaving room for further mysteries
3.  It keeps the different story lines going on at the same time very well that its not confusing
4. The fantasy world of Everville introduces the “worm” which turns into something cool and just exactly what every fantasy story needs
5. There is some character development for Owen especially.

Although it has a lot of great stuff going for this Book 3,  there are a few aspects that fell short for me.  I’m still adapting to the writing style.  Its definitely improving and more engaging and intriguing but its still something I’m adapting to.  Aside from that, its really this one part that comes as a surprise but that part is a little rushed and doesn’t give me the feeling that I was supposed to feel to connect with Owen’s character.  These are really the bits that bothered me a little bit but overall, its the best out of the three.

Everville is imaginative and fun.  Roy Huff may not particularly have the writing style that I’m used to but he does have a really great premise going with reality and Everville.  He uses the simple terms that we use everyday to show the enemies and I appreciate that a lot.  The enemies are quite simple called Them and the lingering space is The Other in Between.  Sure, there’s some other names (like Fron that I mentioned before) but travelling to Everville with Owen is never dull plus every Pillar has had something valuable to offer.