This week, I plan on getting through 3 movies on Netflix that are going to expire on December 1st.  I decided to choose the first one using the highest RT Score and it happened to be Children of Men.  I’ve read a few positive reviews about it recently so it was one I had already planned to watch.  Knowing that Alfonso Cuaron, director of Gravity that I recently watched, loved and reviewed HERE was also the director for this one made it even more motivating. Lets check it out! 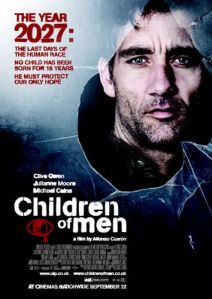 In 2027, the youngest member of the population Baby Diego dies at the age of 18.  There hasn’t been a child for eighteen years as the women have become infertile.  This causes chaos.  An activist group has now found a miracle and their leader, Julian (Julianne Moore) seeks the help of her ex-husband Theo (Clive Owen) to help get papers to help them transport a pregnant girl, Kee (Clare-Hope Ashitey) to the Human Project, a refuge on the sea that tries to find a way to build up the population again.

Children of Men was an unexpected choice for a Saturday night Netflix pick.  I hadn’t intended on seeing it but it turned out to be a very good futuristic chase thriller. Children of Men is well-rounded with a thought-provoking script, a good amount of action, and portrayed with a great cast. 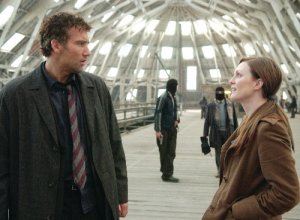 I’m a huge fan of the cast.  I’ve seen some decent works from Clive Owen before (with one exception being The International *grimace*) I hate that one but in general, he’s great at these sort of thriller roles with a bit of action and suspense, fighting for a cause, etc.  He’s a pretty great actor and most of the time, he pulls me into the story effectively.  In this one, he plays Theo, a man that numbs his life with alcohol after his son passed away years ago.  He doesn’t really care much about whats going on but he gets pulled into this whirlwind of crazy when he decides to help his ex-wife and realizes that he’s in something that seems to be more than it actually seems.

My favorite part of the cast is Michael Caine.  Stick him in any movie and he usually is my fave part.  He is a phenomenal actor and in this one, he has some funny lines to loosen up the pretty tense situation. Although, the supporting actors and actresses didn’t get such a crazy amount of screen time, they did contribute in their small way with their great acting to give some substance to the thriller.  Julianne Moore had that same sort of effect. 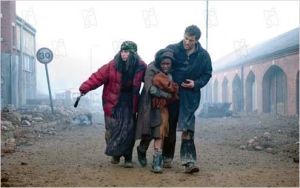 Overall, Children of Men is an engaging thriller that touches on an interesting story about a possible future where humans are bordering extinction.  The drama and the struggle behind keeping mankind alive to bring hope for the future.  Although even now, I haven’t quite figured out if the first 30 minutes was just slow so it felt long or it was so much information overload that I felt tired.  But I promise, the following hour after that is pretty awesome! Plus, I didn’t know Alfonso Cuaron by name until Gravity but suddenly I realized he also made one of my fave parts of Harry Potter (I love the 3rd one).  So yes, I do recommend this 🙂

Are you a Clive Owen fan? Whats your favorite role of his? Did you see Children of Men?

YAY! I applaud myself (and my boyfriend) for FINALLY making it to the theatres and getting this review up after so many days. We had to make a choice between Gravity, Ender’s Game and Thor 2.  You already know which one won.  Hopefully, I will still catch the other two, because as much as I love outer space, I have been looking forward to those equally as much (if not more). Lets see what Gravity is all about (although I am slightly late to the party and pretty much everyone else has reviewed it)… 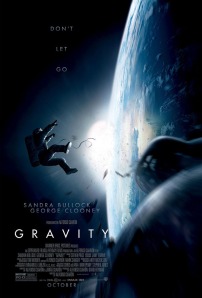 A medical engineer and an astronaut work together to survive after an accident leaves them adrift in space.-IMDB

I know I’m being lazy. I’m writing too much, my brain has stopped functioning on the level of writing reviews.  However, that description from IMDB pretty much covers the story of Gravity.  The medical engineer, Dr. Ryan Stone is played by Sandra Bullock and the astronaut, Matthew Kowalski is played by George Clooney.

Lets start by saying that I liked this movie a lot.

I’m sure all of you have heard already how amazing this movie is: visually stunning is one that is agreed by everyone.  There really isn’t anything that quite compares to the grand visuals in Gravity.  It is so captivating. The scene from outer space looking back at Earth, the whole motion, the debris flying.  Everything was out of the world. Just that was worth the ticket price.

Of course, any movie is not just carried by their visuals. I’ve been watching so many thrillers that it seems to be hard to get me engaged as easily.  However, its hard to not be with this one.  For one, its set in one of the most mysterious unknown so everything is really out of their control.  It kept me completely at the edge of my seat because of the intensity for one (if not because I had a dog bumping the back of my seat throughout the movie, thank his genius owners). The whole movie doesn’t really have many relaxing moments.  Its just constantly watching to see what the characters will do next, how they will react, what crazy thing will happen next.  The whole “zero gravity” really gives this movie that intense atmosphere. For those who have seen it, you know that last scene, my eyes were watering up from the overwhelming feeling of not knowing what would happen.

A plus for me has to be that I love Sandra Bullock.  She’s one of my favorite actresses EVER! My boyfriend doesn’t feel the same way about it but this movie changed his mind just a bit.  As usual, Sandra Bullock is awesome and I love her as Dr. Ryan Stone.  She grasps her role very well.  The nerves from being on her first mission, the intense feelings she has churning through her and the whole channeling the meaning of life and simply the importance of surviving: her character actually was quite complex.

I didn’t care too much about George Clooney but he was a character that brought some sort of calmness in the midst of tension and chaos. It was helpful that way.  What works for Gravity is that its not extremely long and it always keeps the action going.  Right when we think things are going to be okay, it comes around and gives you another problem.  The last scene had to be one of the most tense, nerve-racking, heart pounding scenes that I’ve ever experienced in any movie.

Gravity is a movie experience very much worth the time and effort to go check out at the theatres.  Its meant for the big screen and it will be visually stunning and extremely compelling.  Its thrilling and engaging.  I highly recommend it and if you haven’t seen it, then its one I’d say is very much worth your money.  🙂

Have you seen Gravity? Are you into space adventure/thriller movies?