One more movie before we get to the Academy Awards tonight.  I usually don’t do reviews on the weekends but I couldn’t turn away the opportunity to watch Spotlight and it finally was available for rental.  Oscars’ choices seems to be some dreary topics, right? The Martian is comedic and Mad Max: Fury Road was action-filled and entertaining but for the most part, it seems like some serious stuff going on (as usual, not even sure why I’m surprised).

Enough of my rambles, let’s check it out! 🙂 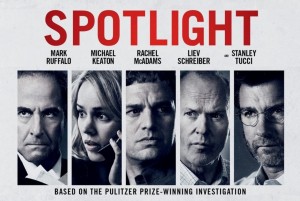 The true story of how the Boston Globe uncovered the massive scandal of child molestation and cover-up within the local Catholic Archdiocese, shaking the entire Catholic Church to its core. – IMDB

This year’s look at Oscars movies has possibly been one of the most successful and possibly one that has brought on a lot of movie discussions in my home with my husband.  While there is no doubt that the other movies were powerful, Spotlight brought out a very dark side of religion and faith.  It looks into a story that highlights the ethics and the damage and the age-old system that has its flaws.  Spotlight makes it about the system and revealing the facts of the story and the struggles of finding the information than about the people that are looking for the information.  We don’t really know anything about these reporters but rather we know about the victims and the issue that is being covered up.  Its for that Spotlight highlights the issue really well and tells this investigative story effectively.  Making it possibly, the movie so far that has impacted my thoughts the most.  It also highlights the fact that sometimes we get masked by our society and challenging the authorities that sometimes an outsider can see much clearer. 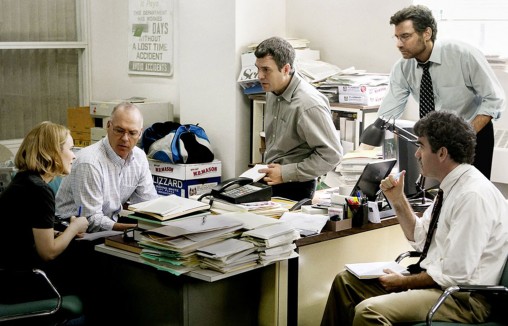 Spotlight carries a lot of subtlety.  It has a quiet yet beautiful score in the background which is only noticeable in transitions of scenes but most importantly, its full of a quiet cast that works towards uncovering this investigation in their respective characters.  Spotlight is a talky movie.  Its a lot of looking at details and slowly uncovering what is hidden underneath.  The opening scene does a good job at setting the stage of the issue while the ending keeps the issue at its core and keeps you pondering a little on what you just watched. Honestly, this whole thing about looking at the issue of molesting children in a religious rank truly made me starting being disgusted about the whole situation but also at how it was covered by so many people who really just wanted to protect themselves but most of all, it always angers me when its about taking advantage of children who really don’t even know how to defend themselves.

Although its hard to tell who stands out more in Spotlight out of the cast, Mark Ruffalo definitely makes an impressive performance.  Along with Michael Keaton and Rachel McAdams, the three have a good bit of screen time.  Spotlight is the group and therefore they should be the centre of the news, even if it was all started by Baron played by Liev Schreiber.  I’m always a fan of Stanley Tucci.  He only had a supporting role as usual but he was a key character in this story and he carried his part very well.  The ensemble did a great job in making sure that the story was the forefront here.

Overall, Spotlight is a great movie, carrying a story that highlights on religion, ethics and the wrongful and corrupt handling of a situation and how authority plays a big part in communities.  The story is the focus point and it makes sure to highlight the impact and damage this has caused and the cover-up and keeping many things as subtle.  Its hard to write up about this, in my opinion.  With some solid performances and a solid script, Spotlight is an outstanding film.

Have you seen Spotlight? What do you think about it?