Hello, everyone! I finally made my way to the theatres thanks to a very lovely  Cineplex week of cheap Tuesday price all week long! I just had to take the opportunity to go and since I’ve been wanting to see Mission Impossible: Rogue Nation since forever, this was the perfect time to go! I went with my friend on Wednesday night, ran over there after work and made it just in time with a little bit of time before TimePlay started.

There was only 3 people playing TimePlay but I got 1st place! Woohoo! 😉

So, allow me to do a rant before we start this review so I can get this off my chest! If you don’t want to read it, simply scroll down and start reading where the poster starts 🙂

Some of you that have been reading a good bit of my reviews know that my theater visits have been…eventful.  I mean, when I went to go see Gravity, there was a dog in the theater.  That’s an extreme case.  This time around, I had to be extremely proud of myself for controlling my urge to toss my apple juice bottle at the couple sitting like 4 seats away.  I have no issues with young couples.  I’m even cool with PDA.  BUT, the theater is NOT your living room.  You do not commentate in a voice that you think is whispering but I can hear throughout the movie, especially in the quiet talking parts.  Two, you can make out on your living room couch but not the theater even if its in your dark little corner especially when your f**king seats creek every single time you shift.  Subtlety is your best friend in that situation.  I kid you not, these two love birds were non-stop the whole time.  When the movie was in their discussion part, no music, quiet, I could hear them even clearer and those lip smacks and that vibe of, “I want to rip your clothes off right here and then” was travelling straight at me a few seats away.  So no, if you intend on being inappropriate, don’t go to the theater, wait for the damn movie and rent it.  Then you can do whatever you so wish and NO ONE will give a crap! If you do decide to go to the theater, then have the common courtesy and shut the f**k up! You might not give a shit about the $7 spent on this movie but I went to see a movie, not hear you smooch and chat and comment and whatever else all that noise was. RANT OVER!

Ethan and team take on their most impossible mission yet, eradicating the Syndicate – an International rogue organization as highly skilled as they are, committed to destroying the IMF. – IMDB

The Mission Impossible series fell a little short for me in the middle but it sure did pick itself up in the last one, Ghost Protocol.  Now, that one had me all pumped about this one.  Sure, Tom Cruise went a little cray-cray with his scientology but there is no doubt that he is a respectable action star.  One that doesn’t seem to be leaving this world of adrenaline pumped scenes.  And Rogue Nation is full on proof that his stunts are more and more dangerous every time.  Excuse me as I catch my breath just thinking about a few of the scenes. As disturbing as my theatre neighbors were, they only ruined my movie experience and not so much the movie.  Mission Impossible: Rogue Nation is a lot of high octane, adrenaline rush, blood pumping fun rolled in with some fantastic moments that kind of break the intensity a little.  In parts that you probably shouldn’t laugh, they give us a reason to just relax for a sec. That is all thanks to a wonderful cast that mesh so well together. 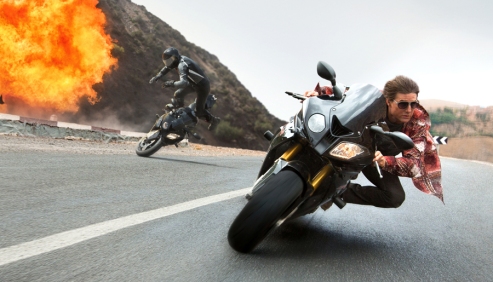 Tom Cruise is the star here but there is no doubt that his IMF team is equally great.  Benji, played by Simon Pegg is hilarious all the time.  When he is scared, he makes us laugh even more.  And then we have the absolutely stylishly cool but funny one liners in Ving Rhames.  Making up for the authority in the IMF is Jeremy Renner who has a much smaller part this time but whenever he shows up, he makes up for some good laughs.

This time, we toss Alec Baldwin in the mix as CIA essentially dissolves IMF and then takes over their people and is this authority that really doesn’t believe much.  But he definitely isn’t the highlight.  New addition highlight goes to the new girl Ilsa, played by Rebecca Ferguson who not only is pretty and sexy but also a rather good actress and has some really great action scenes. I guess we can’t talk about her and not talk about our bad guy in this installment, Solomon Kane, the mystery man behind the elusive Syndicate that is played by Sean Harris. While I was not exactly sure about him and his bad guy role, I think as a villain, he was convincing enough mostly because we never really knew who he was and even when he was around, it was never long enough to figure him out completely.  That sort of mystery keeps the plot going as to what the Syndicate is and who this man is and what in the world he is after.

What we can’t ignore is that while the characters are fun and entertaining or twisty and mysterious, there is no denying that the sets they did and the location they chose were fantastic.  The shots are just so nice to look at whether its in London or Venice or wherever else they went.  The mood fit what they wanted to do.  Everything worked very well together. 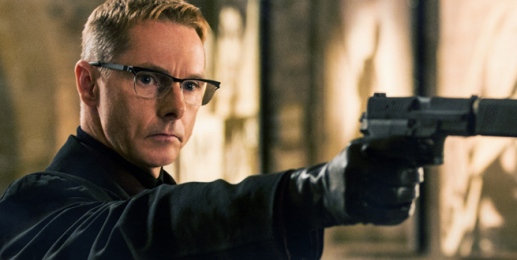 Overall, Mission Impossible Rogue Nation is a lot of fun.  The IMF crew with Ethan Hunt, Brandt, Benji, and group are as always funny and entertaining.  Their chemistry is really great.  The new additions are nice as well.  I kind of think that the villain could’ve been a little better but what he represents was mysterious enough to keep me guessing what the end goal was. Best of all, the action sequences are intense and dangerous, exactly what we expect Tom Cruise to do and he delivers those adrenaline filled sequences remarkably. Its the fifth outing for Mission Impossible and I’ve got to say that I really look forward and hope to see a sixth installment.

Have you seen Mission Impossible Rogue Nation? What did you think about it?