Gone Girl is my most anticipated movie of 2014.  Its also one of the Top 5 favorite novels (if I had to rank my faves).  My neighborhood Cineplex only had the English version in VIP section so my boyfriend and I went to go check it out on a cheaper day. Its not the genre of movie I’d choose to go see at VIP but I just had to see it.  With a cast that I felt was perfectly casted and a director who is masterful at this sort of thriller, to say that I was excited would be a huge understatement. The only thing was to try to not let my high expectations get the best of me, which was going to be hard.

Lets see if Gone Girl lived up to my expectations, shall we?

Amy Dunn (Rosamund Pike) mysteriously disappears and suspected to be murdered on her wedding anniversary.  Her husband, Nick (Ben Affleck) comes home shocked to see the mess and calls the police.  As the investigation lead by Detective Rhonda Boney (Kim Dickens) gets further, all suspicion lands on Nick.

Gone Girl is a very unique story.  I remember reading this novel as one of the novels I was so hooked that I read into the late hours of night because I just had to know what was going to happen.  The novel was a one of a kind experience because of the layout of the story and the characters involved and just how it was so twisted.  You can read my full review of the novel HERE.  Whats a good fact to have, if you don’t already know, is that the screenplay is written by the author of the book, Gillian Flynn.  In my opinion, Gillian Flynn is quite the author because she’s written 3 novels and although the first two are not quite as epic as Gone Girl, they still are page turners. Now that I’ve gotten my fan girl moment out of my system. You can all get where my expectations kind of come from.

The best way to walk into Gone Girl is with as little knowledge as possible.  I wanted to punch the morning radio the day that it was released when they went extremely in depth with the synopsis.  You learn all the twists before it happens.  I didn’t even bother to watch the trailer for this one even though I’ve already read the book.  Too much information would ruin this for you.  Actually, I’m giving you a perspective from both me, as a reader that loves the book and well, a bit from my boyfriend’s perspective who knows absolutely nothing about it but still agreed to go with me. Other than the two guys next to me that kept pulling out their phones and had these flashing lights throughout the movie and was bothering me so much, the movie still was one of the best adaptations I’ve ever seen.  David Fincher’s directing teamed with Gillian Flynn’s screenplay put this Gone Girl story effectively on the big screen. I was captured by the movie (despite outside distractions) and how they structured it while my boyfriend, without any knowledge was still thinking about it till last night (which was the last I spoke to him).  Plus, the little changes they made were effective for movie purposes while keeping the most important parts and the message the original story was trying to send. Without diving too much into spoiler territory, the beginning and ending of this movie will make you feel like in a very awkward way that it completes itself but makes you think about the deeper issue because it really gets under your skin. 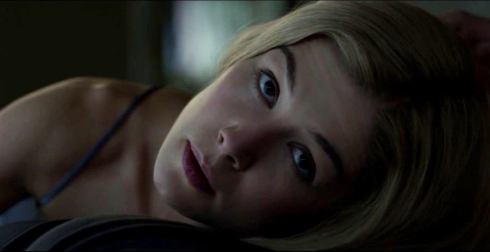 One of the most important parts of making Gone Girl succession is casting the right actor and actress to play the roles of Nick and Amy Dunn.  Some may not agree but although, I don’t have a very fond appreciation for Ben Affleck as an actor (although I do love his directing efforts), I saw him fit perfect for the role.  His expressions, the on screen feeling he can pull off was perfect for what Nick needed to be, especially when caught both in the attention of the media and the police under the suspicion of murdering his wife.  The desperation and despair was one that I saw him doing perfectly.  Ben Affleck certainly didn’t disappoint me and as Nick, he was absolutely amazing to watch as the story moved forward and it required a lot of the range that he had as an actor.  The other star of the show is the missing Amy, played by Rosamund Pike. I’ve only ever seen her in Pride and Prejudice and Jack Reacher (and thats the ones I remember her in) but this role was something completely different for her.  I think thats what makes this even more epic is that the cast was chosen for something they don’t usually do and these two characters are so multi-layered but developed so well.  A perfect cast needs phenomenal acting and the rest of the cast does a compelling job from Neil Patrick Harris’s role as Amy’s high school boyfriend to Tyler Perry playing an elite lawyer.  They all have roles that bring something to this entire plot.

This is possibly the best movie I’ve seen this year and seeing as it has such high expectations on my part and there were outside distractions, the complex story, the smart direction and compelling cast are also matched with a suspenseful score and the tone they set is just so awesome.  Gone Girl is a must-watch for this year whether you’ve read the novel or not.  The changes add to the story and its impact and most of the time, they are so minor but so much more powerful.  I highly recommend this but I also suggest that you go in with as little knowledge as possible or how they set this up.  This is a mind-blowing thriller and thats really all I have to say about this.

Have you seen Gone Girl? Did you read the novel? What do you think of David Fincher? Did you think Ben Affleck and Rosamund Pike was made for this role?