Next up in the Halloween Marathon is one that I’ve hesitated to watch in fear of how violent and disgusting it would be, The Loved Ones.  I’ve read a few reviews from other bloggers and its rated extremely high on Rotten Tomatoes with 98%, so consider me curious. 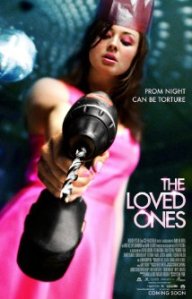 Prom night is just around the corner.  Brent (Xavier Samuel) and his girlfriend Holly (Victoria Thaine) have decided to go together but before he leaves school, Lola (Robin McLeavy) walks up to him and asks him which he rejects as he already has a date.  However, after an argument with his mother (Suzi Dougherty), he runs off and unexpectedly, is kidnapped by Lola’s daddy (John Brumpton) who brings him back to their house to have their own version of prom night in an extremely violent way.

After this movie, I think I need a break from these crazy sadistic torture horror genre.  It feels like thats all I’ve been watching at night.  The Loved Ones is a cringing horror movie.  I’m just happy that gave it a good balance of side story to lead up to the actual story of what was going on. This flick is totally messed up but in the good effective way.  It was just so intense. Plus, it has a relatively short run time, which is one of the reasons I chose it so it paced itself really well. 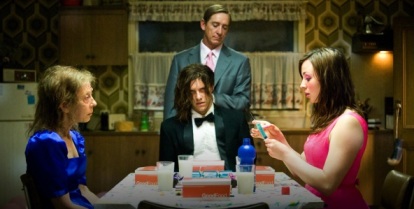 The characters and the actors/actresses portraying them all did a remarkable job.  Lola’s character was portrayed by Robin McLeavy and let me tell you, from that quiet girl that got rejected at the beginning of the movie, the next time around she had flipped the switch and instantly insane mode ON! She was just really crazy and her expressions, body language, tone of voice and her obsession with pink rolled into one made for a pretty creepy character.  And then there was the John Brumpton who played Daddy.  This guy is just out of the world.  I’d say he delivered the best performance because you can literally see insanity in his eyes.  Thinking about it now kind of makes me a little scared and while watching him in action, I was really squeamish.  You just can never predict what him and Lola would do to Brent.

Now that we’ve gotten the nutso father-daughter team out of the way, we need to take a look at Brent, played by Xavier Samuel. Brent didn’t have a lot of dialogue after about 30 minutes of the movie but rather his body language and reactions was what made the audience know how he felt.  I find those roles extremely tough because to carry a message forward like that means the audience needs to understand and connect with the character.  I found that he did a remarkable job as well. Believe me, I was rooting for the guy to get out of there somehow and you can almost feel his pains in certain parts.

Overall, the concept was pretty original as it meshes torture, a pretty memorable/innocent moment turned bad, and just total crazy.  The acting was outstanding and effective.  The whole thing was messed up and clever in its own way.  There was a good amount of intensity and spine-tingling moments as well as cringing ones.  It wasn’t extremely disgusting also but makes its point quite clear.  The story is done well and I’d definitely recommend it.  If you still have prom to go to, well, maybe you’ll think it through a second time before you say no. 😉

Have you seen The Loved Ones? What did you think of it?