Oscars is finally over and we’re back to somewhat normalcy here.  Ultimate 80s Blogathon still has the priority for the next two weeks however I’ll be catching up on all those book reviews I’ve been meaning to post. Trust me, for someone who should be slowing down on reading and focusing on other stuff, it had the opposite effect and I’m actually reading more. Anyways, that’s just me.

However, The Little Prince was an impulsive read because I wanted to remember the book and just whether I felt the same magic I did when I was a child reading it or being read to.  The afternoon before we headed to the theatres to check out the movie, The Little Prince, I took an hour out and did just that. The cover I’m using here is not the version I used because mine is a really old one that one of my mom’s pen pals sent to her decades ago but it looks similar.

Let’s check out this rather short book (86 pages and that’s including pictures)!

Moral allegory and spiritual autobiography, The Little Prince is the most translated book in the French language. With a timeless charm it tells the story of a little boy who leaves the safety of his own tiny planet to travel the universe, learning the vagaries of adult behaviour through a series of extraordinary encounters. His personal odyssey culminates in a voyage to Earth and further adventures.-Goodreads

The Little Prince is technically a book for children but I wonder if I ever actually got the idea of what it meant. I sometimes even wonder if I read the book to the end instead of just in parts.  Reading it through as an adult is a rather awakening experience.   As a blogger, I live in a world of imagination and creativity.  Everyone in the blogasphere is creative in their own way.  We are pretty much writers and reviewers and we express ourselves every time we publish a post.  A part of us is in another world of dreams and imagination.  From experience a lot of us appreciate moviemakers or writers that are able to put a twist to whatever story.  The Little Prince is the epitome of creativity and imagination.  He embodies the idea of never growing up and staying naive but absorbing what the world has done through the eyes of a child and then we are contrasted with the views of The Aviator who is an adult and never really quite understood the adults and their doings for matters of consequence, as he puts it beautifully. The Little Prince is a journey of realization that our inner child is a part of us that many have forgotten but always resides there to help me remember the simpler things. 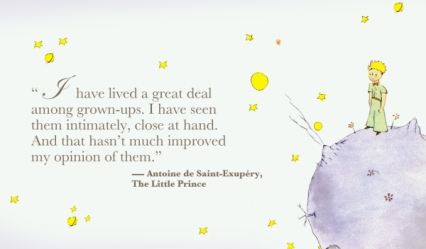 Its hard to talk about The Little Prince because most of it is felt.  Its lessons that The Little Prince and The Aviator picks up as the story goes along.  The Little Prince teaches us to see between the lines and that there is hope in a lot of nothing (like the hope in the desert is finding the well). At the same time, he teaches its younger audience the value of patience that its what builds friendships and what it is to “tame” someone and makes them important and unique in our lives. It teaches us that actions are far more important than words.  Its also teaches us that seeing past the simple minute things also means that you see more than others do. It shows us that the world is full of flawed people, they gain unpleasant traits like conceit, foolishness, greed, etc. however, they also have their stories and purposes. And most of all, there are obstacles in all our paths and sacrifices we must make.  It gets a little heavy for a children’s book but it also works well for both adults and children relatively well as each will pull something different from it.

The Little Prince doesn’t really need to be said anymore.  I only remembered being mesmerized by The Little Prince or what little knowledge I got from the book when I was a little girl.  Reading it again was a refreshing feeling.  It is a bittersweet book in many ways but if you think about it a little harder, maybe the author’s trying to tell you that there are two sides of any situation.  We can choose to embrace our inner child, believe in the more positive way to look at things and just have hope that there is a better tomorrow.  I might be stretching it too far but we all interpret books in our ways based on our own experiences.  That is what makes this so fantastic.  The Little Prince is just a beautiful book that really surpasses any test of time.

Have you read The Little Prince?