Moving along to the third Halloween in the series called Season of the Witches.  Both my boyfriend and I haven’t seen this before but he told me that he hasn’t heard good things about it though. Lets see what I thought about it… 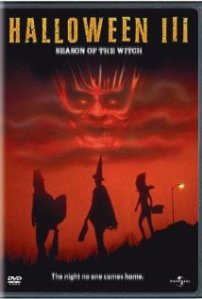 About a week before Halloween, a man escapes from something horrible and is brought to the emergency at the hospital.  After being treated by Dr. Daniel Challis (Tom Atkins), he is murdered.  His death brings along his daughter, Ellie (Stacey Nelkin) who is determined to seek out what caused her father to be killed and asks for Daniel’s help.  As they follow the clues, they realize that this involves a big mask manufacturing company and their scheme to mass murder kids on Halloween with new technology. 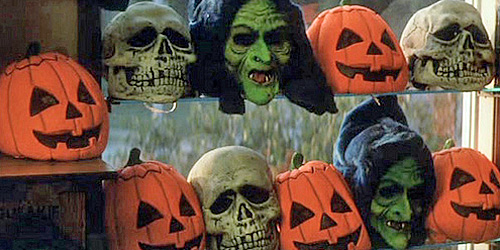 I’m not even really sure if I want to write this review.  Halloween 3 is just weird and in a pretty bad and confusing way.  Plus, it wasn’t even really exciting and I was a bit tipsy when I was watching it on top of that, so all I wanted to do was sleep.  Still, I stayed awake and made it through.  On top of that, there were some disgusting scenes.  Not something you want to watch during dinner. Its a horror sci-fi essentially and the concept was just so random to be even considered part of the Halloween series.

Not only did the story have nothing to do with the previous two and wasn’t enjoyable, the characters and the actors portraying them weren’t all that impressive either.  There was a lot of over the top acting for one.  Maybe the movie in itself was like that so it was just reacting to what happens.  I don’t know any of these actors before this movie and if I did, I didn’t spend the time to research it further.

Overall, this movie has no continuity as we don’t even have Michael Myers in it but just a bunch of masks with weird technology that kills.  A lot of random illogical parts put together and it was just an awkward situation.  It doesn’t really have many scares but just disgusting stomach turning parts. There’s really nothing I can actually say about this more.  I’m still a bit confused as to why its part of the series.  Watch it if you want the weird touch of sci-fi but its nothing special to me and I’d probably never watch it again.

13 thoughts on “Halloween Marathon: Halloween 3 Season of the Witches (1982)”