First review (out of 2) before the August recommendation month officially starts 🙂 Watched this before I decided to do that!

I just realized that I hadn’t done a review of the 2nd Alvin yet but if you are interested, you could check out the review of Alvin and the Chipmunks HERE!  Honestly, after the second one didn’t really do too well for me, I’ve been hesitating to watch the third one: Alvin and the Chipmunks: Chipwrecked.  There’s only so much of chipmunk singing pop songs that I can take before it gets old.  But hey, it was on Netflix so means I technically am watching it for free since its in my first month of subscription! Why not, right?  Lets see how it was…

Dave (Jason Lee), Alvin (Justin Long) and the Chipmunks (Simon (Matthew Gray Gubler) and Theordore (Jesse McCartney)) and Chipettes: Brittany (Christina Applegate), Eleanor (Amy Poehler) and Jeanette (Anna Faris) are going on a cruise for some R&R before their performance at the International Music Awards. On the ship, Dave sees  Ian (David Cross), who is now a pelican mascot for the cruise ship, Ian vows to watch the chipmunks closely to plot revenge and get them kicked off the ship.  After some mischief with Alvin, they get banned to one area of the ship. When Dave falls asleep, the chipmunks crew accidentally end up flying off in a hang glider and ends up on a deserted island.  Due to this, as Dave was trying to save them, Ian gets involved and they also end up stranded in the ocean and eventually find the island. Determined that he will find the chipmunks on the island, he sets off with Ian to find them while the chipmunks are learning their own lessons and making acquaintance with a girl, Zoe (Jenny Slate) thats been trapped there for almost a decade.

How would I describe this movie? There was a lot of chipmunks singing, for everything and everywhere.  In the first movie, it was not that much singing and it had more of a storyline.  We hit this third one and its all become a lot of chipmunk voices singing to lead through every sequence. I think that affected this flick a lot. I get that its for children and probably young children but there is also the fact that Alvin was known to the 20s-30s crowd or whatnot.  I’m not exactly sure of the time frame.  That really made this movie really boring and man, it was long. 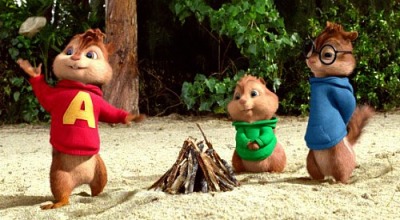 Plus, there isn’t much changes.  The only difference is that a different character learns the meaning of life in a different scenario.  The first one was about Dave learning to accept the chipmunks as families and learning to take responsibility and care for them as his kids.  Now this time, think parents teaching kids to grow up and the concept of responsibility and that the only way they learn is through making mistakes to learn to be grateful and more understanding for both Alvin and Dave.  Its also about learning to be courageous and at certain times, embrace being fearless for Simon.

This time around we bring in a new character called Zoe played by Jenny Slate who has been stranded on the island for eight to nine years. She’s not completely there and her friends are different types of sports balls and she names them with their brand.  Stealing ideas from Cast Away, right? “Wilson!!” Sorry, I’m having a moment right there.  She’s not a bad character though.  She just didn’t get a great script.

Overall, Alvin and the Chipmunks: Chipwrecked was pretty disappointing even though  I didn’t have much expectations.  You know I find positives in even the worst movies if you’ve been following my reviews but really, this one didn’t have much.  I just didn’t really enjoy myself and felt I might have wasted my time and almost turned it off.  I did tough it out till the very end.  At least Theodore got enough parts to keep me “aww-ing” over his cuteness 😉 I can’t get enough of him in these.  Just way too adorable! Who I recommend this to? Kids might enjoy it…I don’t have kids so I don’ t know but young kids might get a little more enjoyment than I did. It has a lot of good values and lessons to learn just its not really set for a wide age range.

How do you feel about Alvin and the Chipmunks? Do you know if they will be doing a sequel after this?