I’m sorry for the delay in the review for The Shining. Its always hard to write up for something so iconic. Its probably why I’ve never reviewed say, The Godfather. Still, its a lot of knowing how to word how I felt about it. I promise that it’ll go up tomorrow afternoon 🙂 So look for that The Shining review!

In the meantime, a few Netflix movies are about to expire on November 9th so I decided to give them a watch. For the most part, I’m keeping myself entertained with TV and I’m thinking of doing a little weekly recap on what I’m up to with that instead of always putting it in the Weekly Adventures. 🙂

Between making decisions of what my characters in the novel do next and the structure of it all, it doesn’t leave much time for decision making for the blog.  I’m trying to keep up with everything and this week will be quite eventful but we’ll see how I change it up for next week to make it all work out 😉

Without any delay, lets check these two movies out! 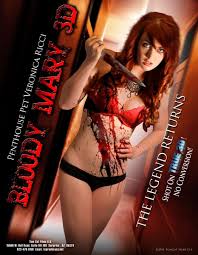 *Its Netflix, there is no 3D version just like Piranha DD was not 3DD

Mary Worth is murdered brutally by her religious husband, Matt Elias many years ago (IMDB says a hundred, the movie doesn’t say).  Before she died, she places a curse on him and his descendents.  In the present, during a music video shoot, Mary is accidentally released and she starts her seductive and manipulative ways to kill the present day Matt Elias, the star of the video and a rising rock star. 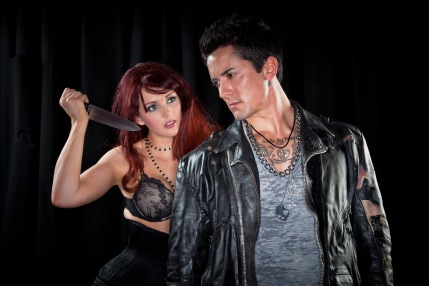 Bloody Mary is full of Veronica Ricci dressed in skimpy clothes or just nakedness.  How they revive Bloody Mary is pretty much a rip-off of Candyman.  The acting is terrible and worthy of a lot of eye-rolling.  The story is pretty bland and boring.  I actually put it as background noise because I didn’t even really want to see the kills because they weren’t that great either.  Its obvious that its extremely low-budget.  The only thing good, despite the bad acting was that Derek Jameson is a rather decent looking man. His character isn’t really all that good though so it was pretty ridiculous.

I don’t even want to waste any more time on this. Anyone wants this Bloody Mary thing for the next Shitfest.  Its promise you its perfect for it 🙂

Neal (Aaron Stanford) is an aspiring musician in the works to making his first album while managing a local friendly cereal bar called Flakes.  His girlfriend, Miss Pussy Katz (Zooey Deschanel) is an aspiring artist hoping that she can have her name known.  However, she wants their plans to not just be dreams and tries to convince Neal to take a break from the cereal bar to focus on finishing up his album. At the same time, their concept is stolen when another cereal bar owned by Stuart (Keir O’Donnell) opens up right across the street.

Flakes is a cute and awkward little movie about to two creative people who need to find a balance between what is a job and finding their career.  The concept of the whole cereal bar thing was really awesome.  I mean, its really cool because I’d think that if I saw one of these, I’d sit down and eat, provided they had lactose-free milk.  Its pretty interesting the whole long time cereal.  Although, I just always wonder if cereals have expiration date and all.  Health precautions, right? Putting some of the things that didn’t really make sense to me aside, the story was a little predictable and it wasn’t all that special but the characters were.

I love Zooey Deschanel and she’s always charming and a-dork-able to watch on screen.  Other than Christopher Lloyd as the owner of Flakes, Willie, who was pretty entertaining to watch do his thing. How do you beat the role in Back to the Future, right? But still, he’s fun to watch.  Aaron Stanford as Neal Downs was okay.  There is an interesting chemistry going on between Neal and Pussy Katz. You can feel the tension but the care between the two.  It shows how much they love each other.  Even though Pussy Katz does try to play destruction, I just can’t hate her because she really was just looking out for Neal.

Character-wise this was good and cute and fun.  The story wasn’t anything special other than the whole cereal bar thing.  Does it actually exist somewhere? Overall, its pretty average.  I wouldn’t mind sitting down and watching it again but I probably also won’t remember watching this one a few weeks later.

Have you either of these? I sure hope you didn’t waste your time on Bloody Mary but if you did and you want to share hate (or possibly love, because we all have different tastes), then go for it in the comments.  Love you hear what you thought! 🙂

Recently, I’ve been following this very awesome blogger called Steve from Steve Says… and he has this segment that I’m totally in love with so I decided join into the fun.

In case you want to join in, this is how it works:

Title your post “Steve’s Music Mix – …” and link back to this week’s page.

Let’s check how it worked out for me.

If I was stranded on a desert island…?

No kidding! If I was stranded on a desert island, my eyes would be open wide to make sure no cannibals live there or some crazy animals will come out to get me. Being the movie fan and having extensive imagination, what if there were actually dinosaurs or how about two headed sharks preying near the shore *shivers* Keeping my eyes open to make sure I find the perfect weapon to defend myself.  That might be a pretty good plan. Especially at night….

If I was the last person on earth…?

It would be a while since I would have a friend in this case. No one to say “so long” to.

When no one is looking, I…?

I start speaking in French or I just don’t care.  Kind of does make sense, right? Why would I care what I’m doing if no one is looking, right?

Its a bit harder for me to do this since my MP3 player is a bit funky with the shuffle function.  Still, its pretty fun! I’ll probably continue doing this.  Give it a shot and see what interesting answers you get for these question 🙂

In line with this, you can call me by my elf name- Cookie Plum-Pants.  Nice to meet you all.  I’m sure I can’t make any toys by the thousand at Santa’s workshop so I will result to testing for defective Jack in the Boxes and eating lots of candy. You can check out how to get your elf name HERE.  Lets start the last review in my Christmas Marathon!

Buddy (Will Ferrell) was raised in the North Pole at Santa’s workshop, mostly by Papa Elf.  After knowing that he is actually human, the reason why he can’t perform the elf responsibilities as well as the other elves, he learns that his father, Walter Hobbs (James Caan) is in New York City. He sets out to find his father and tell him about his existence and try to get him off the naughty list.  His habits are not the same as a big bustling city and he doesn’t understand the human ways. His ways leads to some humorous turnouts but also he searches for his true self in a city that has forgotten what Christmas spirit is.

This Christmas flick is always the finale of my Christmas marathon, mostly because its a really awesome movie and its one of my boyfriend’s favorites.  Its funny in a really silly way. I don’t usually buy a lot of that humor but for this, it manages to get quite a lot of laughs.  The more I see it, the more I enjoy it.  Will Ferrell is one of those actors whose humor isn’t always my type of humor, however, in this one, his role as a human raised in an elf world and adapting back to his own life really was amazing.  He did a fantastic job at it.  Humor is a very subjective aspect, what works for one person may not work for another, plus this one does it in a very nice family comedy.  Plus, it has one of my favorite actresses: Zooey Deschanel.  She’s just a sweetheart and when she sings “Baby, Its Cold Outside” or “Santa Claus is Coming to Town”, its just so awesome.

Similar to Polar Express, its circled around Christmas spirit.  The concept of believing is the focus: If you believe, you don’t necessarily have to see it.  Christmas is getting very commercialized and I feel that more and more every year, so to me, this movie touches a very important aspect.  Family, humor, music and altogether Christmas spirit: just a great mix for a Christmas flick.

Sorry for the late review.  I got right to it after I had a moment.  Hope everyone had a fantastic Christmas celebration with family and friends.