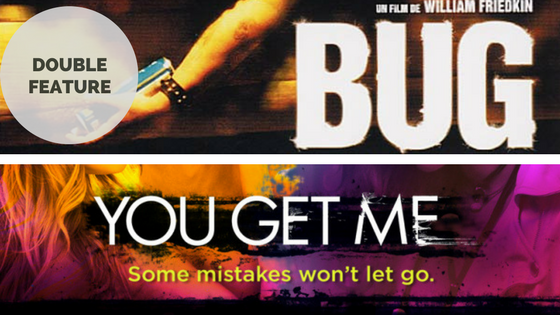 Another double feature here today! Tax season makes for a lot of background film watching. Gotta get something positive from the boring tax preparation, right? 😉

Two odd and random choices for myself since these two are two films that I wasn’t particularly completely invested in which was great for the criteria of being a background film. The first is 2006’s psychological thriller Bug with one of the debut roles of Michael Shannon played alongside Ashley Judd. Followed up by Netflix Original You Get Me starring Bella Thorne in a role outside of her normal bitchy high school girl, which is replaced by an obsessive character. I guess in some psychological way, these two do have something in common.

An unhinged war veteran holes up with a lonely woman in a spooky Oklahoma motel room. The line between reality and delusion is blurred as they discover a bug infestation. – IMDB

Where do I even start with Bug? In a completely spontaneous viewing, I checked out Bug on Shudder. What started out with something of generic story of a lady, played by Ashley Judd, hiding away from her ex,, played by Harry Connick Jr.  after he was released from prison and meets a stranger, played by Michael Shannon who she ends up falling in love with. Its easy to chalk this movie away in its opening moments but as the plot thickens once we start see the relationship between Ashley Judd and Michael Shannon gets deeper, it gets so much more thrilling than the threat of Harry Connick Jr’s character showing up. Although, I do have to say that I thought Harry Connick Jr did such a great job at being the ex. I’ve only seen him in some romantic drama with Sandra Bullock. I think it was Hope Floats (review).

The question here really lies in whether you believe Michael Shannon’s character and the conspiracy theory that he believes in…or is it the reality? The movie does a great job as his crazy actions expand to where Ashley Judd’s character believes it also. As they get more unhinged, the blur in reality and delusion (as mentioned in the summary above) is the key element of the psychological thriller and its executed in a pretty competent way. Right up to the end, even when some extra characters come into the scene, it proves the theory and then denies it and its just a crazy trip you take with these characters. Whatever you want to make of the ending will depend on how you would analyze the whole thing and get out of the movies.

Props here goes to both the wonderful cast here. It always baffles me how underrated Michael Shannon is because in every role I’ve seen him in, he just does a great job. Convincing and believeable role. The story is thrilling and full of questions and as these questions bug these characters, we are wondering what is the same thing and the reality and delusion. The more I think about it, the more I want to watch it again and see if I can pick up something else. 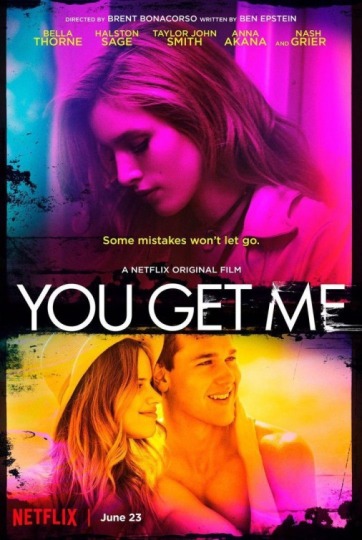 Tyler’s crazy in love with his perfect girlfriend Ali, but when a big fight makes him and Ali break up, he lands in the arms of sexy out-of-towner Holly who shows him a night he’s gonna remember. The next morning he finds that not only is Ali taking him back, but Holly is a new student at their school and is dead set on her new man. – IMDB

I’m definitely in a 50/50 feeling for this one. I guess it explains how I’ve never been more certain about giving this one a 2.5/5 on Letterboxd. You  Get Me isn’t particularly innovative. It leans into a lot of predictable territory. However, the execution isn’t all bad. They do some nice shots and a good progression from some sweet moments in the beginning that spirals more and more out of control. I’d have to say that a lot of the greatness in this movie is that to date (from what I’ve seen, haven’t seen The Babysitter yet), I feel like Bella Thorne delivers one of her best performances. She’s always been a fairly one dimensional actress where she is the bitchy self-centred teenage girl role. This time, she dumps the bitchy and brings in the crazy and man, she definitely delivers it.

Sure, You Get Me never really hits the dangerous levels because it doesn’t seem like it would step into something so extreme, even though Netflix Originals usually do get some extreme if they wanted. There are some nice sexy scenes. Other than Bella Thorne standing out and Taylor John Smith being okay as the male lead since he is a decently attractive dude, I wasn’t too on board with the monologues he did. It felt so unnecessary and preachy about life and whatever. It wasn’t his acting that bothered me but just the script for that part. It was trying too hard to be deeper than the movie actually was. There are some thrilling moments but unfortunately, its one that is easy to watch and had a few tense moments but still never reaches the potential it could have reached as it didn’t break out of the predictable territory.

That’s it for this double feature!
Have you seen Bug and/or You Get Me?