After a slight break with a whole backlog of posts needing to go up, I’m back on the 2015 reviews catch-up.  My new goal is to work on Oscars nominees that I can get to.  If I don’t get to everything, the Best Picture nominees have the first priority as long as I can get my hands on it. Its a bit limited but I’m trying.  I have two more lined up in the next two weeks before Oscars swings around!  First up is Bridge of Spies!

During the Cold War, an American lawyer is recruited to defend an arrested Soviet spy in court, and then help the CIA facilitate an exchange of the spy for the Soviet captured American U2 spy plane pilot, Francis Gary Powers.-IMDB

I love a great thriller now and again. I’m even okay with espionage sort of films because they can be really intriguing.  The deal with Bridge of Spies which made me hesitant to start it was the fact that its about war and hints of politics. Call me ignorant but I’m not one to love the reality of it all and it hits me really hard.  Going into Bridge of Spies, the possibility of me liking is not quite as high as the general public.  For starters, my husband loved this movie. I’m more of a meh.  There is no doubt that Steven Spielberg does a good job with the directing and Tom Hanks pulls a great performance.  Those are expected factors.  The breakthrough role here is Mark Rylance who is on trial as a Russian spy and yet he is such a cool cat. If you watched it, whenever he says “Would it help?”, it just changed the whole dynamic of the scene.  He turns into a character that seems to have such depth without even saying a whole lot. 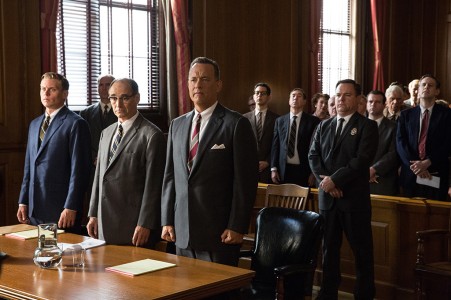 I took a few days to ponder over Bridge of Spies.  As you can see, I do praise this movie for being good.  The directing, the acting and even the story is good.  The script was well-written.  Except I can’t help but to hesitate in saying that I fully appreciated it, because I didn’t.  I know what is good but maybe its the length or the pacing or just the war and politics that didn’t grab me because I tried to watch this two times and I had to force myself to stay awake.  When I woke up, I was into the story right away but then I felt it a little tiring all over again.  The best part of the movie was the beginning and the ending.  Everything in the middle was good but maybe just not tight-knit and thrilling enough.  With a long movie, this one had to stuff in scenes that jumped from different places and honestly, I felt it was hard to follow since they never dwell long enough in one place to make it something I cared about.

The best aspect for Bridge of Spies was that it did capture the devastation of the East and West Germany/Berlin Wall and the touchy time that everyone dwell in.  Even the urgency and danger of the situation was highly evident when Tom Hanks’ character was in negotiations.  Other than that, it did well to highlight the selfish political choices and the contrast of what using an untrained citizen would make in the broader spectrum.  Tom Hanks character Donovan was a good man and really was simple.  He didn’t want to be in this but he made choices he thought was right and he was a very perspective man who stepped out of his comfort zone literally to do just that. Tom Hanks embodied that character really well. 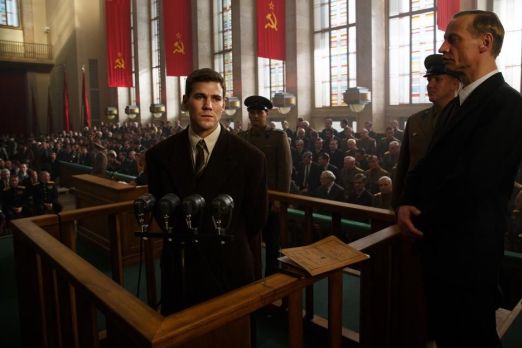 Overall, Bridge of Spies is a good movie.  The directing and the cast was great, especially when we talk about Tom Hanks and Mark Rylance.  The devastation and the desperation of the place and the situation was both captured really well also.  However, I can’t help but feel that something didn’t pull me in completely.  Maybe its the length being tiresome or simply the pacing was a flawed.  The better way to word it would be that at its high points, it was tense but at its low points, it was lacking the thrills. However, I do blame it a little on my lack of interest in war/political based espionage thrillers. I do think that Bridge of Spies is worth a watch!

Have you seen Bridge of Spies? What did you think of it?