Continuing on with my vacation adventures, Part 2 of the extreme self-made walking tour to make sure our legs would hurt at the end of the day is all about the Seattle Aquarium.

I love Aquariums and its always a blast to visit. The Seattle Aquarium is pretty big with a lot of walking areas inside and outside there are viewing areas for seals and river otters and sea otters.  We had a lot of time here mostly because I insisted that this place we don’t rush.  If they were going to rush, they could do the next thing without me.  My objective for Seattle was to go to the Seattle Aquarium so that was my one request.  Luckily, they didn’t ditch me because I would have regretted not going to the spot afterwards for the Underground Tour which I talked about HERE for a photo challenge a few weeks ago. 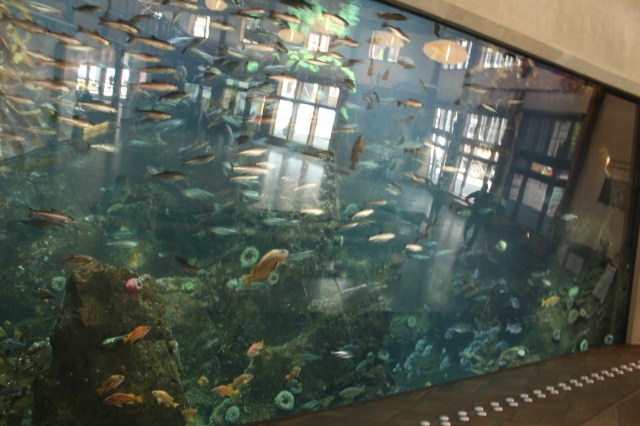 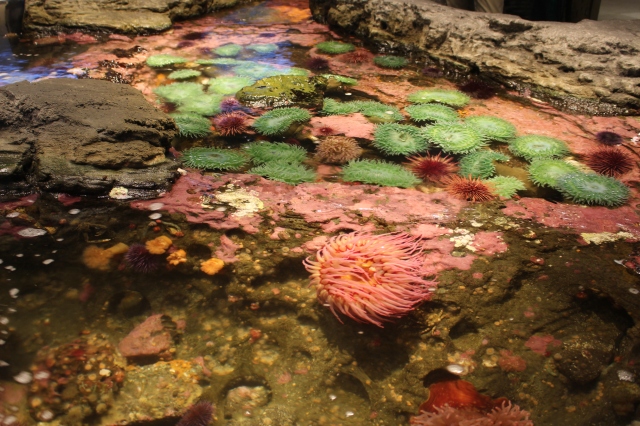 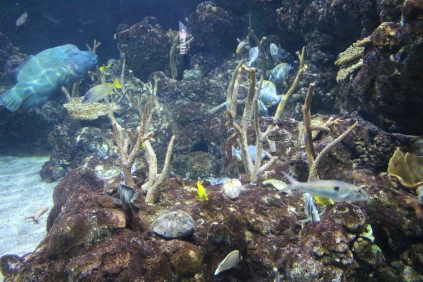 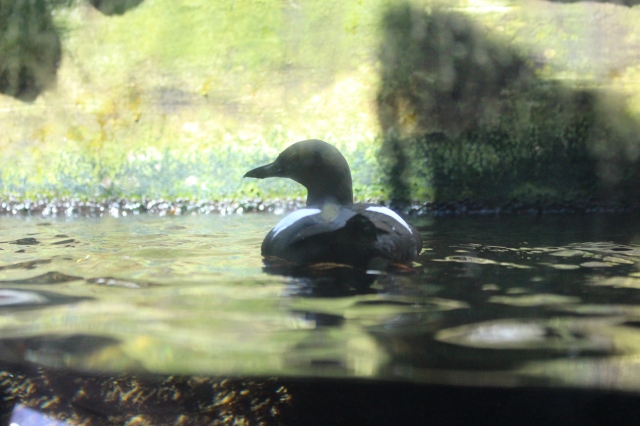 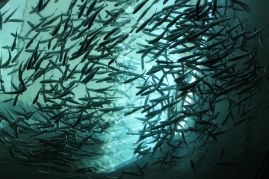 The actual Underwater Dome is just that last picture but I’m starting to get a little confused as to why there was more corals and sea creatures between after the Birds area.  I’m a little confused but you get the idea, right? 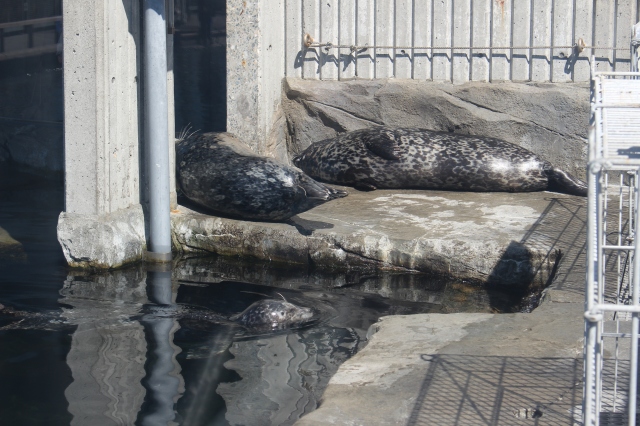 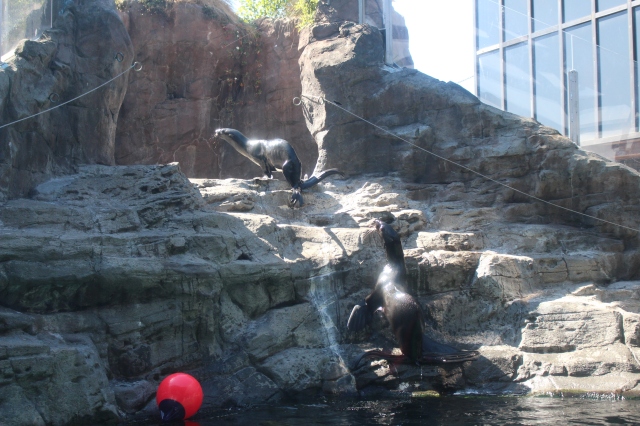 There really are no words for the Seattle Aquarium.  There were a ton of really neat corals and fishes and much much more. I loved it a lot! Its worth every penny.  The Underwater Dome made it hard to take good pictures but standing in it was really nice.  Plus, the seals and otters are really alive and happy.  It shows that they seem happy with the environment they are in since they come off as extremely playful.  You have the above and underwater viewing for those so its really well thought out.

Part 3 will be coming up to wrap up Day 1 of Seattle.  I just didn’t want to overload the posts with too many pictures.  I’m a little surprised Seattle took up that much time and we haven’t even started Alaska which will have a ton of different segments, other than pictures, one special segment that I’m getting stuff together for but I think it’ll be a finale and also my views on my first time cruising. Just a heads on what to expect.  My guess is this travel bit is going to span over the next month.

What do you think of the Seattle Aquarium? Have you ever been?

Seattle is a beautiful city.  The last time I was there, I was probably around 8 years old or something.  My only memory was seeing family and thats a pretty vague one at that.  So this time, its a totally new experience and with other 20 years, I’m guessing the change has been drastic even if I did remember. So we arrived two days before we boarded the cruise.  Day 1 was pretty much a lot of layover time in Toronto and waiting to get to Seattle and by the time we got to the hotel, it was like 10pm.  We already knew that the next day would be a crazy long walking day so official first day starts when all the touristy stuff begins 🙂

Like, I said, A LOT happens.  So this might just turn into a possible 3 part Seattle tour.  Some places won’t have too many pictures but the few spots, I liked more might merit a post of their own. Seattle was where I reunited with my DSLR a little more so there was a lot of bad shots as I tried to figure it all out again before heading onto the cruise and needing it for Alaska which was obviously the highlight of my trip in my mind! 🙂

I’m not huge on aircrafts and I’m far of knowledgeable on it.  However, this place is awesome if you are and even if you aren’t.  Our schedule was so tight and my mom’s friends were rather rushed that I found it sad that I was rushed to not get the chance to read everything there from space history to just all sorts of planes and whatnot.  It was so much to learn and see.  I tried to get as much as I could down but if I ever were to go to Seattle again, I’m definitely hitting the Museum of Flight again just to be able to do a proper tour of everywhere without have to try to catch a 2 hour transfer to save a bus fare because I felt like I lost more than $2.50 or whatever the fare was by leaving so early.

Next on our stop is catching the bus to head into the International District/Chinatown for lunch.  Its kind of a Chinese thing to want to visit how developed Chinatown is wherever else we go. 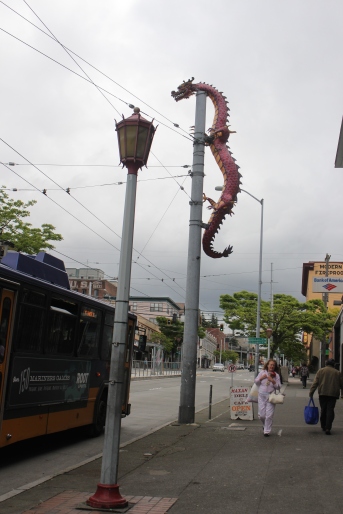 We ended up asking a random Chinese lady and she was super nice and actually took us possibly the most crowded restaurant in Chinatown that we walked past for dim sum and even managed to get the hostess to find us a table.  Definitely lucky there! 🙂 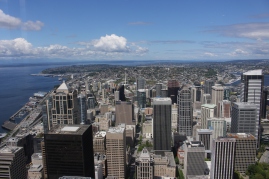 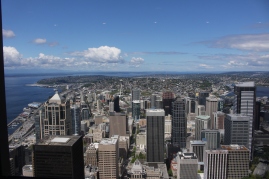 After some research, my mom’s friend suggested that the best skyline view of Seattle was Skyview Observatory and not the Space Needle.  I had no objections because c’mon, that view was amazing.  And in the last picture, we even got an idea of where we were to board the ship the next day.  Granted, we were going to walk past it later on in the day.  It was all in our schedule to scope out the area in advance 😉 Still, breathtaking view!

Here’s where I’m going to end the first part of Seattle! By the time we get back on street level from Skyview Observatory, we started heading over to visit the Underground Tour which turned out ot be fully booked for the next one, so we headed over to the Seattle Aquarium and came back afterwards for the tour.  I want to dedicate a whole post to Seattle Aquarium because we spent the most time on Day 1 there.  That’s what Part 2 will be all about!

And I’ll wrap things up with Part 3 where its the rest of the landmarks we ended up visiting.  Seattle does have a Day 2 which is half the day before we board the ship so we’re looking at 3-4 more parts for Seattle.  It might take a good bit of time to get all these posts up but bear with me because its also helping me put together a photobook for it 🙂

A quick look at whats to come but I’ll stop the rambling now! 🙂

What do you think of Seattle so far? Have you been before?