The new structure for here onwards will be double features, my lovelies. If you want great full-length movie reviews, I can refer you to a ton of bloggers. At least it will be spoiler-free guaranteed as always. There may be some exceptions but for now, this will be the format for the most part.

This week’s double feature starts with one of the first projects that I backed on Kickstarter that finally made its premiere and as I am not in the UK, I received a 48 hours access to watch it digitally. Next up, we jump into a more action and comic variety of villains turned heroes in a way with Suicide Squad. 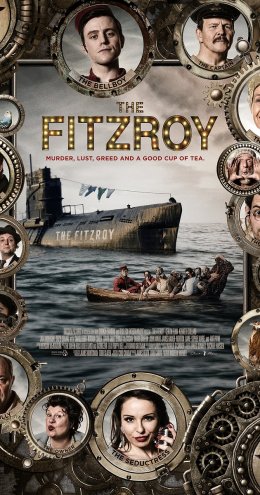 The Fitzroy is a live action black comedy set in an alternative post-apocalyptic 1950s. The world is covered in poisonous gas, and the last place for a traditional seaside holiday is The Fitzroy hotel, an abandoned submarine just off the coast of England. The film centers on Bernard, the hotel’s bellboy, cook, maintenance man and general dogsbody, as he faces a constant battle to keep the decaying hotel airtight and afloat. But when he falls in love with a murderous guest, he is thrown into a mad day of lies, backstabbing and chaos. As Bernard struggles to hide her murders from the other guests and suspicious authorities, his world literally begins to sink around him. – IMDB

One promise that I make is when this comes out officially and I actually receive my copy of it that I’ll write up a full review on this. The Fitzroy arrived on a pretty busy weekend and we managed to squeeze out some time late at night to watch it. The Fitzroy is a compelling movie to watch. Its a tad predictable but the characters are so fleshed out along with a well-written and entertaining script that it has a lot of laughs and fun characters to watch come alive on screen. There is no doubt that The Fitzroy is indie though. There is a lot of charm to the movie along with creativity for the world they have set. Plus, it really is almost all set in one enclosed area with a few exceptions. The danger is also in its environment. The movie is extremely quirky and I mean it in the best way.

Kickstarter projects are always a toss of luck and I don’t remember when this project launched why I backed it and I am sure over the years, my taste on movies have shifted however, I had a great time watching this one.

A secret government agency recruits some of the most dangerous incarcerated super-villains to form a defensive task force. Their first mission: save the world from the apocalypse. – IMDB

Once again, in case you are new here, I need to start with the fact that I have not read any comics so if this is based on any source material of that variety, for myself, this is a standalone. Also do know that I have not caught up with Man of Steel or Batman vs. Superman so while I feel like the mention some of those events, I don’t know if there is a link however, Suicide Squad feels and is standalone for myself.

The best way to describe Suicide Squad is with the word fun. There is a lot of fun. Humor and a ragtag team of villains and fighting and the likes. With the cast they got, its pretty entertaining. However, my husband described it the best the end as he called it very comic-like in the way its made. It isn’t criticism since many movies do a great job using that approach. It is why it keeps it rather light. Suicide Squad also works as an intro to these characters in case we don’t know them: their stories and what motivates them to stay alive. It works because for myself, it didn’t feel like we were invading someone’s story.

Perhaps the best part of Suicide Squad is its cast. Will Smith is fantastic as Deadshot, Margot Robbie was incredibly entertaining as Harley Quinn: other familiar villains like Killer Croc has a role. I love Viola Davis a ton so her role here fit so well with her. I think if I was to rant a little would be the underuse of The Joker because it was played up so much in the publicity about how he did a fantastic job when he was there for like 5 minutes (or what felt like that). At least not enough for me to think that he did a particularly good or bad job. There’s so much here that is much more than that and that has to go to finally not focusing around The Joker which is something that us over at Game Warp have appreciated in some of the Batman games because its gives space for other villains to grow as well.

Suicide Squad still has a rather predictable flow of events however, the script gives these characters a little more than fluff and while it is very comic-like, it is really just an entertaining time.

Have you seen Suicide Squad or heard of The Fitzroy?

How To Get Away with Murder is a show that launched in 2014 Fall season and man, the preview pulled me right in.  Except if you all know me well, I don’t exactly have cable or a PVR and I only use bunny ears (before at my mom’s, now I don’t even have that) and I’m all over the place, so no, I didn’t end up catching the show and then just fell behind. What’s great is that it landed on  Netflix a little while back. I made it my priority (after Veronica Mars) to get that done 🙂 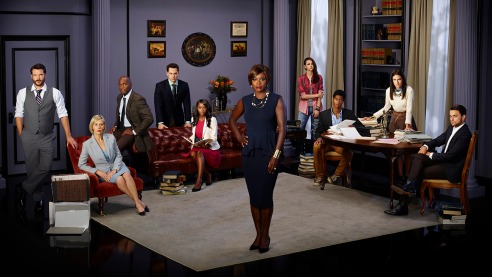 A group of ambitious law students and their brilliant criminal defense professor become involved in a twisted murder plot that promises to change the course of their lives.- IMDB

First of all, in the intial concept of How to Get Away With Murder, its already a pretty successful premise in itself.  We have separate cases in each episode that builds around the main mystery murder that involves what happened to a sorority girl called Lila Stangard and then hiding another related murder that could cause them all a lot of trouble.  As the first season starts wrapping up, we start merging the past with the present and what happens afterwards.  We get a lot of plot reveals and the twists and turns as they work with Annalise Keating and reveals the secrets behind each of them also.

The first few moments as Viola Davis, her character Annalise Keating, walks into the classroom and we scan across the faces of the law students that will be the stars here, the set up is done really well.  Annalise Keating herself is a strong and independent character and an extremely tough lady.  You know right away she’s a strong character. Her course is Criminal Law 100 or something and she calls it: How to Get Away with Murder.

I think there was one moment when I was 10 that I wanted to be a lawyer and that’s because a Hong Kong TV series that went on for multiple parts (also one of the most successful) was just so awesome to watch.  That thought quickly went away when I realized the shy girl like me wasn’t going to break out of my shell and start arguing my way into wins.  I can’t even do it for myself.  So, for me, Annalise Keating may have her unethical moments but the show never fails to help us see that under all that lawyer powerhouse that she carries, she still is very much human when she deals with her husband, her students and her co-workers.  She has her burdens and they shaped her to be who she is now, just like we learn one by one that her students all have their own characters and their own stories that make them who they are.

Talking about her students, the stars that she chose to work for her law firm, we have the book smarts Michaela (Aja Naomi King), street smarts Connor (Jack Falahee), quiet shooting star Laurel (Karla Souza), overcompensating Asher (Matt McGorry) and waitlist Wes (Alfred Enoch). As much of a mixed bag as they are, they play off each other’s characters really well and creates some sort of balance.  We start off with Wes being somehow favored despite his lack of confidence and he turns out to be this guy who is all full of ethics and loyal.  It sounds bad but he kind of got on my nerves because while I can connect a little with his character, he was seriously so easily manipulated or at least it felt that way.  While, I can’t help but really like a very messed up Connor in all this unethical way because you know what, characters that start off bad have a way of developing the most. But then, I also like Laurel because while she is kind of annoying and really unsure of where she stands in everything and sits on the sidelines a lot, she has a mysterious personality that makes me wonder.  Aside from that, Frank (Charlie Weber) who is one of the assistants of Annalise are also incredibly fun to watch.  He has a little ship with Laurel and he is amazing.  I look forward to see how they continue his storyline in Season 2.

We already started talking about familiar faces.  First, we have Matt McGorry in the main cast that was in Orange is the New Black.  Just like one of the prosecutors here are also from there as well. Then we have a few episodes with the wildly talented Marcia Gay Harden, playing as Annalise’s sister in law. Then we have my favorite character on this show, Ophelia played by Cicely Tyson as Annalise’s mother. That lady had some serious character.  That episode in particular revealed a lot about Annalise’s past making it one of the best episodes in Season 1.

I’ve tried to keep this completely spoiler free.  The setup and premise and even the character development were very intriguing.  There are some parts that drag a little but it usually manages to pick right up.  It manages to keep a relatively balanced storyline for us to connect with each of the characters. How to Get Away with Murder is a pretty good show and I look forward to catching up with Season 2 eventually.

Have you seen How to Get Away with  Murder? What do you think about it? Who is your favorite character?