If you recall, a few weeks ago, I posted up the podcast with my co-host David over at That Moment In where we have a random chat about Tremors.  If you missed it, you can find it HERE!

While I don’t watch a whole lot of Kevin Bacon movies, the few that I have seen has proved that he is a great actor with a widespan of skills for many different characters. Tremors was mentioned to me a few times before but the most impactful was during a Q&A session for Cop Car at the Fantasia Film Festival this year after the captivating thriller called Cop Car.  You can check out that review right HERE!

No more link-ups! Let’s head into the review! 🙂 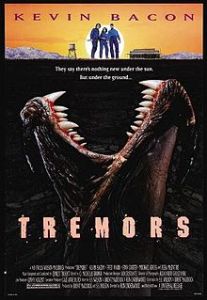 Natives of a small isolated town defend themselves against strange underground creatures which are killing them one by one.-IMDB

Tremors is definitely a treat in the creature feature genre.  In Netflix, its categorized with the cult classics.  Interesting because I guess I can see why it would be there. However, it is one of the more fun creature features despite its age and campiness.  The characters excel at balancing the humor and the fun aspect.  While it takes a little while to get the story going in the fun and adventure area, it does work well in building its story as we follow the main characters, Val (Kevin Bacon) and Earl (Fred Ward) discover the threat that has been hitting obscure areas in town.  As the characters add more, we get some more sophisticated characters that add to the group and turn this into a fight against the creature for survival as they put their heads together and add a little boom here but discover that the creature is actually quite intelligent. 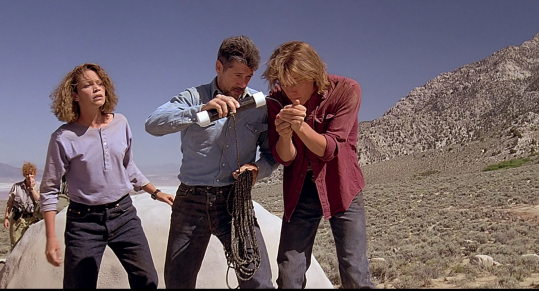 Is Tremors scary? No, that it isn’t.  But then, a lot of creature features aren’t exactly that scary.  They may have been when I was younger, like Deep Blue Sea but this one has some tense moments even though it never holds long enough to make it feel too endangering to the characters. Maybe that isn’t true because with the modern creature features, we always expect someone to die in whatever way and when we can’t determine when and how they will die and just how the creature is, there is a sort of underlying fear.  Definitely the beginning hit that horror territory more than the second half.  As we hit the second part, it really lands into the adventure part as they find creative ways of evading this creature lurking under the ground.  Its entertaining and its hard to not want to cheer the characters on at this point.  My favorite is definitely when they think up the whole pole vaulting escape plan. While it is fun, it is also rather fast paced as they try to outwit and outrun the creatures. 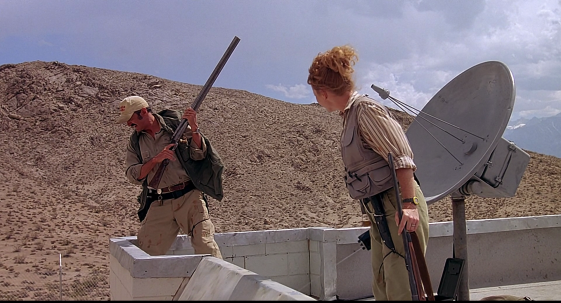 While Tremors is a lot of fun, there are some unnecessary and forced bits.  Its never enough to make me roll my eyes or get frustrated.  In the end, it still delivers a satisfying and enjoyable horror comedy creature feature enveloping all the subgenres I typically like.  Its fun and adventurous, and the characters and their cheesy outdated dialogue. Sometimes its that sort of dialogue that resounds and makes it even more entertaining. Its definitely one I wouldn’t mind rewatching especially if its watching Kevin Bacon’s funny reactions and dialogue and then the gun toting couple and the super campy creature effects.  Like it a whole lot!

Have you seen Tremors? Do you like it? Are a fan of creature features?

I took a day off from posting yesterday to deal with some of my own stuff.  It was good.  I let that overwhelming feeling all come out in the form of tears.  Usually that can be quite therapeutic as well.  Its not resolved but at least a lot of hidden emotional stress has been released and I’m seeing things in a much different light with the help of my wonderful boyfriend.

This really brought up my mood and it still is doing it.

I’m a N’Sync fan.  What can I say? Jason Chen is a pretty good Youtube artist and this was a fun cover 🙂

Last weekend the Labour day weekend and on Sunday we went to my boyfriend’s friend’s place and met a bunch of their friends.  We were supposed to go to the Festi-Biere, a beer festival.  The weather was pretty fantastic but with my boyfriend’s new schedule, we only made it for the barbecue at night.  His friend is a very awesome person and he has a beautiful house in a nice quiet part of the suburbs.  At any new events, being an introvert, I usually do well with alcoholic beverage and he made this one for me:

Afterwards, I learned that he was previously employed as a bartender and so this drink was the real deal, half alcohol and half juice.  Being the lightweight that I am, it had me loose really quick 🙂

By the end of the night, we all sat around the outdoors fireplace and chatted a bit. 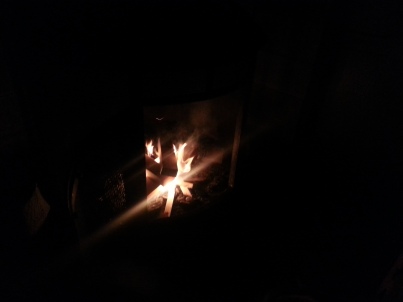 Nice, peaceful, fun and relaxing night with friends is always a great thing.

On Friday, I met up with one of my longest friends. I think its almost 20 years that we’ve known each other. Even though we do hang out once in a while, its amazing to see how we both have changed so much.  I’ve probably posted about the restaurant Les 3 Brasseurs but they make a kick-ass Sangria. 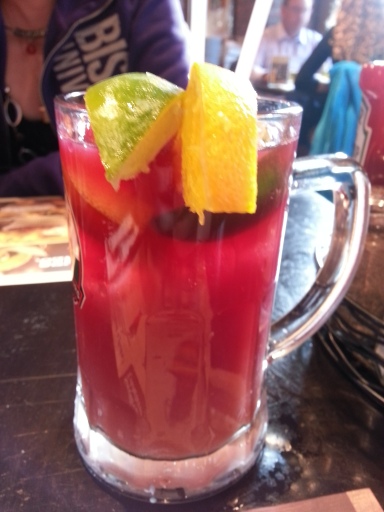 She recently moved in with her fiance, who is a friend because he is also part of my dragonboat team.  I went over to check out the place and it was pretty nice.  While we waited, I had my whole workoutholic mode breakout and had to go down to check out their fantastic gym facilities. 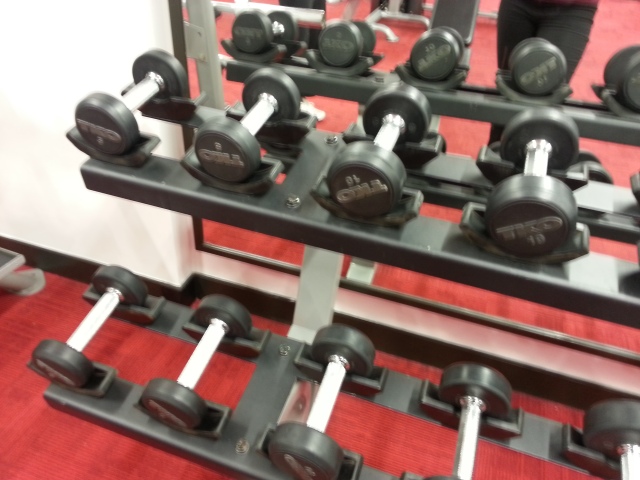 I’m doing these two 30 day challenges over at Tribesports.  I’m amazed that I’ve already passed Day 6 and today is Day 7 which I still need to do later in the day.  I posted about that HERE, maybe you want to join me!

When her fiance finally got home, we ended up sitting down to drink some white wine. Its this sweet White wine called Aufkellerein.  Its pretty awesome.

Yesterday (Saturday) was the quiet time for me.  I sat around and didn’t really feel like I did much except play the very addicting Facebook game Criminal Case, put together the project I’m working on (hopefully I’ll get that done today), and after watching so many movies, I decided to start this series on Thursday night and I’m totally hooked.

I know, I know.  All of you have probably seen it.  I’m still catching up with a whole bunch of stuff.  I really like it though. Did you like Dollhouse? Have you seen it?

The highlight of yesterday had to be the celebration dinner for my boyfriend’s parent’s 40 years of marriage.  Thats a big deal (to me).  They’ve gone through a lot together and it was a pretty happy moment.  They had wanted a dinner at a buffet called Jardin Tiki. 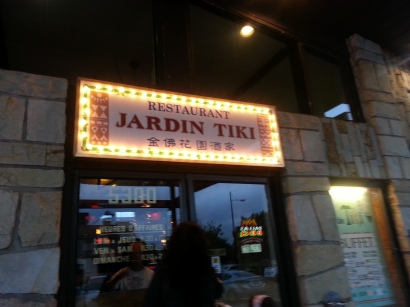 Lets say the front door is underwhelming.  At least they had some pretty nice decor.

A giant dragon hanging from the ceiling!

And they had a pond with fishes and turtles right underneath that.  That was the Chinese part, then we walk in and its all Hawaiian mixed with African.  Showing Canada’s multiculturalism at its best.  Of course, we all ordered drinks and I was good and took a 7-up.  A bunch of people took these cool drinks including my boyfriend, his sister and her son.

My boyfriend, her sister and her son with their Aku Aku Coconut drinks

After the drinks came, we went out to have food.  I’m not much of a buffet person and most of Montreal buffets aren’t really too good.  Plus, I can’t take outside Chinese food so I tried a bit of most of things and it was okay.  A bit salty for some stuff, especially the soy sauce fried rice (at least thats what it looked like). 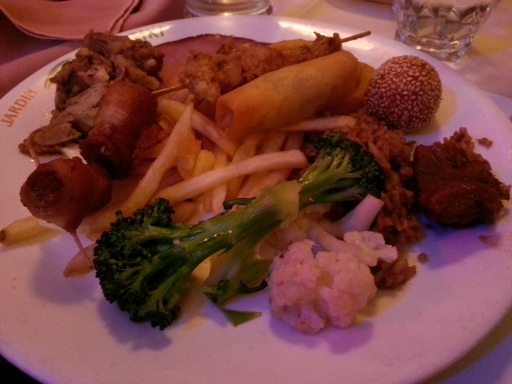 My boyfriend’s dessert plate with Eclairs

We actually had booked for the interior area with a band and dance floor where all the celebrations were so these guys started playing music and the kids kept going out to dance. Then, the singer calls out to the stars of the night at each table and we came to our table and my future in-laws.  They were asked to go out for a dance to Unchained Melody.  So sweet 🙂 Then there was a lot of dancing where my boyfriend’s mom asked him to go dance and then the kids with their adults, parents, and my future mother in laws sisters and their husbands. 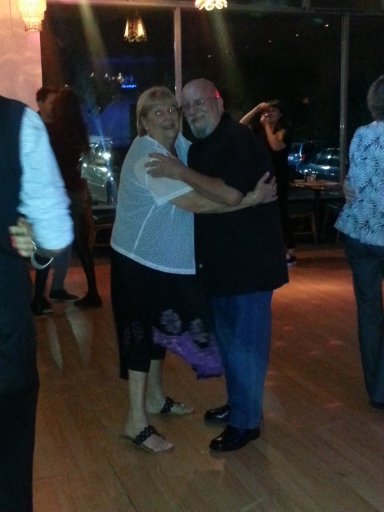 40 years married and still very much in love 🙂

My boyfriend and his mom 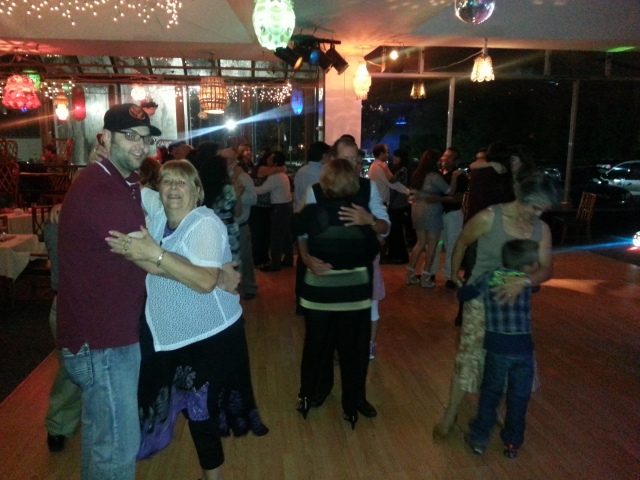 The general dance floor, a lot of from our table

I love these celebrations.  It makes me remember that long love really lasts a long time and I love family events 🙂

To go with that mood, there’s been this really cute (kind of sappy) song that I heard.  Its Chinese so you probably won’t understand the majority of it but the video is a bit dorky funny and I hope you enjoy it 🙂 Its called something like Loving Her Madly. Its by Alex To, Gary Chaw, Victor Wong, A Niu.

Thats a bit of the princess syndrome style. Here’s a good idea of what they mean.