This past week, I’ve been taking a break from reviews.  Before I dive into 3 short reviews, that prove I haven’t been NOT watching movies, I’d like to tell you why.

Aside from the reason of work totally burning me out, its mostly because I’ve been prepping myself for March’s recommendation month.  I’ve gotten the material watched so that I just need to worry about writing the reviews and I have some time to give it more thought.  Its something I’m working on actually.  To not watching everything last minute and then play catch up with my posts.  I’m hoping it’ll work out, but I don’t know…

Anyways, enough of that! I’m excited about recommendations month but first things first, I need to exercise those reviewing muscles.  I watched 2 of those this past week and the other one, maybe two weeks ago.  The reason I do these, its really because I’ve piled up too many movies or there’s just not enough to review in a single post. 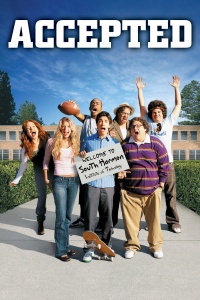 Bartleby (Justin Long) and a few friends didn’t end up getting accepted into any colleges but to please their parents, they come out with a fake school and stage the whole going to college event. That is until, the word goes out and actual acceptances were done through a fluke on their website.  Bartleby ends up running the college while creating something a lot more than he expected.

Accepted is a pretty stupid comedy and it revolves around a lot of dumb(ish) humor.  A lot of times (actually, more often than not), it doesn’t work for me.  It just doesn’t so I usually run the other way.  Somehow, I remember hearing before that this wasn’t bad so one late night, while I was feeling sick and couldn’t sleep, I turned it on to make me feel better. Its a comedy so its supposed to do that.  To be honest, I can’t pinpoint the reasons, but I ended up enjoying it.  I acknowledged the stupid parts but for the most part, I liked it.  Plus, I really like Justin Long doing that nerdy/geeky sarcastic humor thing and I have no idea why…

I do realize that aside from Blake Lively in Gossip Girl and Sisterhood of the Travelling Pants (which I should review), she’s never been very enjoyable in movies.  Its not that she’s bad but nothing quite beats her performances especially in Gossip Girl.  Either way, average humor and its a good one to sit around, leave your brain at the door and laugh a little.

Do you like Blake Lively? How about Justin Long? Any roles you particularly enjoyed of either of them?

Andrew (Dane DeHaan), Matt (Alex Russell) and Steve (Michael B. Jordan) discover a hole in the middle of the woods in the outskirts and go inside to find that they have absorbed some sort of energy that allows them to have all sorts of superpowers from telekinesis to even flying.  As their power develops, they are now torn as to how to use the powers in a rightful way and not be  lead into the darker side of things.

I’m not an expert at found footage. In fact, the only found footage I’ve seen was for last year’s Halloween fest opener, Area 407 (review HERE).  Oh yeah, I hated it! Its one of the reasons I’ve been hesitant to watch Chronicle but since it was going to expire (or has as this goes up), I figured I would.  To my surprise, Chronicle turned out to be pretty good.  I’m not saying I loved it but I liked it.  They used the found footage camerawork really well and even incorporated it with not only their camera but also whoever has filming devices like someone else’s camera (using a second point of view) and phones, etc.  I seriously think for found footage, that aspect is very important.

Plus, they used decent young actors. They portrayed their roles very well.  It helped that the script was done pretty good also.  It had a very intense parts, especially once their bond grows and then starts to fade near the end with disagreeing with how their powers should be dealt with.  Plus, the ending was pretty fulfilling 🙂

Do you like found footage films? Which ones are your favorites?

Halley (Mandy Moore)has seen so many love disasters that she doesn’t believe in true love.  When her sister and then her father both announce to get married and her best friend falls madly in love, she tries to stay supportive.  However, as she starts to know Macon (Trent Ford), the best friend of her best friend’s boyfriend, she starts to like him a lot but also tries to control her feelings.  Except, is it so easy?

Ever since I rewatched A Walk to Remember for the Valentine’s Marathon HERE, I’ve been trying to find more Mandy Moore flicks.  How To Deal is a romantic comedy and although I don’t think its a really great one, its good enough to deal with.  Let me make it clear though, I liked it because of the characters in the story. I always feel that Mandy Moore is a very crush-worthy girl because she gives off this simple vibe.  Plus, Trent Ford reminds me of the more recent Tyler Blackburn from Pretty Little Liars. He has this dark, mysterious but sexy-ish appearance. Plus, they have strong supporting role from Allison Janney.

Of course, the dialogue and story itself isn’t all that great, even though it is supposedly an adaptation of two novels that I’ve never heard of. There’s something missing and the main character is really not good.  I didn’t connect with that one as well but having Mandy Moore there makes this rom-com a lot more tolerable 🙂

OVERALL…the three movies I watched were pretty much average.  I never recommend comedy as its so personal to your tastes.  Even me, I’m not quite sure if its because I was feeling sick when I saw it.  I would recommend Chronicle though.  It was definitely the best out of the three here.  It was also a surprise.  How to Deal isn’t a great romantice comedy but it does have a decent cast who helps it to be better.

Have you seen any of these? What did you think?