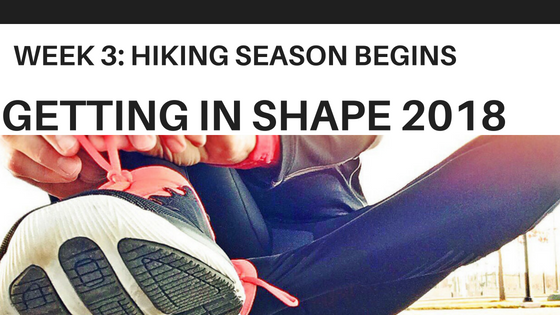 Week 3 is among us! So far so good, I would have to say that! This week is going to be trying to find some more of the groove. I’d have to say that the first month of establishing the workout routine is probably the most tiring and a lot of juggling around with other commitments. Once the schedule and routine solidifies, its a lot easier to work with it. Of course, that is to say that, I do diverge away from the TIU Bikini Series routine every once in a while for things that I’m working on that day. For myself, I think its fine. If I can, I’ll do the whole thing, if not, at least I’m using it as the body weights and weight training portion since that is the portion I struggle to figure out a routine most of the time.

With my husband’s schedule going back to normal, we are determined to go hiking much more frequently then previous years. Our first hike, after much debate, was to Mont Megantic. Its a pretty cool spot. We ended up doing the intermediate trail Le Mont-Megantic but I’d say we did about 10 kms total as we didn’t go up the final slope to the observatory but rather only the first viewpoint. It was a pretty tough trail to start the season though. However, the view is gorgeous and it would be a lovely experience to go during its observatory festival about space and such. The trail is lined with streams on both sides and the path is quite rugged. We actually still had snow for parts of the trail. Anyways, I’ll have a post for it going up.

This was supposed to be 3 rounds of 15 reps however the hike yesterday was pretty tough so I cut one round.

Total Body
2 rounds of 15 reps (supposed to be 3 rounds; cut the last round as my knees were having some weird pain)

15 mins walk today in the form of an after work errand that I had to run.
Had a few other errands to run so ended up running out time to do a workout. Planning to combine it with Friday’s 5 moves to do a super-sized workout.

With heading out of town to Ottawa and having to come back to do some bits of catch-up on my to-do list, I didn’t end up getting a workout done.

This week has been a tough one! The hiking on Monday wiped me out quite a bit and the recuperation took some time. I ended up not actually doing the 3 rounds of 15 reps at all. I didn’t end up running either. It was slightly disappointing but through all the fatigue from the hike, I still pushed myself to do at least 2/3 of the workout as much as I could, and if I didn’t, I did a lot of extra walking for whatever errands and such. Its not great but it was going to happen. Next week, I’ll be back on track, I promise!

That’s it for this week’s workout recap!