Third before last double feature in this Valentine’s romance double feature theme. I’m starting to think about when to do another themed alphabet month because it was just so much fun. Not sure what to do or what theme would be interesting enough. Maybe an international film theme, which would open up more genres. Any suggestions.

Moving onto the T & U selections. Talk about international films: I ended up choosing a Zhou Dongyu double feature and a Chinese film double feature and coincidentally, because its such a rarity in my movie watching life: a double 5 star rated films as well. All around an awesome time which had one feature that gave me a ton of laughs and fun and the second that gave me all kinds of emotions and some tears. If nothing else, these two films show that China is an upcoming force to put on our radars, especially with Netflix acquiring some as Originals.

Let’s check these out! 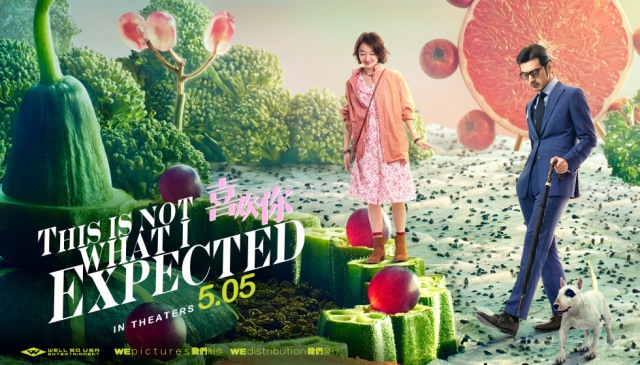 An obsessive CEO of a company meets a ragged chef by chance. They are drawn closer together because of their love for delicacies, yet their personalities clash big time. – IMDB

Romantic comedies are a dime a dozen. Honestly, the Hong Kong (can’t say for China because I haven’t seen enough films to comment on it) landscape doesn’t really have any ground-breaking films in this regard. No one sits down to enjoy a great romantic comedy because its just generic. This Is Not What I Expected might not be anything ground-breaking in its formula because the course of events are quite predictable and generic, what it does do is for the first time (to my knowledge) dive into a screwball comedy style. Its quirky and hilarious. There are contrived events and things that get way out of proportion where its impossible to imagine any of it actually be accepted normally, but then there is a point in film that we find a line between reality and challenging its limits and something about the charm of This Is Not What I Expected hits it perfectly. Its been a long time since I’ve enjoyed a film and felt so fulfilled and happy about it all the way through. Not to mention, the movie also is right up my alley as it has a lot of artistic shots of food and cooking.

The main reason is its main leads. For one, Takeshi Kaneshiro is a fantastic actor and he has been in many films. However, it may be the first time he’s done a role that feels so serious but at the same time, so hilarious because of his expressions. It definitely isn’t a frequent type of role for him and this feels so refreshing to watch. At the same time, she is opposite the younger Dongyu Zhou who is a rather popular Chinese actress and truly excels in this type of role. She has this out of control nature and yet there is something so genuine about even the most absurd things that she does and yet it makes her quite adorable as well.

Us and Them is a Netflix Original and it tells a wonderful love story. Its quite reminiscent both in color palette and plot of a story like Blue Jay and One Day (the book, not sure how the movie is structured), except this story has much more context as we see a colorful past of Xiao Xiao (Dongyu Zhou) and Jian Qing (Boran Jing) from how they met to how they got together and the conflict that drove them apart. Ten years later, as they meet again and each in their different phase in life, how they have changed and how they face each other. Perhaps the story itself isn’t very unique but its honestly in the details as we see why their present is in black and white and their past in color. Especially with the background music as well as the artistic shots and structure of some of the scenes. Its hard to imagine that this is a directorial debut of Rene Liu who is an accomplished singer and actress but the first time taking the helm of the director.

However, true credit goes to how the characters are developed in each phase of their life. There is a deep knowledge of them as they change and grow over the years. It is a genuine relationship and progression that makes them so real. At the same time, the story isn’t just about their romance but also pulls in masterfully a second plot line related to family. The movie extends itself the entire way through the end credits as they pull in some real people who write messages to their past loves and then an ending scene which talks a lot about the message behind this movie being in telling those you love them (whether lover or family) before you lose the chance to and letting the regrets hang in the air. Just like the tagline of this movie which translates to: “After, we had everything except each other.” Its both a heartwarming film for a part of it and yet such a heartbreaking film that ends up being bittersweet as well. Just like Xiao Xiao and Jian Qing reflect on themselves and their relationship, the movie will end and made me reflect on a few things as well. Us and Them is a beautiful movie both in cinematography, soundtrack, character building and story. Its full of style and so very unique because its been pieced together so well.

This double feature is the absolute highlight of not only this marathon but probably the past while of films I’ve seen.
Have you seen This Is Not What I Expected or Us and Them? Thoughts?