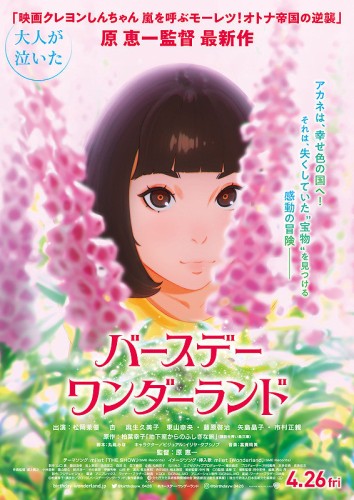 The Wonderland, originally titled Birthday Wonderland, is a 2019 Japanese animated film about a girl who goes to pick up her birthday gift at her aunt’s store and ends up unlocking the portal to the world beyond and is tasked with being the savior of this mirror world.

Right from its beginning, The Wonderful is all about its vibrant and colorful background and its relaxing everyday. Akane’s biggest problem was being accepted at school by her classmates doing the most mundane things like wearing a hairpin. For her, this made her life difficult and everyone else’s hard. Its a good way to start the movie especially as this foundation takes us into the mirror world called World Beyond and she has now been adorned with a Momentum Anchor that makes her move forward even when she doesn’t want to and seen as the Goddess of the Green Wind, the person rumored decades ago that will save them from a major crisis by curing the Prince.

Japanese animation has always seem to flourish when it takes the environmental elements into their stories. For a film that focuses on the world beyond losing color as their main danger due to the lack of water, it still manages to keep it colorful and cute. To emphasize it, there are contrasts of dangerous enemies with dull metallic armor and black clothing with the bright colors used for everything surrounding the group heading towards the castle. While others have buffalo stampedes, The Wonderland has stampedes of huge fluffy sheep and then a scene of Akane and her aunt Chii, who joins into the journey, lying on them (a parallel of My Neighbor Totoro perhaps), and the journey continues into different environments that they go through filled with shades of red, pink, orange and many other colorful elements. There are so many details here and the little magical elements also add into the charm of the visuals especially in the landscape.

The characters also are quite charming, if not still pretty familiar in design. Akane and her aunt Chii create a contrast as well. While Akane needs the Momentum Anchor to move her forward to be more courageous facing different situations, Chii is more about embracing the adventure and being prepared and taking chances. Its this contrast that makes it funny and rather inspiring to watch as over the almost 2 hour film, Akane finds her strength and also embraces her ability to try and save the world because of seeing the beauty between this mirror world that had kept a more old-fashioned way of living in comparison to her reality of modern advanced technology. These two may bring a lot of joy to the film. In fact, the movie definitely falls into the cute elements more especially as the sidekicks are little humans who are a little silly but also very adorable.

Filled with talking cats, underwater aquariums and colorful environments all around, The Wonderland is exactly as its title implies. Even with the crisis that the world faces, it still manages to keep it light-hearted. The visuals and a sweeping soundtrack that sometimes matches to the sounds in the scene and other times, creating the environment for the scene adds a lot to a fairly generic story. Running at 115 minutes, it does feel like it drags a little in the middle part despite all the charming locations giving it a boost. The story could have been better executed as a whole but its cute and colorful and its hard to be a little enamored by it.