Day 2 of Montreal Comiccon 2019 is behind us now. Saturday is always the big day of the event. Not only is it the day with the most visitors at the event and its an obvious change from the first day, but its also the day where most of the guest of honors and a lot of Q&A panels take place. With a line-up of Lana Parilla, The 100, The Umbrella Academy, Lindsay Seidel, Georges St-Pierre, Elijah Wood, Tom Felton, Ray Park, and Michael Madsen appearing in Q&A panels throughout the day, it is going to be a huge run around to try to catch a portion of these.

The 100 panel featured three main characters from the series, Bob Morley who plays Bellamy, Eliza Taylor who plays Clarke and Tasya Teles who plays Echo. After a surprise wedding announcement for Bob Morley and Eliza Taylor earlier this year, possibly fulfilling the ship between their characters on the show, the three are relaxed and fun at the panel as the fans praise the show on its gender equality and LGBT relationships and how the characters are defined by their talents and not these more personal attributes of race, gender, etc. Bob Morley and Eliza Taylor talk about the difference between filming in Australia versus USA. A lot of what are their favorite scenes and favorite things were asked. Due to the pure Q&A session format and no general questions with the moderator, the questions were very fan-based. However, if the excitement in the room was reflective for everywhere else, The 100 still has maintained a lot of its hype (which is great because I also love it a ton). 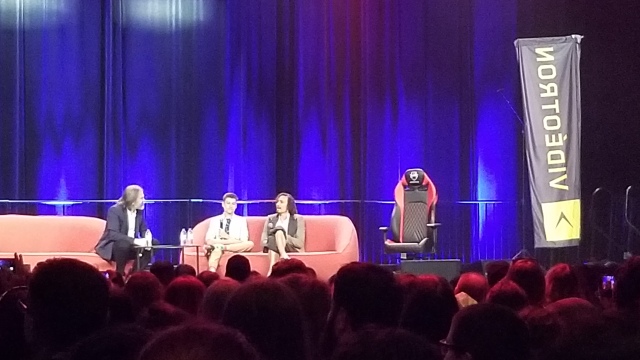 The Umbrella Academy is one of the newer shows to have a panel at this year’s Comiccon. Bringing in Cameron Brodeur who plays young Luther and Robert Sheehan who plays the conflicted yet flamboyant Klaus, the panel was vibrant to say the least. Cameron Brodeur steps up on his first panel which is very exciting as he shares his love for Spider-Man and superheroes in general. As young Luther had relatively less roles, Robert Sheehan had a lot more questions about his roles from his favorite aspects of the character to the show. They were asked about working with Mary J. Blige as well as the weird and embarassing filming moments. With The Umbrella Academy having a second season greenlit, it probably will be just the beginning of panels for this Netflix Original series.

At this point, Elijah Wood has surpassed his Lord of the Rings trilogy days especially as that is 20 years old already since its start. He has gone on to be involved in TV and indie horror as well as video games. On his IMDB page, he has over a hundred credits over his 30 years of being involved in the entertainment business. The normal questions of favorites and inspiration came up however, what stood out the most the genuine reactions to all the questions as well as his gratitude for still thriving in the business after so many years. He addresses also his project choices which rely on his gut and finding roles that vary from the previous ones as well. A fun panel to say the least even if the majority of the questions still remain very Lord of the Rings oriented or more on his younger projects and (not so) surprisingly not about his newer projects especially in indie films. Talking about newer projects, he has a film premiering at Fantasia called Come to Daddy.

Its been a panel heavy day running non-stop between line-ups and wait times from late morning to middle of the afternoon. However, the star studded panels definitely were a lot of fun and gave us a look at some of the different experiences of these TV and movie icons that has gained quite a bit of popularity and love.

Thats it for Day 2 recap!

Other parts for gaming wrap-up and cosplay will be over on the Game Warp Blog shortly, if that interests you.

Also, audio of these panels, once I find time to listen back and see what is usable or not will be posted later on my channel. I will be sure to share it one place or another, when it happens.