We’re at the next letter! The alphabet is almost done and it should be finished right before the end of the year, just in time for some Christmas festivities. Now, its all about getting this thing along nice and smoothly.  I wanted to swap this one out.  Something about a drama didn’t quite amuse me but after looking and wanting to change over and over again.  I ended up just watching this.  It’s Kate Winslet. I’m guaranteed a good performance at the very least. I have no idea what this is about. I can hear you all going, “What, Kim? Have you been living under a rock? Kate Winslet won best actress in this?” My excuse, I’m sorry.  I started blogging about movies in 2012, unfortunately, in 2008, my life was all about international business and accounting.  I was in university… Anyways, I’m working on all of it now. I know I’m missing out on a lot of stuff but I’m trying my best. 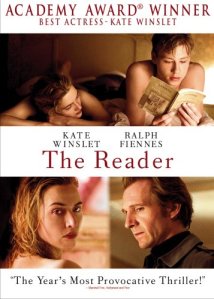 Post-WWII Germany: Nearly a decade after his affair with an older woman came to a mysterious end, law student Michael Berg re-encounters his former lover as she defends herself in a war-crime trial.-IMDB

The Reader is one of those movies that I tend to veer away from.  My enjoyment of movies involving and touching upon anything to do with wars aren’t a lot.  It usually makes it too dramatic and I can’t take it.  My emotions just go out of whack and it hits me super hard and then I get really depressed and don’t want to do anything for a little while.  Well, its one of the reasons I watch these movies sporadically and very spread out. The Reader has been on my to-see list forever, mostly because I have a huge girl crush on Kate Winslet and I think Ralph Fiennes is a fine actor so this movie was a winner before it even started. Plus, hey, look at that, Kate won best actress. I didn’t know that before I looked at this poster. Great blogger I am, right? 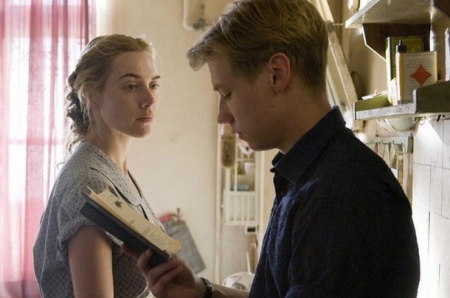 The Reader is great.  It was not your traditional sort of romance and it was a good part about a young Michael Berg’s growth into who he is and why he has grown up to be that way.  Kate Winslet plays an older lady that helps him and they fall in love into this awkward affair that they need to keep a secret because its not exactly right for a 16 year old to be having some relationship with an older lady (who I assume is in her 30s?). They say the dates and write the years and yet, my dumb memory can’t register it all fast enough so I can’t remember.  As wrong as the relationship may seen, we see a lot of the signs of who Kate Winslet’s Hannah is before a very naive and innocent Michael Berg (played by David Kross) does and when they part their relationship and meet up again when he is a law student, when it clicks for him, it makes us wonder how it makes him feel. The thing is, what makes The Reader really great and just so attractive to me is that it brings in an influx of emotions.  In the beginning, it all feels wrong for Hannah and Michael but it also feels so right and genuine.

Talking about the relationship, Kate Winslet does a fantastic job. I don’t know who the other candidates were for that year in the Academy awards but this has got be one of her best roles yet.  She turned Hannah Schmidtz into a woman that we can’t exactly read through her words.  Hannah observed and reacted sometimes to Michael’s actions.  She was troubled and conflicted but also, found ways to make herself work out why she did certain things that felt wrong to everyone around her. The question is whether Hannah is a selfish person? I really don’t think so.  She just had issues that lead her to final outcome.  What makes Hannah come to life is that she didn’t have to say a lot but we could read what she actually meant in her eyes.  Now that, my friends, is some impressive acting. I always think that if you can emote without words and communicate those feelings perfectly, you got some skills.  Kate Winslet does that amazingly here.

However, we can’t discount any of the other characters.  A strong plot helps The Reader also. It took time to build the relationship between Hannah and Michael and allowed us to really see deeper into what it meant to both of them.  It shaped who they are as well. David Kross is a very talented young actor who carried the young Michael Berg well.  He goes from the shy and innocent boy and slowly becomes a boy that falls in love deeply and is absolutely genuine. He does get older so he starts feeling like things are unfair between them before Hannah lets the relationship go while using the opportunity to pursue something new which leads her to the trial 10 years later.  Even as Michael gets older and hasn’t seen Hannah, David Kross carries the character to make us believe the influence that Hannah has had on him.  Its a story about right and wrong, no matter its their relationship or being a guard at Auschwitz and the decision they made while there.  Its a strong film that evokes a ton of relationships just between the both of them. 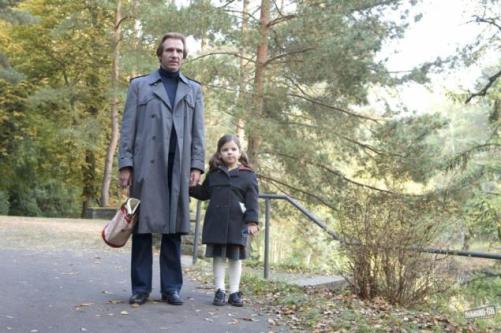 As we fall on Ralph Fiennes who is the older Michael Berg, we can still see the effect Hannah has had on him.  He doesn’t ever talk about and never embraces it but we know its what makes him hold back a little.  The older Michael Berg has a much smaller part in the entirety of the movie but with the little part, we get a glimpse of Michael Berg’s growth as a man.

This review is already hitting dangerously close to spoiler territory.  Overall, I really liked The Reader.  I gauge movies especially drama at how much it evokes feelings from me and I seriously felt the heartbreak moments to hurt when they happened and when they were all happy and stuff, it also made me feel good.  Its covers a few meaningful themes, a little bit of the alternate love story, a bit of the coming of age thing and hits in the ethics and morals part of things.  Its hard for me to like a historical drama and this one worked for me particularly for the strong performances from both Kate Winslet and the young David Kross. Its definitely worth a watch.

Have you seen The Reader? Do you like to watch historical drama?