Next up on the Netflix A-Z segment is the letter Q. As mentioned in the previous round, there are such limited movies available on Netflix. A few more rounds and I will have to start digging into my own movie collection. But, we haven’t reached that point, our Q selection is The Quiet, a film I know nothing about and haven’t heard about before maybe a month ago (or whenever it hit Netflix). 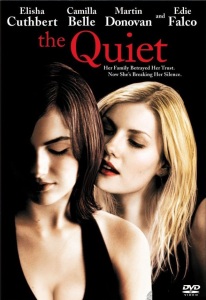 Dot (Belle), a young deaf and mute woman, is sent to live with her godparents (Falco and Donovan) and their daughter (Cuthbert). The new addition to the household realizes that everything is not copacetic in the home, and the family’s dark come to light.-IMDB

Before we get to the actual review, let us talk about the poster. Doesn’t it give a similar feeling of Cruel Intentions? At least even though nothing before and reading a description that didn’t make any sense to me, that was what I thought I would be watching… but its not. Nothing like that. Its not a bad movie but there are a lot of edgy topics (which is fine) and just a ton of stuff that seemed to make no sense. I get the flow of the movie but maybe this time around it was a lack of acting or emoting making the little nuances just feel like the hints were more like the director whacking over heads what is coming up while trying to be mysterious and still keep it a big twist.

The Quiet is set up in a weird way. Most of the tone is set up well enough. Even the dialogue isn’t all that bad. Some of it is clunky especially when the characters all start spilling their secrets to Dot, the deaf goddaughter that gets taken into this family. The language gets vulgar and actually a little disturbing but its all in context of the movie. I can imagine doing that under the circumstances especially if you take it that everyone hides something they don’t want to share because they can’t imagine what others will perceive them afterwards or if they even have embraced whether they like or hate that part of themselves. Dot is like the hole in the tree that you scream or release all your inner thoughts. I would probably still feel better talking to a tree though but thats probably just me. Those moments however are the best moments in The Quiet especially Elisha Cuthbert’s part. 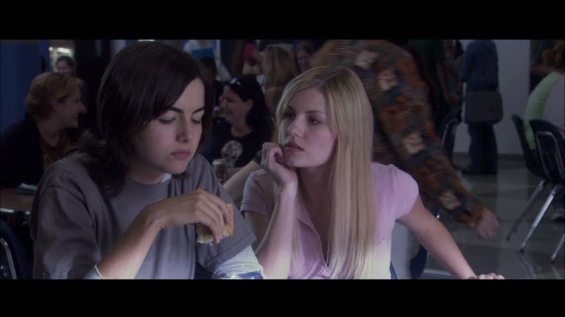 Talking about the cast, Elisha Cuthbert is possibly the best part of this, not to mention this might be the first movie I’ve seen of hers. I have always wanted to because she is from Montreal and an alumni from my high school.  Neat piece of trivia, right? Regardless, she is pretty good at this role.  It was effective.  Her character was more complex.  On the other hand, Camilla Belle also did a decent job for the most part.  I do think that there were flaws in the fact that she slightly overacted certain parts that helped reveal the secret but that could also be like an editing or lack of detail issue in the production.  I don’t know what the mindset was behind some scenes that made it painfully obvious of what it was all about.  I really can’t fault the cast here much but Martin Donovan playing the father was a little over sometimes also.  He also made a “twist” feel somewhat obvious especially in certain interactions. But the one I want to talk about is Shawn Ashmore who plays a supporting role as a guy that likes Dot.  On one hand, he fit that character pretty well in the disturbing, secret revealing moments but in other parts, he also was super stupid, just how the character was done. But, no character was quite as annoying as Katy Mixon’s as Elisha Cuthbert’s character’s best friend.  Its hard to elaborate anymore without spoiling it in case any of you want to watch The Quiet at any point.

Overall, there’s not a whole lot to say about The Quiet.  Its an average movie.  As a thriller, it fails at a most levels because it tries too hard to be mysterious and in turn makes a lot of the plot surprises become really obvious.  On the other hand, the cast does well with what they have.  Elisha Cuthbert stands out to me the most but Martin Donovan and Camille Belle and Shawn Ashmore also are rather good, better in some parts than others but still it all works together.  The Quiet is weird and it touches on some iffy and disturbing themes.  In the end, its about the dark and disturbing secrets that people hide under their pretty appearances. This one pretty much falls apart somewhere in the middle but then they do try hard to recuperate.  Its an okay movie to catch on a rainy afternoon when you have nothing else to do.

Have you seen The Quiet? What did you think about it?