Starting the festival with a two movie night might not have been the best choice as I think about it afterwards. But, Kung Fu Killer delivered overall.  If you missed the review, you can find it HERE!  The Hallow was something of a wild card for me.  My line up went back and forth from adding and taking it off until I finally looked at the trailer a second time and decided that it was something I really wanted to see.

Before the movie started, as the movie resumes for various other features and this one popped up, it said that The Hallow might be the best creature feature from the UK since The Descent.  An extremely bold statement and one that raised my expectations.  Not sure that is a good thing before seeing a movie but it did. If it even lives up to 50% of the intensity that The Descent brought, this was going to be a good one.

Regardless, here we go! Before the movie (as with some features in Fantasia) there was a short called The Morrigan. 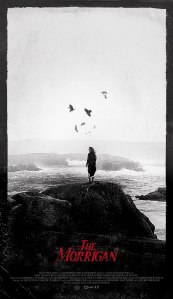 A couple heads to their cottage house for a getaway and in the middle of the night discovers and shelters a mysterious girl fainted next to their house but little did they know, she also brought with her an evil force.  Great atmosphere and set up.  The acting was a little iffy here and there.  The location was really suitable.  It was enjoyable short.

Moving onto the main feature

A young family moves into a remote millhouse in Ireland.  Husband and father, Adam is conservationist and his job makes him go into the woods surrounding his new place.  The inhabitants there warn him to stay out as he continuously ignores it and their belief that there are mysterious forces lurking in there that should not be disturbed. Except, his actions lead one thing to another and these beings known by everyone as through lores is The Hallow.  These nocturnal creatures will do anything to take their baby from them.

The Hallow is an interesting concept. It brings not only creatures but also some fantasy and mythology into it.  Is the Hallow an actual thing? I’m not really sure.  I tried to do research but it didn’t seem to come up with anything.  Maybe there’s something similar? I don’t know but its all about selling the premise and The Hallow does a fine job of it, for the most part at least. The movie itself doesn’t have an overly lengthy running time and that does it wonders because once we get an idea of the characters here: Adam, his wife Clare and their little baby Finn, we also start knowing that the town itself is really antsy over what lies in the woods.  Right away, we already know something different and deadly will happen from the start.

While there are some flaws, which I will touch on near the end, The Hallow is a well-paced fantasy creature feature.  First of all, the location and set is mesmerizingly beautiful.  Funny, because it contrasts all the “evil” that lurks out of it.  But then, are creatures ever evil? Are they just acting on their instinct, right? I guess evil isn’t the right word here. It really brings out that idea that how we view something changes and takes a 180 flip with just one little change in variable. Something beautiful became creepy just by the unknown.  The build-up and the atmosphere was also extremely well done, especially when paired up with the sounds and background music going on.  Honestly, it all blended so well together that I didn’t even notice it. Plus, the premise here is really good. I’m always a fan of how when you mess with nature it comes back to bite you in the ass.  Thats generally what I felt was the idea of the story here of the natural world versus the human world when humans try to poke their noses where it doesn’t belong. In this case, we result in The Hallow who trespasses your home when you trespass theirs. 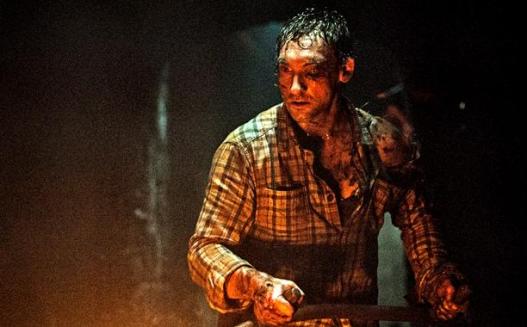 As I review horror movies more, I’m starting to realize certain aspects that I used to overlook.  Lets just admit this: You and I both know that I’ll get scared.  I get scared at everything.  That’s just me, I’m a chicken when it comes to these things.  So, I no longer determine whether I was scared.  Because if thats the case, every horror movie would be a winner.  Except, its how scared? How far will I suspend my beliefs or just purely believe in whatever is on the big screen.  How intense the atmosphere gets that I cringe in fear even when I know what to expect.

The Hallow was an unknown creature that builds up to its final reveal.  Let me try to explain this better, The Hallow (like many horror movies) can be split into 3 parts.  The first builds our characters and the scenario and the atmosphere.  The second part was intense as the unknown Hallow gave chase.  We saw parts of it here and there and just how gruesome and invasive and dangerous this creature is.  As we step into the final scenes and that twist that we knew would happen, things start to fall apart.  The Hallow isn’t quite as scary once the story takes a weird turn into multiple directions and we finally get a full glimpse of these beings.  Was it trying to be dramatic or was there something more it wanted to say? I really don’t know.  I just know that the ending didn’t exactly do it for me.  Be it that it was the creatures once revealed didn’t have the effect to creep me out or that the characters just went down this questionable path that I didn’t quite understand, it just felt like it fell apart for something that started and even built to so much potential.

Before you start thinking that I’m discrediting the movie, I’m not.  I had a lot of fun with this one.  The potential was there and a good 75% of the movie was great.  Sure, there was some questionable life choices the characters made that made me really frustrated and snicker sarcastic comments under my breath and the ending really didn’t do much for me but there’s something here.  Its not The Descent (as the description of it on the screen before the movie stated) and no, The Descent creatures will not be scared of these creatures because you can’t compare apples to oranges.  Its a different atmosphere and environment entirely from closed space to open space just to state that.  So I’m not doing that comparison.  The Hallow works for the most part and you will cringe and not even know that intensity has built up incredibly high.  I mean, I didn’t realize I was gripping my blazer tightly until the scene had a down moment to let us breathe. The atmosphere, the setting and even the shots are framed really well.  The pacing is fine. The script just needed to have a better end goal, somewhere that would work better (for me at least).  The scares are there and even if they are predictable I totally fell for it each time and even had a few startled moments. The Hallow isn’t perfect but not many horror movies are. There’s something worth seeing here and maybe you’ll appreciate the ending more than I did.  Its definitely worth your time. 🙂

Have you seen The Hallow? What did you think of it? Anyone know anything about Irish lore/legends and is The Hallow derived from an actual belief?