Moving right along, up for a few Academy Awards nominations, including Best Picture and Best Actor in a Leading Role along with adapted screenplay and production design and more is The Martian.  I had meant to see this in theatres but I believe it landed in a time when I didn’t find much time to go anywhere or do anything other than the normal routine.  Regardless, I came home from a weekend getaway with a friend and decided to start this one up!

During a manned mission to Mars, Astronaut Mark Watney is presumed dead after a fierce storm and left behind by his crew. But Watney has survived and finds himself stranded and alone on the hostile planet. With only meager supplies, he must draw upon his ingenuity, wit and spirit to subsist and find a way to signal to Earth that he is alive.-IMDB

The Martian is a smart and thrilling action adventure.  Its adapted from a novel by Andy Weir with the same novel. I’m going to be honest that I’m not a huge fan of Matt Damon.  In fact, I don’t think I’ve seen many of his movies and the ones I’ve seen are somewhat forgettable.  The premise of The Martian looked good and one that could amount to some fun and intense moments.  All these expectations were met and exceeded.  Its rare for me to stay engaged in lengthy movies and coming in at 2 hours, I’d say it borders along the length I’m not a huge fan of although most movies are averaging around that sort of runtime nowadays.  However, it never feels like its that long.  Even if he stays on that planet for something like 3 years or whatnot. This has to do mainly with pacing and the tone along with some good performances.

I can’t compare it to the source material but nothing in The Martian ever felt like it was lost in translation.  The story pieced together well.  For one, The Martian is kind of like Cast Away but in space except it shows the other side of the spectrum working hard to bring him home, almost as hard as he is working to stay alive.  Its because of that, our endearing characters go from Matt Damon’s witty attitude towards this as he slowly transforms over the time in Mars by himself to the scientists at NASA working to get him back as soon as possible and to his crew that reluctantly had to leave him behind in the first place.  While this can be dramatic, it also is strewn with comedic moments to mellow out the seriousness of the situation.  In many ways, its the heart of having a positive heart that keeps you going in the first place or just its better to try to work stuff out then to give up. On top of that, the production design was great along with the visual effects.

The cast here is pretty fantastic.  I’m loving that Jeff Daniels is in this one also.  Back to back movies with him is refreshing (the last one was Steve Jobs that I reviewed HERE).  Its also with a very different and much more serious performance from Kristin Wiig which I liked quite a bit.  At the same time, Chiwetel Ejiofor is a fantastic judge of picking decent movies to be involved with and his role in this one is dynamic to say the least.  Jessica Chastain might not feel like she’s in here for a long time and honestly, I didn’t even think her role was that groundbreaking, especially considering the crew also included Sebastian Stan who should get more bigger roles. A young actor Rich Purnell gets the small role of being the astrophysicist who kind of solves all the problems here and I’d truly love to see him in more movies because I loved his part.  But, Matt Damon blew me away.   It was a memorable performance full of energy.  Smart and funny; the latter adjective is something I never quite associated him with before.  Mark Watney is a great character and he did a great job bringing him to life on the big screen. 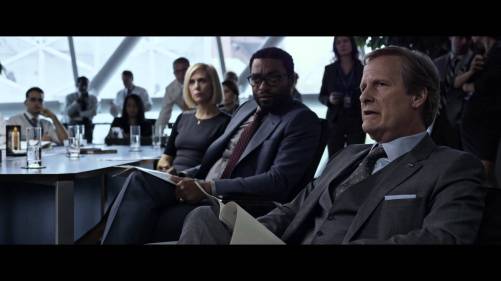 Overall, The Martian is a fun action-adventure movie.  It carries a good message, adds in some thrills, puts a little space twist, and is smart and comedic all wrapped up in a little bundle.  It works well and is an engaging story.  The cast and their performances were great from Matt Damon to Kristin Wiig to Jeff Daniels and much more.  Is it a Oscars material? Maybe not exactly fitting the normalcy and the format of it but it does have rewatchability and that’s even more important to me. It exceeded my expectations and I love that! 🙂

Did you see The Martian? What did you think of it? Are you a fan of Matt Damon? Any of his roles stand out to you?