Man, W was a really hard selection. The main debate was time then it was whether I liked the genre.  Its how White House Down got bumped and the Whiplash also got waived.  I’m not exactly sure I’m ready for any of those. Its already stressful enough that I’m in a rush with time.  By the time this goes up, I’m 4 days away from wrapping up Nanowrimo. Who knows where I am right now, but I’m determined to win this.  Let’s stop the rambling. Short films was perfect for this because I watched on the first day I enforced the word sprints so on the off time, I would turn one on and it’d just be perfect for that little bit of time between doing quick chores. Plus, Disney is always so awesome 🙂

Let’s check it out! I’ve seen a few of these before but I’ll tell you which ones later 😉

A collection of 12 Disney shorts with little introductions at the beginning about the design or artwork or concept before each one. The most recent being Frozen Fever which was featured before the live adaptation of Cinderella this year.  You can see my review HERE.

This is in the order that it plays in the collection and not the order of preference. I’ll do a ranking at the end 😉 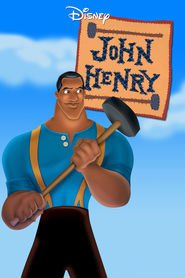 Disney’s choice to make a short about the legend of John Henry is a good one.  Its a lot of style wrapped up a little musical with good songs.  I didn’t know anything about John Henry, since I’m not exactly well-versed in American legends.  It was educational to say the least and I think the values this story carries is a good one.

I love cats.  I just do. Something like this sounds really potentially good.  Lorenzo is about selfish cat that has a curse casted on him where his tail comes to life and starts doing a tango with him.  Its all about the music.  That tango music choice is fantastic.  There is no conversation but everything is acted out by the animation paired with the tempo of the music. Would I say that its particularly  memorable? Not exactly.  There are definitely better ones in this selection but it does boast some nice musical qualities and a few giggles here and there.

The Little Matchgirl dives into the essence of world music with no sound effects or dialogue (paraphrased from the intro segment of the short). Its about a little matchgirl who tries to sell her matches with no success and ends up lighting them up to warm herself up as she imagines all her desires that would warm her heart. Okay, if I was a kid watching this, I might be a little scarred after this. Just putting it out there. The animation however is done beautifully with a moving piece in the background carrying a sad but good stories.

Who doesn’t like Goofy? Especially in his how-to shorts.  I mean, anything with Disney main crew really carries a bit of silliness.  That’s exactly what this is. The narrator is absolutely entertaining and kind of makes fun of all the gadgets and gizmos we need for a home theater. This one has a ton of nostalgic value despite being made so recent.

This is like the little awkward clock that could.  And a lesson about holding on to our mottos. I’m a fan of inanimate objects coming to life and just possessing a different point of view.  Its like a look of what comes alive when we’re not looking.  Tick Tock Tale is a really nice story. Its simple and direct but it works so well. I actually felt an array of emotions through this little clock’s up and downs. 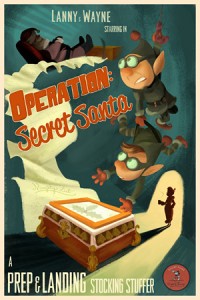 Who is a fan of Prep and Landing? For me, this new animation came along with no notice at all.  I think I caught it on TV one day during the Christmas season.  There’s a charm to this one that works so well, especially for Christmas.  This time, we’re back with a short where these two elves, Lanny and Wayne where they are sent on a secret mission from Mrs. Claus. Its just buckets of fun.

The Ballad of Nessie is kind of like the origin of Loch Ness.  This story is narrated by the most amazing Billy Connolly.  His voice is absolutely charismatic and fun.  Without this narration paired with a cute story full of a nice meaning, it wouldn’t be quite the same.  It also reminded me a lot of a Dr. Seuss story and I always love rhyming and simple stories.  That dinosaur is adorable and it had a rubber duckie. 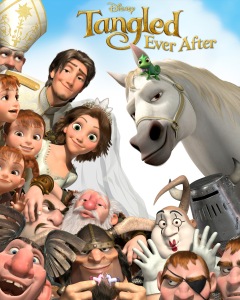 I haven’t seen Tangled since a pretty long time ago. This time, we’re looking at the marriage of Rapunzel and Flynn. Except while its their big day, we’re looking at the silly and clumsy pairing of their trusty horse and chameleon, Pascal and Maximus, who happens to drop the wedding rings right at the beginning of the ceremony and has to recuperate them by all means before its discovered and the wedding is destroyed. The sidekicks are always the funny supporting characters and I do fully agree with making shorts to give them the spotlight because they can definitely hold a 5-10 minute short and not exactly a full movie, which seems to be the trend nowadays. 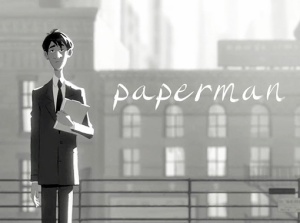 C’mon! Paperman was THE short of the year in 2012.  It won the Best Animated Short and I loved every single bit of it.  There wasn’t talking and it was a little random meeting and paper airplanes and silly things.  It was in black and white and the only thing in color was the lipstick print on the paper.  Everything about this one was great: charming, romantic, fun, silly.  I just fell in love with it. And the music is so soothing and just picks up.  I’ve talked a lot of the score for these shorts but this one definitely stands out the most.

Mickey and the crew get a modernized mash-up for this one.  Pete chases Mickey and tosses him through the screen.  We get a contrast of  what we would see in the theatre in a black and white screening and through the broken screen, there would be color.  Its a very neat way to show this short. 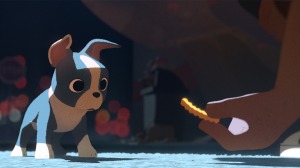 I saw Feast as it was paired with Big Hero 6, I believe, last year.  Pets just steal my heart away.  I always imagine myself adopting a stray and it really knowing how you feel.  Feast is a smart idea showing how food distinctly portrays different mindsets and phases in our life.  At the same time, it also shows how loyal and attentive our little furry friends are. Don’t you just want to cuddle Winston? Its not just Winston thats believable though, his owner is also documenting his life from being young to falling in love and getting married and having kids. Its a nice story.

I liked Frozen.  There was lots of charm with it.  It had the most infectious and easy to remember songs that just got stuck in my brain.  I saw Frozen Fever before Cinderella as I mentioned before back in March, I believe. I liked it.  It keeps the cute factor and the music is still nice. Those little snowman dudes are awesome. But, still, I exactly what you’d expect.

Overall… my ranking of these from the best to something less than the best (since I can’t say worse). Man, this is hard…

Just a note, 8 and 9 are around the same for me. I’m rating this on how memorable they are to me and just how it made me feel those fine things called emotions 😉 However, this is a fun little short films collection. Its Disney after all so you know the quality is there.

Have you seen any of these short films? Which one(s) appealed you the most?