Aren’t we feeling like the youngsters? Haha! It seems Jigsaw was given up and Les Affames was also given up for this month’s movie at the theatres and I ended up heading out to see Thor: Ragnarok with my friend. I’ve mostly been on track with the MCU films with a few exceptions like Doctor Strange and Guardians of the Galaxy Vol. 2. 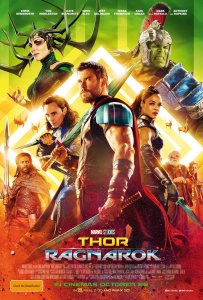 Imprisoned, the mighty Thor finds himself in a lethal gladiatorial contest against the Hulk, his former ally. Thor must fight for survival and race against time to prevent the all-powerful Hela from destroying his home and the Asgardian civilization. – IMDB

The MCU timeline has only gone through 2 years since the last we’ve seen Thor however, the previous movie, Thor: The Dark World has been four years. It is perhaps one of the first Marvel movies that I’ve gone in very blind. While Thor movies aren’t exactly very strong to the Marvel films, its always a fun time and its a very important factor of why I feel Marvel has been successful. Finding humor and blending it with a right amount of action helps form these characters and in Thor: Ragnarok, it is no different. The humor is fantastic especially with a lot of familiar faces and a few new ones. These blockbuster superhero movies have grown to be a norm to have incredibly long run times and it still is one of the criticisms I tend to have because it drags on in some parts however, Thor is also full of laugh out loud moments that it never falls flat for too long before it gets you immersed or simply having fun again. 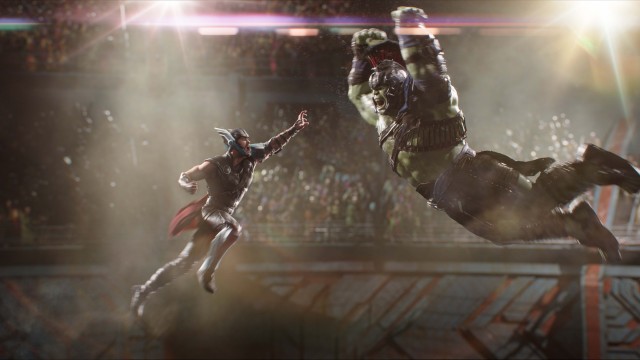 One of the best things about Marvel is that it knows that the fun in the movie, particularly in a blockbuster superhero film is simplicity. Sure, it takes a few turns here and there but everything works when its straightforward. There’s an issue then a dilemma then the superhero hits a snag that he or she needs to come back from and figure out a saving the planet or world or city solution. Nothing wrong with a little formula when you can get the tone right and the characters to be charming and engaging to watch. Thor: Ragnarok does all of that right and part it goes to having those engaging characters. Thor is always a joy to watch and with Loki being there as well, its always a fun time to watch their brotherly bickering even as they mock each other on their predictable characters. Being self aware is so important sometimes and that is the charm of it all. 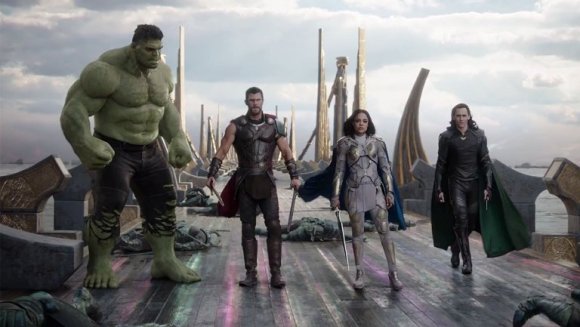 With that said, aside from Thor and Loki that Chris Hemsworth and Tom Hiddleston are so fantastic as, the other characters all have their parts. Familiar faces go to Anthony Hopkins as Odin and Idris Elba as Heimdall. Making an appearance here and some very odd funny moments is The Hulk and of course, his human counterpart, Mark Ruffalo. All delivering on their roles very well. However, its great to see some other faces here as we learn a little more about Thor and Asgard’s history and of course the little sidetrack they make into The Grandmaster’s wastelands. The Grandmaster is played by Jeff Goldblum. Its been so long since I’ve seen Goldblum in anything but he takes on The Grandmaster with so much character in the most eccentric way. The awkward moments were the centre of a lot of the comedy here. A little younger in the cast was Tessa Thompson joining into the cast as Valkyrie who was a very different type of role than what she’s done in the past and I mean it in the best way. She’s a bad-ass lady and can definitely carry her own.

Its impossible to get through superhero movies without a mention of the villain. Except, Marvel movies have the fault of making incompetent villains who lack depth. Point exactly is that I can’t remember for the life of me what the name of the villain in The Dark World is. I think it starts with a “M” but all I remember was that he wasn’t really key to anything. Thor: Ragnarok is a little better mostly because Hella is the sister of Thor. She’s the secret of Asgard when Odin was much more ruthless. Nothing like sibling rivalry to get things heated up. Hella is played by Cate Blanchett and while a lot of her scenes were truly just amplifying how incredibly powerful she is, leaving it a little empty, its still Cate Blanchett and she is a fantastic actress that adds a little something to the role. Now, I’d be lying if her get-up didn’t remind me a little of Maleficent however, Hella is a dangerous villain all on her own, especially with a right hand man played by Karl Urban who never quite gets the depth in his character.

Overall, I have my criticisms about this movie but they feel a little like I’m nitpicking because Thor: Ragnarok is downright fun and packed with some cool action and awkward humor. Its villain is more competent and its humor is spot on and the characters are versatile and awesome. Thor: Ragnarok has its little issues and a lengthy runtime but it is my favorite Thor movie so far.

Have you seen Thor: Ragnarok?
Talking about lists, I’m definitely thinking of putting together a list of best to worst for the Marvel movies. Good idea?

At a certain point, a franchise just kind of dwindles off into the space of being not so great.  Rocky is a wonderful franchise for the most part, spanning over decades.  Who can doubt Sylvester Stallone as Rocky? Its definitely one of my most memorable roles of his. When I learned that Creed was a sequel to the Rocky franchise, I had my doubts but then out of the blue, Sly gets nominated for an Oscar for Best Supporting Actor and this immediately went up on my radar. 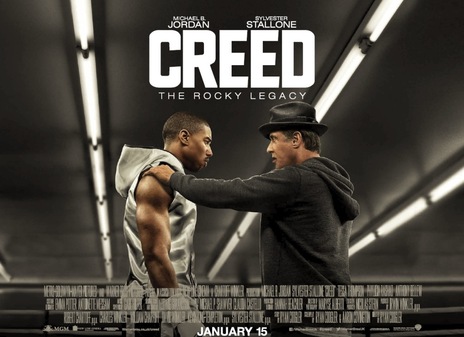 The former World Heavyweight Champion Rocky Balboa serves as a trainer and mentor to Adonis Johnson, the son of his late friend and former rival Apollo Creed.-IMDB

Rocky’s franchise has had its highs and lows.  I still find a certain level of enjoyment out of a good portion of them but Creed, that’s another story.  I’m not even going to tease you anymore.  Creed is amazing.  It pays the most respect to Sylvester Stallone’s Rocky Balboa and brings back a modernized version of Rocky but its not about Rocky Balboa, even though he’s still the tough guy we know.  Creed might get a lot of points for nostalgia and just how much we’ve learned to love the characters over the years and the sequels.  It knows how to tap into our emotions by having Sylvester Stallone have his moment with Adrian and the memory of her.  What’s great is that this fight is important to Adonis but he also has these stunted emotions that he needs to learn to embrace but still show that he genuinely cares for Rocky as well and be there for the fight.  Its a story about the relationship built between Rocky and Adonis and one about Adonis embracing who he is (the son of Apollo Creed) but also who he wants to be. 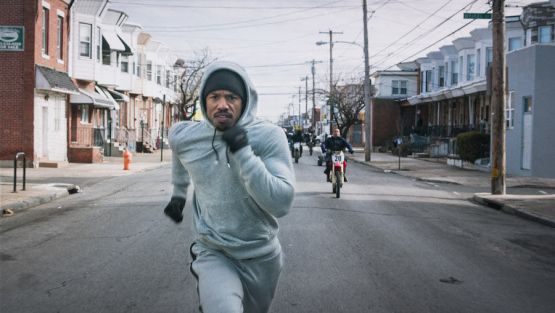 Creed does good with the music they choose to match the story.  It does well in giving the story life by moving it in a same but different direction.  The story is paced well and the characters are ones that we can learn to love and hate.  It never gets overly complicated but still manages to give us the boost of motivation and determination as Adonis fights to be better and excel at this passion.  A lot of the cinematography is done well to capture the moment.  What does need to be mentioned is that Creed is the new age Rocky.  Perhaps knowing and loving the Rocky franchise before will make it loved even more but the movie does give a bit of back story to make sure the audience knows who Apollo Creed is and Rocky and even highlighting a bit of their friendship/”rivalry”. 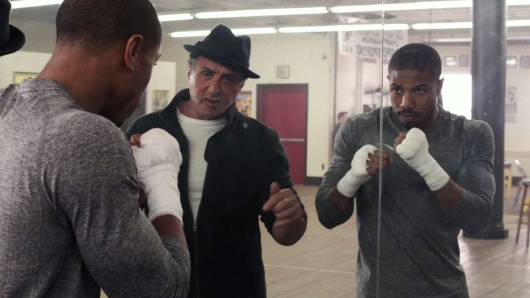 Its common for older actors to come back and continue their franchises and mock their age and whatnot.  Exhibit one is probably the obvious Die Hard and the last entry with Bruce Willis doing an older John McClane. I didn’t think it was all that bad but it definitely was nowhere near the finesse how it was done in Creed.  Aging is normal and Rocky Balboa comes back with pretty much the character but more refined and smarter.  He still is stubborn and he’s not quite up to date with what Adonis talks about at times but its a good type of humor plus this one is more of a drama so it doesn’t need to mock himself.  With that said, Sylvester Stallone is probably in one of his most thoughtful roles here as well and when he talks about Adrian or his son, I (even my husband) couldn’t help but feel a little emotional. 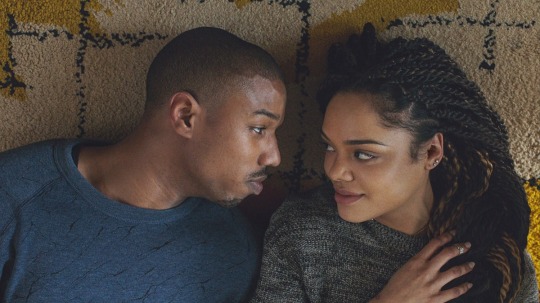 Most stories nowadays have a little bit of romance.  I mean, like I mentioned before, Adrian and Rocky was a memorable couple back in the original Rocky.  In this one, Adonis is with an aspiring singer called Bianca, played by Tessa Thompson.  Veronica Mars characters just won’t leave me alone (and I really don’t mind it).  That aside, Tessa Thompson has grown as an actress.  Romance is never a big focus in this franchise but they always do circulate around family and relationships being some sort of motivating force.  I’m not exactly sure I really feel or like the character of Bianca a lot.  If there was any shortcomings of it, it would be here but I can see her character developing to be more if (probably when) the story of Creed continues.

Overall, Creed is a great addition to the fantastic Rocky franchise.  Its possibly my second favorite out of the seven.  I had fully intended on rewatching the franchise and reviewing it but I just never got around to it.  It should be coming up though.  At my home, the husband and I are quite hyped up about this one so I can see it being something we might be doing soon. Great characters, outstanding music, and a nice story to push this franchise forward into a new but nostalgic sort of sports movie.  Most importantly, an awesome performance from Sylvester Stallone!

Have you seen Creed? What did you think of it?