I have been following T.B. Markinson and herblog, 50 Year Project for a good while now. Earlier this year, she released her debut novel A Woman Lost which impressed me a lot. You can check out he review HERE. When she reached out to me at the end of November to review her second book, Marionette, I accepted right away. I had already read excerpts she had posted and it sounded like a really intriguing book. The only deal was that I had to complete my NaNoWriMo month first so for the last few days I have been plowing through this book. Lets start with a little synopsis. 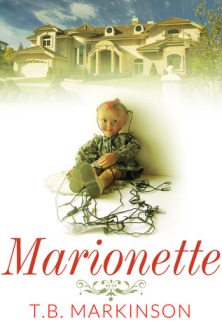 Seventeen-year old Paige is ready to go to a small town college to escape her dreadful controlling parents who blame her for past tragedies that have happened.  However, right before school starts, Paige suddenly decides to slit her wrists and her girlfriend Jess finds her in the nick of time and saves her.  Not knowing why Paige did it, since she won’t talk about it, Jess makes her promise to go see a psychiatrist to sort out her issues.  Paige doesn’t believe it’ll help but she reluctantly still does it. However, at the same time, she’s trying to hide being a lesbian while in college, one to prevent her parents from finding out but also as the debates of gays and lesbian equal rights are brewing and tension builds up, she does it also to protect herself and Jess.

Hmm…so how to start? I really liked this book a lot! Marionette is an extremely captivating read and the best part that I liked was how Paige’s character went from this somewhat selfish and irritating girl to a more refined person as the story moved along. I love character development and a lot of times its hard to find a good story with that.  This one did a great job. Plus, the other characters that supported Paige, especially Jess was fun to read about.

There was a sense of suspense that kept the story going because we don’t get the final reveal of what the deal is with Paige and her parents and even her sister except during the little parts as she opens up about the whole situation and why she feels the way she does, and the big mystery of why she tried to commit suicide. We start with questions and then as we move along, as the situation opens up, we continue develop into something a little more complex and thats what makes this such a page-turner. As serious as this situation first starts, Paige and some of her cluelessness also makes it have some humorous moments to loosen the mood.

Overall, an extremely enjoyable read that I’d definitely recommend. Its intriguing and awesome! I devoured this super fast and I look forward to any future novels by T.B. She’s awesome and you need to head over and check out her blogs if you haven’t already: 50 Year Project HERE and Making Your Mark HERE! Show her some support and if you like reading, give her novels a shot, I promise its worth your time 🙂