As we step into April, the world is in a surreal state with COVID-19 running out lives back to the safety of our homes for those who aren’t essential services and/or can’t work from home. I don’t want to talk too much about it on the other posts but as Adventures is more of a personal offering, its hard to not touch on it. I’ve been saying whenever I mention this that its important to stay positive and with that said, we look at the pros of the situation (despite all the bad) and that is we learn to appreciate and be grateful that we still have this blogging community to hide away from the surreal reality surrounding us.

There’s not much to say about working from home other than the fact that April was a crazy month. March was just adjusting to working at home and then April hit so hard because staff decrease and I had to work a 2 person workload. Luckily, I had some help as I slowly got the office set up with the printer and getting new cartridge and stuff that took longer than usual to arrive because of the current situation. I’m starting to realize how hard it is to work non-stop for such a long time. Luckily, April is over and my staff will go back up to almost normal so I can work through May, hopefully more peacefully!

Game Warp is slowly coming back to life as we settle through our direction and how the shows that we’d like to do in the coming while. Our latest podcast is a review discussion on Life Is Strange 2 which recently won the BAFTA Games Award for Best Performer in a Leading Role with its character of Sean Diaz. We did record this before the whole awards thing so its just a coincidence that we released it at the same time.

As I struggled through how to structure the audio podcasts to be more appealing, my wonderful co-host told me Headliner which is how I made this video. Learning about new things is one of the fun things about blogging and podcasting. Hopefully you like the podcast! Of course, you prefer the audio version, you can find us on Anchor and a ton of other platforms.

Right before this post went live, we released another episode for Game Warp as a list/discussion piece on Greatest Female Characters as well as listing our favorites.

This might be an unusual time but we can still be grateful for the little things like the #garden coming alive. The #perennials are starting to peek out of the ground . #spring #gardening #sedum #rhubarb #greenonions #tulips #plants #backyardstroll

I do have a bunch of pictures for another Instagram post but then I never go around to posting it up. The garden is indeed coming alive and much more vibrant than the beginning of April. Blueberry is starting to show signs of life along with raspberry and strawberry. The trees are coming back as well. Then we have the perennials especially the new ones last year in the bee garden are mostly all coming back! I promise to share pictures soon on Instagram!

Nothing like blogging more and recording more for podcasts during this time. Movies and Tea is releasing on a good schedule now as we are having a decent backlog! Its all thanks to my awesome co-host Elwood who gets all these shows edited and released, of course! Ang Lee season is almost over. Above is the penultimate episode of Ang Lee for Lust, Caution.

On other news, which I hoped to share with you all this time around, Movies and Tea Podcast will be on Youtube soon. Its a new avenue and will be done with Headliner in the audio format as well. The channel is set up but its mostly putting up all the archive episodes gradually. I’ll give an update in May for sure!

Everyone is trying to make the best of staying at home as something that they are tackling. I’m sure when you flip through your feed that you see a ton of your own friends tackling baking, cooking, entertaining others through music, streaming, etc. For myself, I’m more of an introvert and while I did say that I would stream if I got to work at home during this ordeal, things didn’t quite turn out that way, as explained in my “Working at Home” section above. However, I did set myself a new goal and that’s to pick one song to play on the piano really well (maybe not perfectly since I’m far from that) but be able to play it and sing at the same time. I’m mostly doing separate practicing right now: piano and singing done separately but soon, I might be able to start putting it together. The song that I picked is Encounter by Stefanie Sun, which is one of my favorite songs and I used to sing it well enough but singing is a tad rusty nowadays. Call it practice or whatever but its been really fun doing this.

That’s it for this April Adventures!
What adventures, right? Shameless self-promotion is what this mostly consists of!
I’ll try my best to get a better routine down in May once I have more time!

Welcome to the March Adventures! March is a big month. Not so much for work (such a rare thing to say over here) in the beginning until the pandemic was announced and things took a flipside and changed the working situation and the general routine.  Not quite the way I expected my husband and I to turn a year older but hey, what can you do, right? On a happier note, as a lot of us have shifted our lives at home, I’m 34 today and celebrating in the beautiful confines of my home, still employed and healthy! In the state of things right now, its important to be grateful and appreciative for the things that we have!

Early March wrapped up the Ultimate 2010s Blogthon that I co-host with Drew’s Movie Reviews as we celebrated with our fantastic guest reviewers their favorite/most significant 2010s movies. You can find all the entries HERE.

I had a day off in early March after a 10.5 days work week to recuperate. The husband also had that day off so we ended up going to do some shopping since I needed to upgrade my skincare routine. You can see the new purchases. I had a birthday discount card so it was alright. We also had a lovely lunch at La Belle et la Boeuf eating some burgers.

Little did we know how things were going downhill after this date outing.

Right before we had all the social distancing orders from the government, I did manage to have a few last hurrahs with friends.

The first was checking out the new bakery at a new condo district called Boulangerie Ange. We did pick up some bread, croissants and baguette while trying out their breakfast combo. Its pretty good and would definitely be something to check out later on when things get back to normal.

We also managed to squeeze in another restaurant hangout with our Battle of Ingredients crew at a Greek tavern called Kavala. I was going to do a post on it but have decided to postpone it as its not like restaurants are currently open (other than takeout and delivery). Either way, it was a delicious place but I’ll talk more about it afterwards. On that note, Battle of Ingredients is, of course, on hold until further notice when things get back to normal. 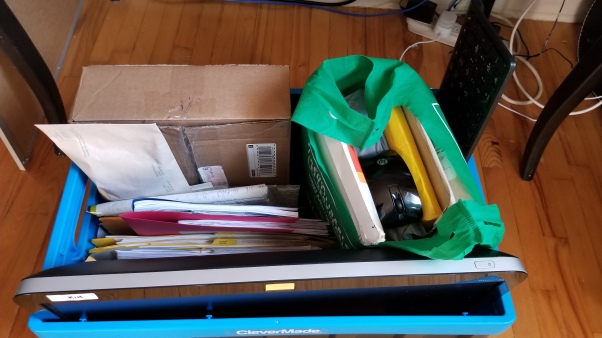 After a week of nerve-wracking public commute to work with all kinds of preventative measures in the bus and sanitization and home cleaning, my boss figured out a way to let me work from home. Although, above is only immediate needs for the week or so and I do have to pop back into the office every week or so to grab new documents and drop off work done, its been a fairly quick adaptation to working at home although its somewhat changed my routine as I’ve needed to add in time for doing things I’d usually use for reading and walking to work as workout. Still, I can’t complain as I still have a job as we’re considered essential services when the province lockdown came into effect. As of writing this post, I have already gone back to pick up another crateful of documents to work on as we’ve outlined the goals for the next few weeks.

Gettin back into some #baking and back to the basics with making #chewy #chocolatechip #cookies . #sweets #chocolatechipcookies #snacks #dessert #chocolate #chewycookies #homebaking #homemade

In lieu of the current state of events, I have already talked about new routines. While I’ve been trying my best to keep up with setting a new routine, mostly with better chore management during the week. I’m slowly finding more time to get in the other projects. You should be seeing more baking related posts (yes, Baking Through Disney should show up after a few little basic baking to get myself back on track to make sure I’m still good with the basics and organization. At the same time, I have an huge amount of backlog of double features and TV binges to write as well as a lot of  book commitments and blog tours to work on over the next little while. Content should be back on track as I know the last 2 weeks or so have been a little all over the place.

At the same time, Elwood and I have been working hard on getting ahead with both Game Warp and Movies and Tea podcast recording so remember to check out our wrap up for Season 3 as we look at Ang Lee and then our After Hours and Shark Week. You can check out Movies and Tea HERE and Game Warp HERE. More podcasts and written reviews/posts will coming up from myself at least as I start finding time to wrap up a few of them. In terms of gaming, I might actually start streaming soon as I kind of made a deal with myself that if I had the ability to work from home and had more time that I’d start doing that..just deciding on the game to stream right now.

That’s it for the March Adventures!

I’m going to assume right now that if things stay the way they are, I will have to be a little more creative with the April Adventures as its less adventures in the going out but more what I’ve been up to at home. I have some buried project ideas and whatnot that I want to find time to do so we will see.

On that note, feel free to share what you have been up to? Have you been confined to your homes as well?