This week, experiment with light and capture a silhouette.- The Daily Post

I believe there’s already been two other silhouette photo challenges I’ve done before so I’m not going to dive very far into my pictures.

Silhouettes are lovely things to capture.  It could be the reflection on the road.  I love taking the elongated version of myself with the sun shining behind me.  It could be the evening sun given a mysterious dark figure doing whatever they are doing.  I’d really like to catch a shot where its like a romantic moment silhouette in the sunset.  Now that might be the shot of my dreams.  Except I don’t like taking pictures of strangers.

From some of this past year’s adventures 🙂

The most recent being the weekend getaway two weekends ago to Saguenay and my visit to an observation center at Saint David de Falardeau.  I’ll be posting up pictures of the trip once I find time to sit down and sort through everything 🙂

Not yet Halloween, but stores are starting to sell costumes.  It reminds me of the very dark event lit up with only Jack O’Lanterns of different sorts. You can see the silhouettes of the contours of the pumpkin with the dim light 🙂

Last I take you back to the Festival of Lights in Montreal in the Biodome at Nighttime.

Here’s the silhouettes I thought of sharing. What do you think?

Are there words in your life where you remember exactly when and how you learned the meaning of them?

Silhouette is actually one of them for me.  It used to be a yogurt brand, is it still? After I went full-on lactose intolerant, I avoided that aisle because not being able to eat yogurt is depressing for me.  Still, thats not how I learned the meaning, of course. I learned it from a movie! Any idea which one? Mary Poppins! When Bert goes, “I’d recognize that silhouette anywhere” when Mary Poppins shadow shows up in one of the chalk painting frames.

Thats what I think of when I hear that word: Shadows on the ground!

Excuse that finger in the frame.  It was my first weekend with a smart phone.  What can I say? Inexperience….Now I do it less often 😉

Honestly, I like taking pictures of my silhouette than my physical self sometimes.  At times, it makes me look so slim and slender, not to mention tall.  My 5’4 height challenge does have its benefits (in Hong Kong) but not here….especially when I’m at a standing concert!

Although it did allow me to capture silhouettes of the crowd in front of me, who are as hyped up as I am!  Just like at the concert this week! I’m working on a post for it.  Its just a lot of pictures to shift through 🙂

Silhouette of the crowd hyped up at Boyce Avenue performance!

Here’s my reponse to A Word in Your Ear’s A Word A Week Challenge: Silhouette! Check out other silhouettes HERE!

Silhouettes are the outlines of an object.  Many times we get that through having a brighter or more brightly lit background and it contrasts the closer images to be darker.  I really like these effects in pictures but then I don’t use them a lot because you can’t have silhouettes of everything and not see the details and the actual image, right?

Saying that, I do have a few that I’ve taken.  Some are from past festivals that I’ve been to and one was from this summer.  I had posted a similar picture in a previous post about my trip up north of Quebec to Saguenay Lac Saint Jean region.  Its probably one of my favorites shots I’ve ever taken.

A snapshot of the silhouette of one of the band members! 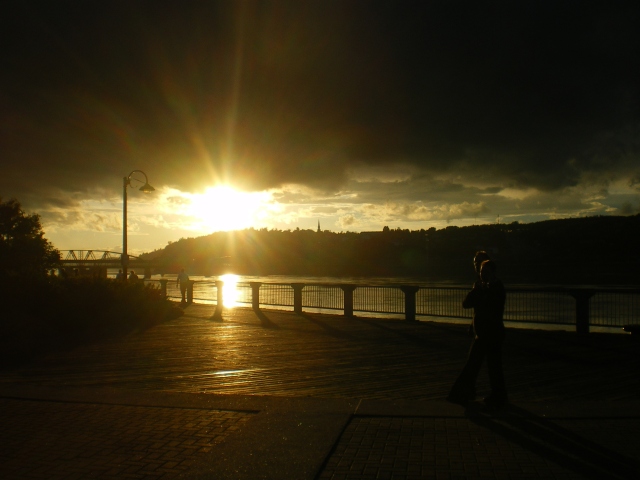 Don’t you think sunsets are just the most beautiful? The silhouettes it creates are also the most enchanting and attractive, calm and peaceful.  All sorts of great feelings!