Moving back into the Saw franchise, we go to the fifth installment! So far, its getting disappointing but some have told me it’ll get better. So fingers crossed, I guess… 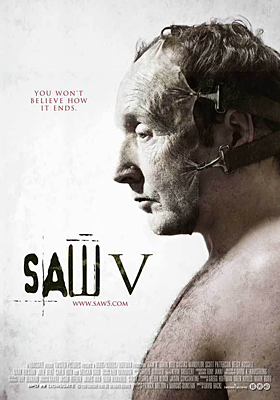 Following Jigsaw’s grisly demise, Mark Hoffman is commended as a hero, but Agent Strahm is suspicious, and delves into Hoffman’s past. Meanwhile, another group of people are put through a series of gruesome tests. – IMDB

Saw V deepens the story a little more as we take a look at how Hoffman got chosen by Jigsaw as his apprentice and to pick up the job after his passing. It ties in some parts of the past movies and actually does kind of make sense. Saw V has its gory moments particularly one of the first deaths at the beginning which is literally gut wrenchingly disgusting. Its really not my cup of tea. It didn’t make me feel scared or anything, just made me turn away so I wouldn’t get all nausea and shut the movie off. However, once we get past that part, the story driven elements runs a little deeper here, its interesting to kind of get a better idea of the timeline of the story while still having that element of the Jigsaw game. Its also cool that its quite obvious that the Jigsaw voice has changed to Hoffman’s (maybe slightly) distorted voice. Point is, I like the general direction of this one a little more than the previous two, at least. The only issue is that the movie does jump from scene to scene from Jigsaw and Hoffman to the elaborated captives trying to escape and then to Agent Strahm who is tracing back the steps. At times, this makes it feel slightly fragmented/disjointed. 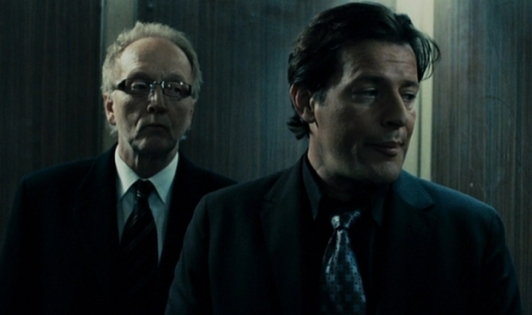 I guess the approach here is to look at the three stories they are telling. Hoffman and Jigsaw are interesting characters. Hoffman is kind of a messed up cop because of a tragedy and he is vengeful as well and in some ways, Jigsaw was about to see through it in a see of people and know it was him and handpicked him to have an opportunity to learn his talent of anticipating human nature so that while it seems like his victims have a choice, they actually have to break out of their instinctive nature to make it out. And its pretty clever in that way, especially when we see Hoffman finally embracing that at the end of this one. Is that considered a spoiler? Maybe…I’m sorry.

This brings us to the captives caught in the game which may have a deeper purpose in the story which I haven’t quite figured out yet or the story hasn’t gone there but it did help emphasize on the fact that these were people connected because of an incident which they eventually figure out however, they also become victims of their own nature of self-preservation and not being able to break out of that mentality causing them to have deadly endings. In a way, its also pretty clever, especially the games in each room they have to encounter because by the end, you see that the game was set up so that everyone could survive as long as they were able to think out of the box, which obviously they didn’t. The games itself weren’t particularly gory instead it was on the effect and surprise of what had to be achieved. There’s a little more of a psychological aspect here even if at times, who was going to die or make it became slightly predictable.

The reason and motivation of my desire to continue after the third was all on Scott Patterson and my love for his character in Luke. Sigh~ I have to say that he takes on Agent Strahm and is the highlight of the last two. His character is cool because he’s smart and he traces through all these things and then realizes that he’s caught up in something that is way ahead of his expectations. However, his part as he traces to Jigsaw’s building and then goes underground and goes back to these traps (that somehow are still there) and looks back at previous movies of why they are there. My main issue with this is that he finds these trap doors or something in the walls and yet the police and forensic  or whatever investigative team didn’t find it the first time around. Doesn’t that feel like a trap? It just lacks a little bit of sense.

While it seems like I’m really not enjoying Saw V, there are some redeemable parts of it as long as you don’t try to make it too sensible. I have issues with how the story flows and even the timeline of it. But I have a feeling that when Hoffman’s lifespan as the Jigsaw apprentice wraps up, depending how long that is, we will start to get a full picture and everything should piece together. At least I sure hope so. As for expectations for Saw VI? I have none. Its the best way to get into these movies at this point. I just need it to somehow piece together without the feeling that the best parts are always in their finale because this formula is getting old really fast.

Have you seen Saw V?