Welcome to the next Goodfood. Its been probably about a month. This is definitely back to a monthly basis at this point. This time’s picks are fairly summery in my opinion, at least getting into the more warm weather foods that we tend to learn towards. There are some repeats and some that feel like a little twist added to something we’ve done before.

As always, seafood meals kick off the Goodfood meals. This time, we start with our repeat meal. The last time we had this, I believe my husband made it so it was a new experience for myself. Other than the fact that I’d love to know how you break corn into 3 parts (my husband says the cleaver is how to do it) by hand, this meal was pretty good. The shrimp was nice and its pretty simple to put together. It has a few steps to it like boiling the corn and potato first before putting it in the oven with the shrimp. The sauce that they say to make with a butter base (which I replaced with margarine since we don’t have butter at home) was really delicious. The green salad also had a good oil-based dressing to it and was a refreshing side. 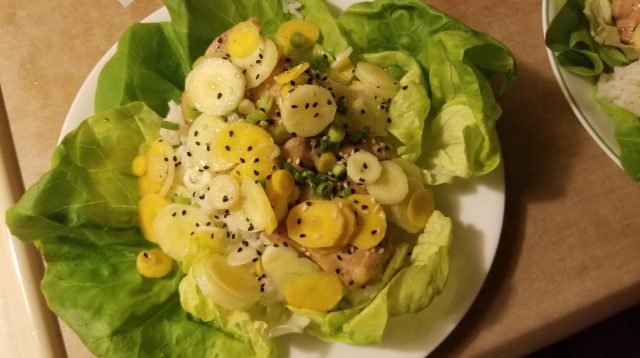 My favorite meal of this meal kit goes to this recipe. I’m always a big fan of the Asian foods here. They usually are pretty decent. Its been a while since I’ve tried some lettuce cups and such although I did end up eating it all separately in the end. However, the chicken is really good although it takes some attention. At the same time, the carrot salad is a bit like preserved style so has this sour flavor to it but it matches really well to balance out the flavors here. Plus, the sticky rice is one of the fave parts of these meals whenever it appears since I don’t buy Calrose rice but I definitely should just to be able to eat more sticky rice, not to mention the sauce the blends in with it from the chicken is just delicious.

Tofu meals are usually hit and miss for us however we keep trying them out because its a good source of meatless protein and its always nice to add a vegetarian option every once in a while when we get a chance. While I can’t say the tofu itself was anything great (I’m not a fan of the extra firm tofu), the curried sauce was pretty good. The roasted vegetables are also pretty good and the thai basil salsa verde was also surprisingly a good addition to add some different flavors to the meal.

Burger choices are normally for my husband because he likes trying now types of burgers. This menu feels familiar and yet also feels like a past one we have had but maybe with changes. I can’t quite remember right now. It was a pretty good one although, I have never had uncooked bok choy so was a bit skeptical and after this, learned that I prefer it cooked. It is somewhat of a messy burger so I ate it all separately. Everyrhing was alright except note to self, with miso based sauces, it already starts off quite salty.

Thats it for this Goodfood recap!
Any meals that peak your interest?

20 boxes into this Goodfood journey! There really isn’t much to say anymore other than the fact that I love doing these recaps.

Although, this box was kind of sounding really good but also very experimental? Who knows, right? If Goodfood has taught me anything, its to be adventurous in my foodie and cooking adventures!

A lot of firsts here. I’ve never actually made yakitori before and rarely have attempted the kabobs things either. That turned out to be fairly simple. I never had thought about roasting Yu Choy in the oven but I guess that also does work. It just works a lot like kale and I think the recipe is still a little borderline on how long it keeps it there so mine turned out a little burnt. However, Chicken Yakitori did turn out to be really delicious. They had some lovely spices and other than the prep work for the kabobs taking a little longer, this recipe was pretty tasty and well worth the work.

Vegetarian Paella sounds a little odd but we’ve been exploring these vegetarian takes on food with these boxes and most of the time they don’t disappoint. Unfortunately, we weren’t a huge fan of this one. The zesty taste was a little too abundant for my taste. It was the first time I tasted marinated artichoke and that was also really acidic. I didn’t have an issue with the artichoke but more the fact that it was so acidic. Then there was tomatoes also which were also really acidic. This dish was just a whole plate of off balance. Can’t say I’m a particular fan but my husband was a mega champ and helped take care of what I didn’t want to eat. A rarity in our home because I usually manage to finish everything and am not a picky eater.

I should have looked at the ingredients more carefully when I chose this one. I never thought that the cheddar and bacon was actually a cheddar and bacon sausage. So my husband had the real deal, except the pictures turned out bad so I’m using the modified version. He was the master chef before this meal and he didn’t buy into the stuffing it overly and making the bun soggy and mine is a sausage with bacon so pretty much we modified this recipe to our own liking or at least in presentation. The homemade ketchup was pretty good. I can’t say it delivered quite as well as the awesome looking picture in the recipe looked like it would taste. Still, I love hot dogs so any excuse to have one is fantastic.

Finally, the beef tacos! I actually put together 75% of the meal but then my husband wrapped it up and also I ended up just telling him to eat it because it would have too many modifications. According to my husband, the beef tacos were quite good. He’s into one word responses when it comes to food so honestly, it did smell really good as I was cooking it. The spices were great and the beef smelled good. The slaw was easy to put together. There was a decent amount of prep work for this since its a lot of cutting. It also uses tomatillos as the salsa verde and we have to roast it a little in the pan which was a pretty neat cooking experience.

Overall, this box was a little lackluster. My fave went to the Chicken Yakitori.
One of those weeks that we picked recipes and well, I just had to modify a lot to my allergies.