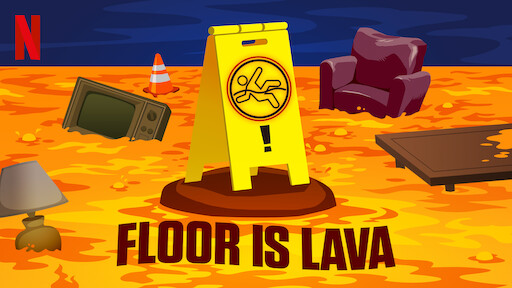 Teams compete to navigate rooms flooded with lava by leaping from chairs, hanging from curtains and swinging from chandeliers. – IMDB

Anyone hanging around this blog knows that I’m a big fan of binging these reality competition shows from Netflix so in when Floor is Lava was announced, I was really excited to see how it was going to be. In concept, Floor is Lava is a great idea as its a bit of the amateur version of Ultimate Beastmaster where its just every day people teamed together to make it to navigate the room and make it to the exit.

Its definitely a fun idea and for the most part, its pretty entertaining and a lot of it is thanks to a great hosting effort from Rutledge Wood, who has moved from his car-related shows to this type of game show (although I’d really like to know whether a second season of Hyperdrive is going to happen at some point). Still, he pulls off some great background voice with some good jokes and narrating over the whole happenings of the course.

The rooms themselves are quite interesting to watch but as a lot of teams do work in similar fashion, some of those episodes are a little more repetitive. Luckily, these episodes run at around 30 minutes each so it keeps things pretty quick. It has that unknown factor of how many will make it to the end but at the same time, it doesn’t have that many surprises but then, this is a reality show and you can’t really control how things turn out. Lets face it, a lot of these shows work because of watching how these contestants fail or overcome those more challenging obstacles.

If there was something to comment on which makes this show a little inconsistent and feels like they are still using Season 1 to experiment on structure over the 10 episodes.  Here’s the general idea of the structure over the 10 episodes and the changes that occur so that its gives a better view of what I’m about to discuss. The show is structured in first 5 episodes are five different rooms titled Level 1 and the last 5 episodes is Level 2 of the same rooms except with some little changes like booby traps and such. However, not only do the level changes but the second half also fluctuates between some episodes having 2 teams battling it out and then 2 people teams instead of the normal 3 people team and these little changes in the norm happens for one episode here and there. Its a good and bad thing. On one hand, its good because you can see it as variety. However, on the other hand,  it felt more like an inconsistency and not sure why they chose to do it this way. Maybe it meant to feel refreshing. Its not exactly a criticism but something that I’m not sure how I actually feel about it as it didn’t feel like it added to the show as I had enjoyed the original structure of three teams going through each room per episode.

Overall, Floor is Lava is a fun concept. Its something of a silly entertainment as its not exactly serious especially the over the top sinking into the lava portions for the contestants. There are some little things I’m not quite sure about with the structure they chose throughout the season however, Rutledge Wood’s hosting is one of the standout points and some of the room designs are pretty fun and vary in difficulty level. The show has some  space for improvement and hopefully if it does get a second season, it will decide on a more solid structure. Still, its fun enough that I would watch another season.