To Dream the Blackbane
By: Richard J. O’Brien 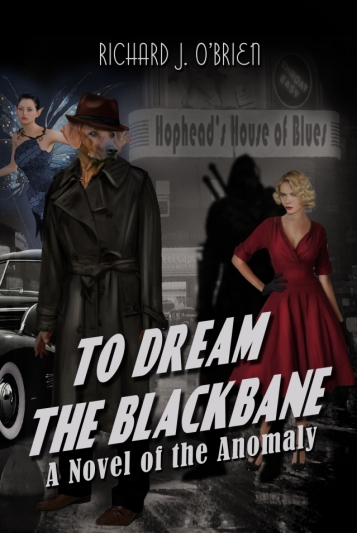 A cosmic event in 2015 fused Earth with the faerie realm. Scientists referred to the event as The Anomaly. A byproduct of The Anomaly was the advent of hybrid beings—people who became mixed with whatever animal or object was closest to them the moment the event occurred. Humans, or pedigrees, soon relegated fairy refugees and hybrids into ghetto zones in large cities.

One night, two vampires visit Rex and offer him a substantial reward for the recovery of a stolen scroll. Later that same evening, Charlotte Sweeney-Jarhadill, a pedigree woman from Louisiana, visits Rex and hires him to exorcize the headless ghost of a Confederate soldier from her home.

To complicate matters, the private detective ends up falling for Charlotte. Meanwhile, the vampires demand results in the search for the missing scroll. When Rex’s assistant Sally goes missing, he must stay alive long enough to find her. Charlotte and the vampires, however, have other plans for Rex.

My name is Wolfgang Rex. I am a private detective. Once upon a time I’d been a police lieutenant. After twenty-five years of service to the city of Chicago, I retired in 2063 and opened up Chi-town Detectives, a private investigation firm.

I’m what they call in the medical books a second-generation Anomalous cross-breed. My father was a cop like me. One night he was out walking his dog, a Rhodesian Ridgeback named Rex. My mother hated that dog. After she died I learned that she had always wished that Rex would meet some unfortunate demise. She got her wish on the night of The Anomaly. My father came home from his walk without the dog—in a manner of speaking. For lack of a better term, he and the dog had fused. And the result was a humanoid—with a hairy body, a tail, and the head of his old dog Rex. My mother was horrified, but my parents were both Catholic. So they stuck it out. I was born in the tenth year of The Anomaly. When I was a kid, my mother used to read me fairy tales. She died before I finished high school. So it goes, like Kurt Vonnegut once wrote. I turned out to be the spitting image of my father post-Anomaly. I lucked out with being born without a tail. My father had somehow managed to keep his human vocal cords. My face was less hairy than his, but our snouts were nearly identical.

Learning to speak with a dog’s mouth was tricky when I was coming up, but I eventually got the hang of it. And thank Christ I’d been born with opposable thumbs; otherwise, I would’ve starved to death a long time ago. Still, given that many people melded with inanimate objects—much like that poor bastard who became a stone gargoyle—I constantly considered myself lucky. My father cursed his lot for the rest of his life. Some people, like my old man, never learned to adjust.

Richard J. O’Brien is a graduate of the Fairleigh Dickinson University MFA in Creative Writing Program. Richard’s novels include Under the Bronze Moon, Infestation, and The Garden of Fragile Things. His short stories have appeared in The Del Sol Review, Duende, Pulp Literature, The Dr. T.J. Eckleburg Review, Weirdbook, and other magazines. Richard lives in New Jersey, where he teaches at Rowan College at Gloucester County and Stockton University.

International Giveaway: For your chance to win 1of 2 digital copies of To Dream the Blackbane, click on the link below!

North America Only: Win 1 of 2 print copies of To Dream the Blackbane, click the link below!