The first few short stories for Halloween month is here! A year or two ago, I did the Fables of the Undead’s first three books (which are more like short stories). They belong to a bigger group of books called Zombie Kids Books by Dina T. Seth.

We are back with the remaining three books of Fables of the Undead series. You can check out my review of the first three HERE.

Beauty vs the Beast (Book#4)
by: Dina T Seth 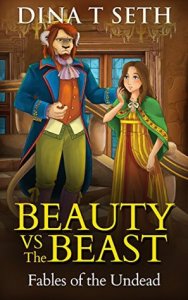 When her father inadvertently brings the zombie plague to the Castle of the Beast, little does Belle know that she will have to live there too, as the sickened Prince’s prisoner. But how long can she survive against a zombified Beast before she too falls prey to the terrible sickness? – Goodreads

Beauty vs. the Beast doesn’t quite have the charm the first three had. For the most part, the stories are still morphed but they are predictable, even in how our Disney princess Belle gets zombified. The writing didn’t feel as engaging either but it did give a more honorable take on Gaspard (aka Gaston). Some of the description is very vivid near the end and I still question how suitable it is for kids to read but they do hold a horror element and those descriptions are usually at a minimum. However, the idea of Disney princess as zombies still has an appeal to me just because I like how they twist the story around. The pacing here is a little lacking but it remains a quick read. Plus it makes an effort to link to a previous story and that helps with the story while still keeeping it a standalone story.

Cursed by the Witch Queen, baby Princess Talia spends eighteen years living in fear of needles. But when the inevitable happens, an ancient curse of the undead is brought to Vernalia Castle, and the Princess and all its residents must be preserved by a magical spell……One hundred years later, a brave knight discovers the castle hidden within the Deep Forest of thorns, and inadvertently wakes up a zombie horde. Can he escape a living tomb of risen royalty, zombie fairies and a fearsome undead dragon!? – Goodreads

Sleeping Zombie is a twist on Sleeping Beauty. I’m sure its all wildly apparent. This story starts piecing together the whole series where we see a connection to the zombie plague that has broken out. Its not hard to imagine what will happen especially since I’m not a kid anymore. However, this book is a bit more exciting. It plays similarly to the original and the twist is rather apparent however, the characters here are fun to read. There is more to think about and more to look forward to. There is a solid setting and it seems that the plans of why this undead plague has hit the fairy tale world is starting to reveal itself of who the culprit is.

Rapunzel-Tower of the Dead (Book #6)
by: Dina T Seth

For seventeen years, Rapunzel has been held prisoner in a hidden tower. Her only contact with the outside world is via her “mother”, the evil Witch Queen – and now her slave, the brave knight Sir Cecil. Unfortunately for them all, a century-old zombie plague has awoken in the nearby Kingdom, and Rapunzel’s prison has become a tower of the undead. A Sir Cecil fights to protect her from the risen dead, little does he know that Rapunzel is infected too… – Goodreads

This is what I’m talking about. The last book of the Fables of the Undead wraps up the story a little more. We have continuing characters and links back more to previous books. It is well-paced and pretty clever with what it does. I don’t know much about the Rapunzel story other than her long hair and being in a tower so it didn’t matter to me how it would go since it would all be a surprise. However, it is fun to read and pretty exciting with some action and some mystery and even a bit of romance. There was a nice balance to everything. It is definitely a fun read. Even if you haven’t read the previous books in the series, it would matter too much either.

Overall, Fables of the Undead series is good because these books are standalone stories but keep a few links to make sure that it still has some connection. It is quick and short and rather easy to read. Some of the books fall a little flat at times but for the most part, it is pretty entertaining for the most part. There are some vivid descriptions that could be a little disgusting. However, it isn’t too disturbing, although I am still confused whether this is for kids (even I assume it should be seeing as its called Zombie Kids Books).

Have you read any of the Fables of the Undead yet?