The Super Bowl weekend just ended and this has been in queue to be written for a while so I figured that we’re in Valentine’s marathon time and desserts are a staple here. I’m not sure I’ll get any desserts done as work has been hectic but I’ve been getting lots of baking ideas and techniques I want to learn from watching this reality competitive Australian baking show called Zumbo’s Just Desserts, hosted by Adriano Zumbo and Rachel Khoo. At this point, I put it on in the background a lot just to keep myself motivated so I’ve watched it a few times to say the very least. With that said, you probably already know how I feel about it. 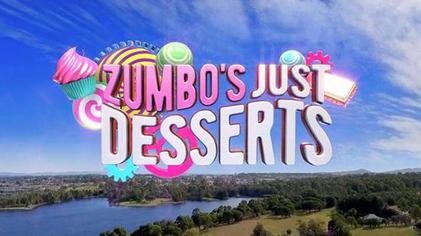 A competitive baking show? Count me in! Despite my many unsuccessful scheduling to get back to baking, it is still an immense passion of mine. I honestly don’t know fancy bakers around the world so it was the first time that I even heard about Adriano Zumbo. He is paired up with Rachel Khoo who is seemingly not only as knowledgeable about dessert flavors but also quite charismatic to watch as a team. However, their 12 competitors are the real stars here because they are all different in personality and while most have likeable traits and great aspirations and fantastic talent, they also have somewhat of a villainous competitor here who helps balance out the show and really give it some human drama on who to root for. 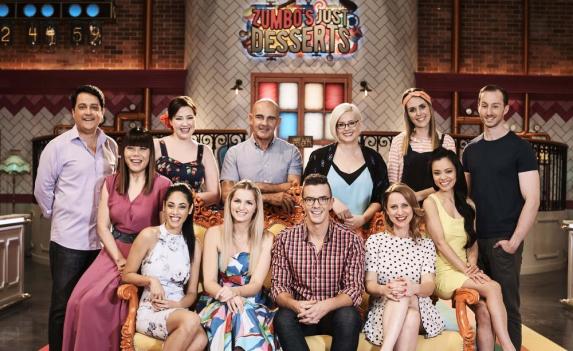 The show breaks down into 12 episodes which sees the contestant with the lowest score be eliminated from the show in each episode. Each episode consists of two rounds. The first is called a Sweet Sensations task which runs along the theme of a day. There were color coordinated fresh fruits, magic, fire, kids birthday cake just to name a few. The two with lowest scores go into the second round head to head to fight for survival in a Zumbo Test. If you didn’t know Adriano Zumbo before, well, his Zumbo Creations are jaw-dropping awesome. Complex but awesome. And this probably will give a great idea of his dessert creator abilities. In the Zumbo Test, the two have to recreate his dessert in the allotted time. The various themes and absolutely Zumbo’s creations are the highlights here. The struggles and the successes make this show really fun to watch. Its always down to the wire and its really exciting to watch because the skills and ideas are really fantastic and watching them being executed is a lot of fun. 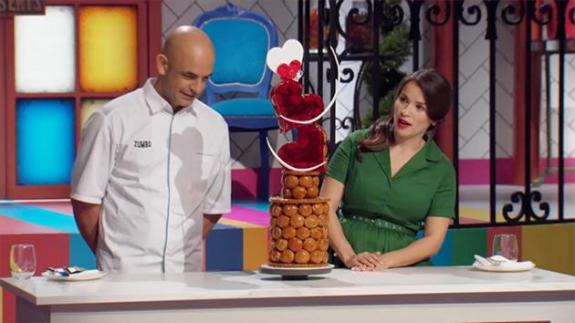 What I did like a lot for the show, even if it felt a little showy and over the top was the location and set design. It had these colorful tones and felt like walking into Willy Wonka factory. Its pretty fascinating and emphasizes on the wonderful world of baking. Well, its wonderful because I love baking. If you put aside the setting, something else I really like is how they introduce each of the plates that the competitors conceptualize in this sketch like below. I think its really neat because you get to see whether the end results actually happens. Let’s face it, the best part of reality TV is that things happen out of their control and its those struggles and how they push through it that make it fun to watch. 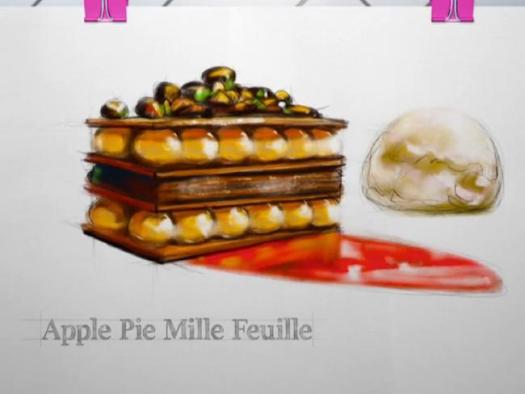 Overall, Zumbo’s Just Desserts is a really great show. Its fun and cool and very exciting to watch. There’s a nice balance in the competitors on their different styles and strengths. Zumbo and Rachel Khoo are a nice team together. The setting emphasizes on the enchanting world they want to have here. Zumbo Creations are just from another world and makes me want to work hard to bake better and learn different techniques (although the hard part is everything I do has to have a somewhat vegan twist). I have a few criticisms of the show but nothing that has stopped me from binging it 3 times already on Netflix. I would have loved to see them actually talk out how they determined the scores though as sometimes their criticism seem to not exactly match the scores they give. I’m honestly just hoping there will be a Season 2 soon.