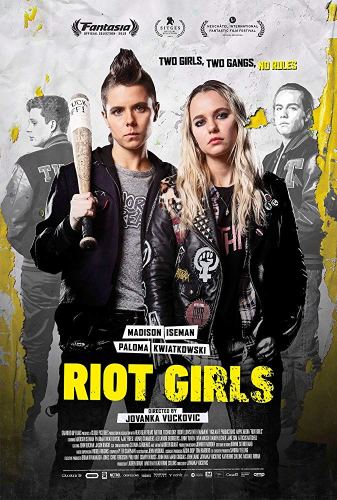 Riot Girls is a 2019 Canadian action coming of age story where adults have been wiped out by a mysterious disease leaving two groups of kids in one area to fight against each other over territory, resources and survival.

Set in an alternate 1995, it zeros in on a town now divided by West and East side, named exactly as that, Westsiders and Eastsiders respectively, these two groups are run very different. The Eastsiders are run by big brother Jack (Alexandre Bourgeois) along with his girlfriend and younger sister Nat (Madison Iseman) and her girlfriend Scratch (Paloma Kwiatkowski). When Jack goes for a resource run and ends up saving Westsiders escapee Sony (Ajay Friese) and consequently, taken by the Westsiders, Nat, Scratch and Sony set out to rescue him from the Westsiders turf in the center of operations at a high school from the hands of jock leader Jeremy (Munro Chambers).

Right off the bat, there is a lot of style in the execution. Riot Girls uses a comic strip set up to present its story. Using this, it also helps with scene transitions and location swaps as well as switching the narratives from one side to the other in a fluid way. There’s a lot of charm in using this form of execution but also helps keep the tone in check of having something a little wild and fun but also comedic and cool. The cool punk elements are elevated because of the hard rock soundtrack that plays in its scenes especially the chase scenes or fighting scenes. As a fun little trivia, the school used as the base for Westsiders is also where Degrassi: The Next Generation was filmed, so a little throwback of familiarity as well for Munro Chambers who is the baddie in here.

Talking about the story itself, there is a gnawing feeling that a film called Riot Girls lacks a little of the girls element at first. It spends a lot of time in the first act following Jack and his kidnapping to the Westsiders area then it dives a lot on the Jeremy and how he runs his side of town with only snippets of Nat and Scratch as they make it there and little establishment bits for them. However, the story does converge itself as the girls reach their main objective, they show up much more frequently and the dynamic slowly switches over to their heroism and cooperation as they work together to successfully rescue Jack while surviving the more brutal Westsiders. Its a change in a pace because usually we have boys saving girls but in this situation, the girls are saving the boy especially as they go into a very male-dominant area with Jeremy and his jock buddies in the lead.

Despite the fact that there is a big storyline focused on the Westsiders, its not a huge problem because the entire cast delivers on their performances well. No doubt that Westsiders is strong because of Munro Chambers as Jeremy who also delivers on his bad guy roles. In this case, he shines quite a bit especially with the fact that Jeremy also delivers on showing that there is never a forever leadership in this world because kids will grow up to be adults and the inevitable will happen. Nat and Scratch is rightfully the stars of the show with  Madison Iseman and Paloma Kwiatkowski as the actresses behind it respectively. The friendship and relationship behind Nat and Scratch is a fairly positive one that doesn’t need to be explained. Its just there and its accepted for exactly what it is. They have each other’s backs and they love each other through these hard times and they are both empowering roles as they fight with their girl power against a band of boys. What is viewed as the less competent are actually the most competent and that goes not only for the Riot Girls Nat and Scratch but also their help Sony who is somewhat of the awkward yet comic relief. Not to mention Scratch and Nat have incredible style especially Scratch sporting a fantastic mohawk.

Its not like the movie is very heavy to begin with. Its both fast paced and a lot of action with some nice sarcastic humor to pair with it all. Riot Girls is a fun movie. Perhaps it betrays its title a little with having more boy times and a lot more male roles than females but Nat and Scratch are the most memorable characters in this no matter how little they may be, its all big moments which give their characters their own natural spotlight. Sure, its a flaw perhaps in the script but in terms of everything else from execution to soundtrack to pacing to the Riot Girls and the baddie, everything falls into place and works really well together.