So…I lied in the last double feature (HERE) about being the last Christmas lineup because we decided to watch another Alternate Christmas horror film on Shudder on Christmas day. Oops…haha! Pairing with this 80s slasher is this year’s uber cute movie, Pokemon Detective Pikachu. Lets check it out!!

The now-adult Ricky talks to a psychiatrist about how he became a murderer after his brother, Billy, died, which leads back to Mother Superior. – IMDB

I have never seen the first film so we could only hope that it would work out, seeing as Shudder only has Part 2 and not the first, it must work relatively well as a stand-alone. Starting from a sequel, no matter how much it doesn’t really need the first film’s knowledge and still is easy to follow is not too easy to accomplish but I wonder if some of the little questions of the character here would make more sense with knowledge of the first one.

Silent Night Deadly Night 2 is not too good. Maybe as a lets all sit around and make fun of it deal, it did have that entertainment purpose. The dialogue was pretty bad and then you pair it with the very exaggerated and trying really hard to be villainous acting of Eric Freeman with the furiously moving eyebrows and big eyes and that really did make it all the more ridiculous altogether. It didn’t matter that the movie went along to tell the story of how it began with the brother and that made more sense than how he had those triggers that made him vengeful because it wasn’t really about the brother more than it seemed like he also was triggered by certain elements that changed him. Some story elements didn’t make a ton of sense.

Overall, Silent Night Deadly Night 2 was pretty meh. I mean, it was pretty mockworthy fun as we sat around repeating the dialogue and the crazy eyebrows which sometimes were quite hard to do in general in its frequency. It did add a twist that we didn’t quite see at the end although how it was done is quite a mystery.

In a world where people collect Pokémon to do battle, a boy comes across an intelligent talking Pikachu who seeks to be a detective. – IMDB

I am going to be straightforward that I am not as big of a Pokemon fan as others. I know the basics and pop back into Pokemon Go every once in a while but I don’t think qualifies me as a “fan”. Detective Pikachu did some great promotional efforts though, with Ryan Reynolds as Pikachu and the trailers being so much fun to watch that it sold it to me right away. Plus, Pokemon is cute, REALLY cute so here we are…

Pokemon is Pokemon, its not meant to be deep or have some mega unexpected moment. In fact, keeping it simple might be its best execution and that is what this movie does. It blows you away with its comedy and the little bits of mystery and witty dialogue and just the sheer ability of being able to implement a variety of Pokemon types so well is quite the accomplishment. Its a fun time from start to finish. The ending did manage to squeeze in a little twist (about the father) that makes sense why something wasn’t done during the movie. Its a clever detail.

I didn’t have particularly any expectations for this one except to have a cute and fun time and I had that in spades. It was all that I had wanted and a lot more. Ryan Reynolds as the voice of Pikachu is brilliant. The dialogue packs in a lot of memorable moments. Plus, its all very witty and awesome. Sure, the danger of the whole situation and whatnot was pretty easy where they were going with the villain twist and who is behind the whole deal but I’m sure no one expected this one to be some deep story. Its simple and straightforward mystery and it ticks all the boxes of what you’d want from a Pokemon story. In fact, it does it a lot better than most video game inspired stories.

And for fun, here’s one of my favorite parts:

That’s it for this double feature!
Have you seen these two films?

We’re back with another unboxing! We’re at our last block for a little while.  We will be resubscribing eventually but for now, my husband and I have decided to de-clutter our house before getting any more of this (among many of the reasons). Arcade Block is a lot of fun but I’ll be having some fun stuff coming up still! 🙂 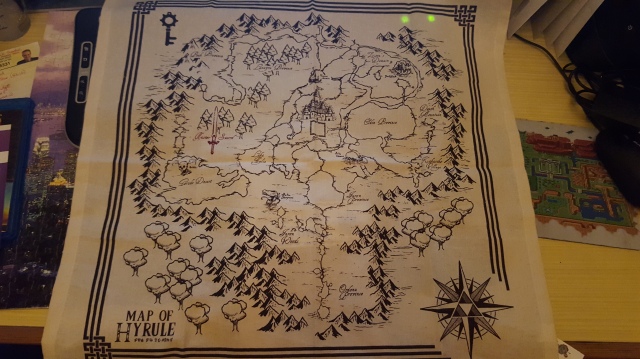 More Zelda gear! I swear, Arcade Block never ceases to remind me how I’m behind on Zelda games and just getting into this world. I’m not sure its my type of game though, to be honest. 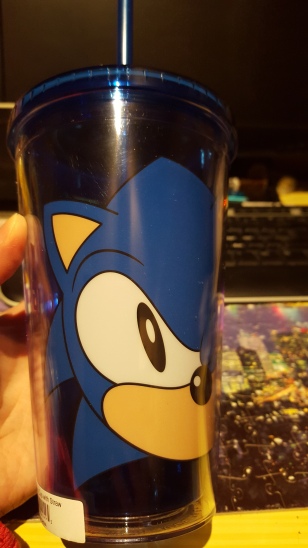 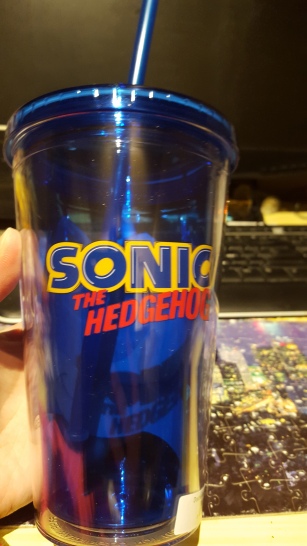 OMG! Hands down! My most excited moment in this unboxing! I love Sonic to pieces and I’ve always wanted a drinking up like this, you know, those double walled ones? Yeah, I love it! 🙂 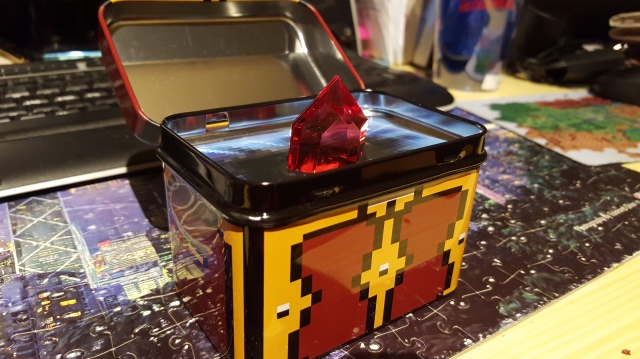 This is yet more Zelda but its a pretty cute box.  I can take out that cardboard and gem thing and use it to store little tidbits of office supplies or something 😉 Super adorable!

The first thing my husband did when he handed this over to me was that I could play it on my computer.  Deal is, my friend built my computer and at that time, it was for other purposes that didn’t require a graphics card and now that I’m getting back into gaming, I kind of need it but this one probably doesn’t and that is what he means.  I’m pretty intrigued at checking this out 😉

Isn’t this adorable? I’m not sure it beats my Pacman Ghosts one though but the idea of stacking it up is really awesome! I’ll figure out somewhere to put this 😉

As usual, we wrap things up with the T-Shirt.  This time, its the 20th anniversary for Pokemon. Its been 20 years? Wow! Now, I’m starting to feel a little old. There were also two other ones which were different patterns and was blue or orange. I think it looks really cool! 🙂

Overall…A great February Arcade Block as always.  My favorite goes to the lovely shirt design and the Sonic Drinking Cup. We got games and shakers and those are both fun and useful! In general, I can make use with everything here and that is what is always great about Arcade Blocks.  I’m definitely coming back in a few months after we get some more organizing in our house done.  Its been dragging on for too long and we need to figure some stuff out before committing to this again.  However, we do have another box subscription which is why this could be set aside for now.

There are some fun stuff planned coming up, either events or unboxing or whatnot! I promise you more fun times! Always remember that when I set something aside, I always have thought up some sort of alternative 🙂

What gear do you like in this Arcade Block?

Arcade Block finally made its appearance on our doorstep on Monday.  Its not too late so that’s good! We’re nearing the end of our subscription.  I think the next one is the last one.  We are debating whether to keep subscribing or not. Next unboxing, I’ll probably give an update on what we decide to do.  That aside, these Arcade Blocks have been rather awesome and really makes our day.

Anyone like to figure out Rubik’s Cube? I used to when I was young but nowadays, its not a frequent thing I do.  However, this puzzle cube is cute as a button with all 6 sides with different gaming icons. I love it! 🙂 Although its also the reason why I wouldn’t mess it up and rely on myself to put it back together.

I’ve previously mentioned that we’ve gotten a lot of stress ball-like sort of nerd gear.  Some of them are just hanging out on shelves and bookcases as decor.  This one is legitimately a useful stress ball.  I’m thinking of moving it into the basement with as a stress reliever when I’m raging over how I can’t pass a level in some platformer like Rayman or my most rage-worthy game, Trials Fusion. Maybe it’ll help me not want to toss the controller at the TV because I can never figure out how to do a bunny hop…

This is completely laugh out loud! I just love it! I’m still deciding where to put this! 😉  Where seems the most suitable? 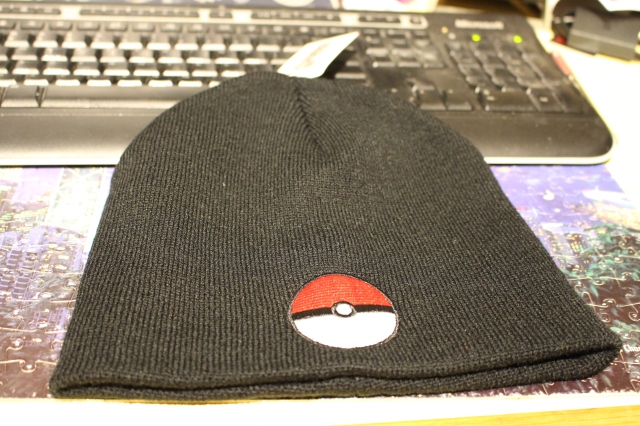 I’m not sure exactly who will wear this.  We’re not Pokemon fans.  Digimon was a thousand million times better to me. And we’re both not exactly beanie types.  I have a winter beanie hat but its warm and adorable so I love it.  Maybe I can use this to shovel snow on our next snowstorm 😉

I haven’t had the chance to play Mortal Kombat X yet but I’ve seen tons of gameplay videos on it and it looks great.  Scorpion is a classic character and its absolutely suitable that he’s the one we get in this block.  I’ve creatively opened up a new spot to put the figures 😉

If you’ve seen the Want to Play It Now post that I did with David over at That Moment In, you’ll know that while I’m not a really great combat game sort of person, Street Fighter is absolutely fantastic. Its a classic and I’m excited about Street Fighter V. This is a super cool T-Shirt with artwork from Stanley Lau (ArtGerm).  Some boxes got the Ken T-Shirt.  We got Ryu and well, I’m perfectly fine with it! 🙂

*There should be another unboxing for something completely different soon.  I’m just waiting for it to arrive*