Based a popular children’s storybook, Where the Wild Things are, this movie had me wondering if it would be good.  A part of me had a bit of doubts on the turnout and I ended up hearing a lot of mixed reviews, but I managed to get on Blu-ray at a bargain price. This gave me the opportunity to pick it up.  Plus, its adaptation from a book and I love to check out those flicks all the time! 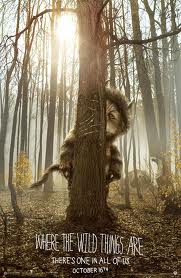 Max (Max Records) is a little boy who has a wild imagination.  He builds things and creates worlds for himself.  After being bullied by his sister Claire and her friends, and then being scolded by his mother (Catherine Keener) for a tantrum he pulled due to her paying more attention to her boyfriend, he runs away from home.  As he runs away in his wolf costume, his imagination takes him across the ocean to another land where there resides Wild Things. As he spies on them in the distance, one of the Wild Things Carol (James Gandolfini) was pulling a tantrum and destroying his family’s living spaces because he thought that KW (Lauren Ambrose) had left him.  When Max reveals himself, he eventually convinces them to not eat him because he had magical powers that could help them shield away sadness and keep everyone together, and they in turn make him their king.  However, as he leads them to build Carol’s dream home, he realizes that there are deeper issues between the Wild Things: Judith (Catherine O’Hara), Ira (Forest Whitaker), Alexander (Paul Dano), Douglas (Chris Cooper), The Bull (Michael Berry Jr.).  Sometimes, there are things that he can’t settle with just doing wild and rash decisions. 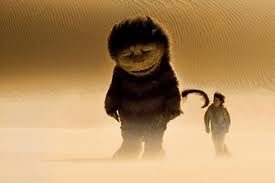 Right off, this movie confused me a bit.  It was set in a really dark tone.  There seemed to be a lot of random things going on and seeing as I don’t remember much about the original story book it was based on, I sat there look at Max doing his wild thing in his wolf creature and for a good part of the beginning, I started getting really depressed.  However, now that I think about it, I really think thats what it was trying to achieve because Max felt like one day he was going to fade away, his energy would fade away and he feared being left alone.   So he would pull his tantrums to try to remind his mom and his sister of his existence.  It was the way he chose to express himself. Running into the imaginary world was still a whole lot of dark tones visually everywhere, but there was a sense of freedom that was there.  Maybe freedom is not the right word, its more like this world brought him hope as he brought hope to the Wild Things.  At the same time, he got the care and attention that he wanted but at the same time, he learned that it wasn’t always fair, there was always going to be people who cared but didn’t always show it equally to everyone around them.  There are lessons that Max had to learn and in his little excursion to this imaginary world created in his mind, he sorted out those problems and he learned a little bit more.

This movie was a mix of human characters and the one focus was Max who is a real boy, but it matched it with puppeteers (from what I read).  The Wild Things creatures were super weird but yet they were done really well.  The characters were created in a way that as the movie moved on, the characters developed, especially Max and Carol and I grew to be attached to them.  For me, it was a very subconscious thing.  All I remember was thinking this was a super weird movie and just crazy depressing but by the end of the movie, I knew that I had laughed with them and the characters had touched my heart because in any imaginary world, we need to leave it eventually.  When Max had to leave to face his real life, I was crying pretty damn hard. I hadn’t realized I had gotten so drawn in until then.

I have never wanted to read a bedtime story book more after watching this.  I went searching up to see if I could find an ebook version but there wasn’t.  As much as this source material was meant for children, I’m not exactly sure this one is.  This one hits the dark and heavy area.  Its as much an adventure as it is a path to growing up.  Max comes to realizations through the characters that he’s imagined. This world and Wild Things was where he could be innocent and not worry about his problems.

However, I love movies with dark tones and this was adapted in a unique way, even though at parts it was depressing, it also was done beautifully.  A story where Max wanders into his imagination as a child and walks out of it grown up, simply by understanding it a little bit more, and that in itself is somewhat bittersweet.  It tugs at our heartstrings and brings in some beautiful and fun moments but also mixes in some heartbreaks.  Thats what it feels like to have to let your childhood innocence fade away a little.  I recommend this movie however with huge warning that you really have to be ready to accept that its not a children’s movie and you have to appreciate the dark tone that they use.