I know its a little early to take a break from the horror marathon and it’ll resume tomorrow. However, Battle of Ingredients is our monthly segment and our gathering just happened this past weekend. I promise it’ll be a short and sweet one and one that matches perfect with today which is Midautumn Festival, mostly referred to as Moon Festival!

A warm and maybe slightly cooler welcome from me and my cohost, Phoebe from Starry Traveler’s Road to the next Battle of Ingredients. Due to our love for the previous BBQ session and the weather being still decent, we decided to do another BBQ event.

This time, we took it to mostly basics. Mostly because we realized quite last minute that no actual plans were formulated. Also, we were both busy with personal life stuff so the final menu looked like this. 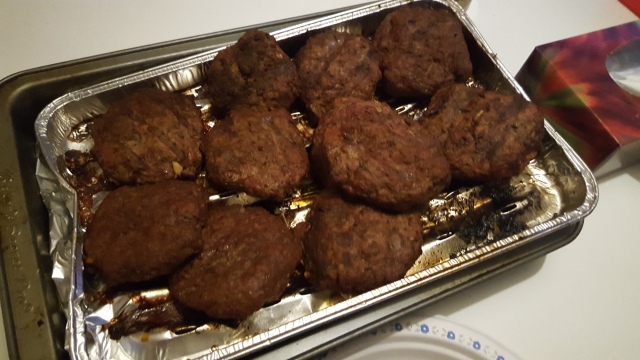 I made burger patties. Actually, because I was in a lot of pain that day, my husband being the champ that he is helped me make the patties. We got medium lean minced beef and used eggs and spices and he made the patties. He also took on the grill master role in the evening. So our event became a lot more relaxed than it usually would be. We bought the Italiano burger buns and got some cheese, gouda and lactose-free swiss. 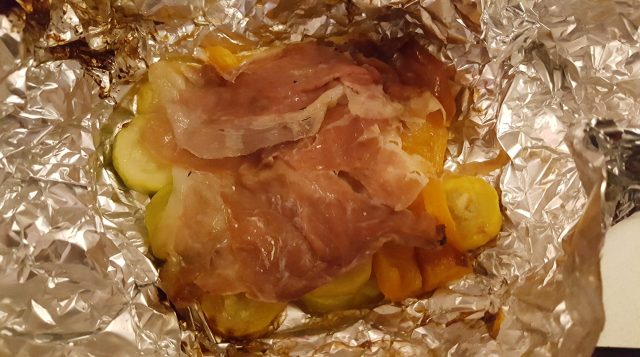 Phoebe pulled the stops this time and brought her take on the veggie foil pack that I had tried out last time. This time, her’s had bell peppers, zucchinis and also added in two to three slices of prosciutto. The prosciutto being on the top spread its salty flavors to the veggies, making it no necessary to spice it at all.

Phoebe also found on Pinterest a way to roast corn on the grill. It simply required snipping off the top part. It turned out perfect! She also brought on to try roasting eggplants on the grill as well. Most of us weren’t very into eggplants and didn’t normally cook them so in my opinion, they weren’t done too good. Definitely something to further into bettering our skills at or maybe its just better to cook them in another way.

Aside from that, this time was almost like a potluck as our friends also brought some chicken breast along with tzatzki sauce (not sure how you spell it).

We ended with our dessert.  Our friends,who is always responsible for beverages, brought the Pepito Rose Sangria and some light fruity coolers. While I forgot to take pictures of it, I brought some garden fruits like raspberries and a lot of ground cherries. Aside from that, we also had an early celebration of Moon Festival, or Midautumn Festival which most people know for eating moon cakes, a little chinese pastry with lotus paste normally. 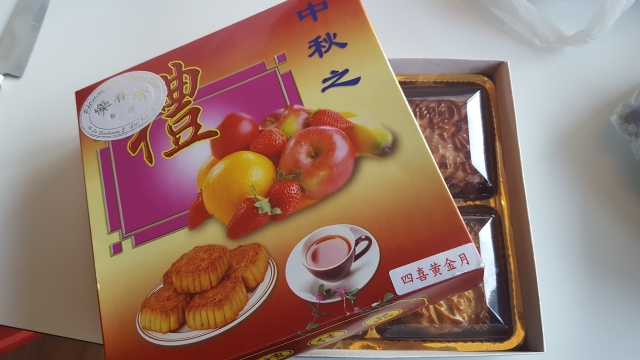 Phoebe found a pastry shop in Chinatown called La Patisserie Chow that makes their own moon cakes and we were interested to see how they were so she bought the box with their bestselling four flavors.

Our biggest issue was that each one wasn’t labelled. We easily could identify the white lotus paste one which was a win for both me and Phoebe. The nuts got an okay where it was good but not great. Then we have a mystery one which I personally suspect is the Golden Double Yolk Paste that my husband and our friend liked. Then there was one that unanimously was pretty bad. I’m guessing its the green bean paste but it wasn’t labelled so I don’t really know.

Chow Pastry Shop is pretty commendable to have their own moon cakes. Huge applause for that. However, its better to label the variety one way or another even if the ingredients are also labelled super vaguely. I think this one could be hit or miss. Its definitely not like the ones you’d buy from the big brands. Phoebe posed a good question about how we usually do eat from the big brands and maybe traditional moon cakes with any preservatives and in their natural state would taste more like this. Perhaps one time, I’ll be in Hong Kong where actually smaller bakeries also make moon cakes or I’ll attempt it myself and we’ll see.

That’s it for this Battle of Ingredients!
Thanks for joining us!
November might be skipped because our crew usually does the MTL a Table event.
However, we’ll find a festive return in December for the holidays!

Chinese New Year is just around the corner. Last weekend turned out to be pretty busy as well. On the mission to buy some flowers to decorate the house, as I usually do every year for Chinese New Year, my friend took me to the Cardinal Tea Room for lunch on the way. For those of you who don’t know, I love tea. Love it so much and obviously, seeing as I (used to) bake a lot (and would if I have more time), I love sweets and pastries and the likes. This cute little place seemed right up my alley.

Cardinal Tea Room is very welcoming. In fact, its almost like walking into another world. Its quaint and cute with lots of more antique sort of elegance to it. There’s old books in wooden bookcases and mirrors and old-fashioned lights. There’s a beautiful chandelier hanging in the centre of their two storey tea room and a piano near the stairs. The places are decorated with these green lights that we’d usually see at older libraries.

Nice presentation with their very beautiful plates along with delicious food makes this place very nice. While these are rather simple things, the sausage roll is really good for one. The apple tart was really nice. I’m personally not a huge fan of walnut and somehow apple and walnut seems like an odd combination, maybe pecans would be better. However, this tart did grow on me, maybe a hint of the cinnamon (I think) made it tasty. My friend had the blueberry scones which is made with some milk ingredients, cream I believe, so I didn’t get to try it and I wasn’t into sandwiches, but I believe it was good. However, I was impressed with the tea selection although I would have liked a better selection of Chinese tea but that isn’t their crowd probably.

Overall, Cardinal Tea Room is a lovely little tea and pastry restaurant. The service was good and the decor is cozy and charming. The food is pretty good and the tea selection is nice. Definitely somewhere I would like to go again.

Last Thursday was a big baking day.  I spent about 4 hours from 8pm-midnight spending quality time in the kitchen.  I finally made those Sugar Cookies with the dough I had made on Sunday and although the cookie cutters seemed to have vanished, that batch turned out rather nice as well.

Deciding to make Eclairs was a huge step.  I haven’t made anything like this before and most of the time when I get mixed up with whipping cream, it never turned out good.  So of course, at the same time, my best friend calls long distance and I had to ask for some help since my multitasking skills only go to a certain extent! Yes, my boyfriend.  I have to say though, he’s one great helper when it comes to these artsy recipes with whip cream.  Other than supervising and reading the quantities for the ingredients, he mixed  most of the recipes to have the right consistency to move on with the recipe.

Here is how it turned out after a night in the fridge to harden the chocolate coating:

I took this recipe from my baking book from the previous few recipes: Cookies, Biscuits & Bakes 500 by Catherine Atkinson.

1.  Preheat the oven to 400F.  Grease and line a baking sheet.  For the pastry, sift the flour and salt on to a sheet of baking parchment.

2. Melt the butter with the water in a pan, then bring to a rolling boil.  Remove from the heat, add all the flour and beat until combined.  Return to a low heat, beating until the mixture leaves the side of the pan and forms a ball.  Leave to cool for 2-3 mins.  Gradually beat in the eggs to make a smooth, shiny paste.

3. Spoon the pastry in to a piping (pastry) bag fitted with a 1in. plain nozzle.  Pipe 10cm/4in lengths on to the baking sheet.  Use a wet knife to cut off the pastry at the nozzle.  Bake for 25-30 minutes, until risen ad golden.

4. Make a slit along the side of each eclair to release the steam, lower the oven temperature to 350F and bake for 5 mins more.  Cool on a wire rack.

5. For the filling, whip the cream with the sugar and vanilla. Spoon into a piping bag and use to fill the eclairs.

6. Melt the Chocolate with 2 tbsp water in a heatproof bowl over a pan of simmering water. Remove from the heat and gradually stir in the butter.  Dip the top of each eclair in the chocolate. Leave to cool until set.

As always, the curse of lack of flour was here again.  Step 2 was extremely hard because by the time I got there.  The paste had already appeared after the heating stage, but when you add 2 eggs it because horribly liquid.  We ended adding another 3 tbsp of sifted flour and beating that in to make the smooth, shiny paste.  My boyfriend probably stood there for a good amount of time patiently beating it in to get it done.  So be careful of that stage.

Also, we didn’t have a pastry bag so we just used a ziploc bag and cut off the tip to about 1in .  As you can see, we didn’t have exactly 10cm.  There really wasn’t that much paste to make 12.

I will eventually revisit this recipe and hopefully it’ll work out a bit better, although my boyfriend ended up loving the end result a lot.  He said it tasted really delicious.  Definitely worth it to make again! I should be looking at making more pastries soon!