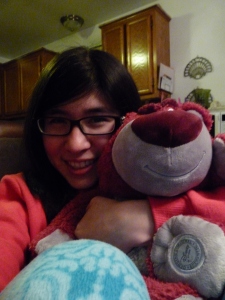 I made it home in time to watch the whole Oscars night last night.  I even had time to eat dinner and get all comfortable because I knew that it would end at midnight. Whenever I come back from Toronto, there’s always a decent amount of unpacking and I’ll definitely be having another food review and some cool finds that I have.  A little sneak peek would be here as I made some tea, sat down comfortably with one of my new additions and eventually my boyfriend did join me when the actual Oscars started!

I even got to see a bit of the preshow on the red carpet and the dresses and interviews.

I opened it midway right in time to see who was presenting and interviewing everyone.  Of course, I landed right around interviewing Sandra Bullock and she was just so elegant.  After that we have Anne Hathaway.  I don’t know about everyone else and I haven’t read any tabloids but my first impression was that it looked like a pink apron.  Definitely not a good choice in  my opinion but hey, she’s still a beautiful actress and I’m sure there are people who liked her choice.

Speaking of that, my favorite three dresses of the night has to go to these beautiful elegant women in no particular order:

For the record, if you haven’t been following me for too too long, you’d know that I only watched a small portion of the movies that were nominated but I think I follow a whole lot of movie blogs and in turn, it made me make a lot of good guesses.  I figured that Ang Lee would win Best Director and I guessed Anne Hathaway would win Best Supporting Actress (even if I still had a moment that she wouldn’t).  I figured that Daniel Day-Lewis had a really good chance at winning Best Actor but I didn’t know that this time broke the record of the first person to win 3 times best lead actor.  Now that is a huge accomplishment.  As for Best Actress going to Jennifer Lawrence, I really didn’t think she had a shot until I saw the snippets of the movies and thats when I really thought that she did have an equal chance at it.  Of course, her dress was bulky so down she fell as she was overjoyed and attempting to walk up the stairs.  Now Jennifer Lawrence is on the grid officially and I can see her with even more movies in the near future.

The biggest fight this year was probably Best Picture.  The last Oscars I watched was probably at least 7 years ago because I used to watch movies and the Oscars in totality with my dad.  It was something we bonded with.  I always remembered it having only 5 movies in the race but apparently now we’re at 9.  Talk about tough choices, right? I was surprised that Argo won.  I really was.  Lincoln had a lot going for it from what I’ve heard.  Deep down, anyone who knows me would know that I’d want Les Miserables to win but I also knew that the possibility was quite low because its not one that EVERYONE likes, it was more towards a certain group of people who preferred this sort of musical.  Argo won and I’m seriously happy for Ben Affleck among all of them.  He’s proven himself quite worthy in his whole career and he’s grown quite a bit into the director and producer that he is now.  I really look forward to seeing what his next project will be.  Definitely seeing some great things for him if he continues the way he does.

So now that we’ve looked at those big awards, I was super happy when Disney’s Paperman won Best Animated Short.  I had shared that video a few weeks ago on Twitter and it was just such a fun and cute movie.   I put in the video below just in case you didn’t get a chance to see it 🙂 And then, for Best Animated movie was Brave and believe it or not, I saw it! I actually wasn’t sure who would win for that one but I was sure that Pirates wouldn’t win (even if I did enjoy it quite a bit, you can see my review HERE).

Now on a more personal level, sitting down to watch the Oscars means a lot to me.  It included having memories of spending time with my father.  I wrote a deep personal post about moving on in December (you can check it out HERE if you’d like) related to it.  This year, I felt like since my blog was slowly getting in more reviews, it made lots of sense to sit down and watch the Oscars again.  I miss my dad of course and I think doing it made me move on a little bit more but you know, last night would be a night he would enjoy.  We had some James Bond songs and then on top of that, in the memoriam, that part really got me when Barbara Streisand came out and sang one of my dad’s absolute favorite songs.  That was the highlight of my evening. However, I can’t seem to find a video of that so maybe in a few days, we’ll have some better quality ones appearing in Youtube if you didn’t see it.

After seeing all those snippets, I just know that I have so much catching up to do now.  I’ll be working hard on that and hopefully this year, I’ll be a bit more on track with movie viewing, at the minimum try to catch the big ones.  It was a fun night for sure, and I’m definitely going to get more prepped for next year’s awards 🙂

What was your surprise win(s)? How about your favorite outfit? I couldn’t pinpoint my favorite speech, did you have one?