On the weekend, my boyfriend’s coworker lent him this flick In Time.  I’m personally not a huge fan of Justin Timberlake.  I’ve had that discussion back when I reviewed Bad Teacher .  Not impressed by him much.  However, I’m okay with Amanda Seyfried.  Plus, I’ve been intrigued by the concept of this movie. 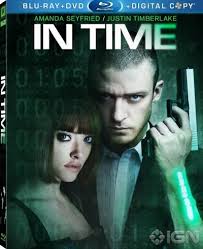 In the future, the population has been imprinted with a digital timer on their arms which activates the moment they turn 25.  They are destined to have eternal youth but when this clock starts, it is set to only countdown for 1 more year.  Everything will be paid and earned by the minutes and hours and rarely years in their life.  Your wealth is equivalent to the amount of time you own remaining in your life.  Will Salas (Justin Timberlake) is a normal guy who works in a low job and lives literally by the day with his mom who is in the same situation. When he saves a fed up rich guy called Henry Hamilton (Matt Bomer) with over a century on his clock who comes into this local bar, Will spots trouble.  He saves Henry from the bad guys in the area led by Fortis (Alex Pettyfer) who spends his life taking time from other people.  When he wakes up, he realizes that not only did Henry give him all his time but that Henry had timed out himself which causes Will to be tracked down by the Timekeeper Raymond Leon (Cillian Murphy) who accuses him of murder.  In the course of events, he meets a rich man who owns the time lending in all the area Weisz and his beautiful daughter Sylvia and eventually takes her as hostage as they run away.

I hold true that the concept of this movie was pretty cool.  Using time as the center of replacing wealth because most of us know the saying time equals money, right? To apply that as the tool for how people survive seems to make sense and to use it in a world that is divided into time zones and in the most richest time zone called New Greenwich, we know that the standards of living are higher as crossing into that zone would be many times higher than the previous one. I bought the premise of the setting that this story was set in.

However, this movie was quite average.  It was enjoyable in the beginning when trying to understand what was going on and in the last bit leading to the ending. The middle gets a bit slow for my taste.  How do I know? Because when a movie doesn’t captivate me, I start walking around the kitchen and opening the cupboards and fridge trying to find something to eat.  Its just a habit I have.  Eventually, it just felt like the movie wasn’t going to end.  I think what happened  is that it became (too) predictable. BUT…let me just add I really enjoyed how it ended. 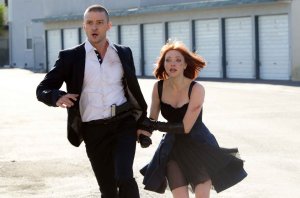 Our main actor Justin Timberlake really didn’t do too much for me. He definitely was better than in Bad Teacher. At least in this one he has a respectable character. One that wants to change the world he is in so that no one is immortal but to achieve some sort of equality and take down the walls separating everyone from the differences of time in the time zones.  Amanda Seyfried was a bit more interesting because she learned and changed as the situation progresses.  But something didn`t make me connect too much with her. Don’t get me wrong…she has been in many movies that I enjoy and she was alright in this one.  Was it my favorite role from her…probably not though.

As much as the main characters didn’t really connect with the movie itself much, I found that the supporting cast was quite good.  For one, I really liked Olivia Wilde.  She was very beautiful and pretty cool for the time that she had in the movie.  Another actor I’d like to mention is Cillian Murphy.  This guy is a pretty kick ass actor in my book.  He’s done some pretty awesome movies like 28 Days Later and Nolan`s Batman.  In this one, I actually thought he made this movie a lot better.  His character was interesting in its own (and frustrating at times) but then he really brought more action and spark to the flick.  He was probably the favorite part of this for me. 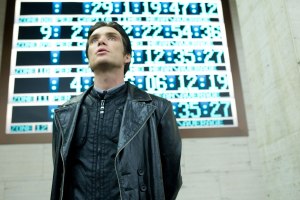 Overall, this is an average movie.  I would actually recommend it based on the interesting premise that it chooses.  Its a pretty good flick to just sit back and watch when there isn’t anything else on or whatnot.  It has some good performances and between some slower parts in the middle, it does also have some fun parts here and there.

Have you seen this? What do you think of the premise of this movie using Time is Money as the concept? How about the actors and actresses here? Anyone of them have any particular roles you enjoy?