After going to bed early on Tuesday night and having a relaxing morning to check out of our hotel in South Portland, we had a few things planned for the day as we made our way over to Bangor to check into our second hotel.

Our first stop was to the Portland Waterfront.  We never made it to the actual waterfront I think but from where we walked, it was pretty nice 🙂 Here’s some of the stuff around that area! 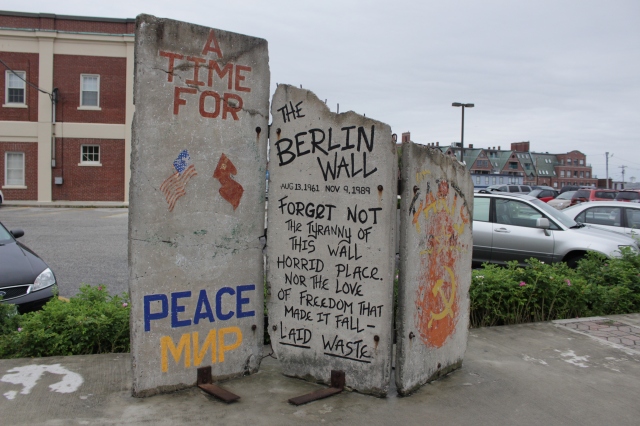 By the waterside/harbor, I think it was full of boats for the tours

Beautiful flowers 🙂 Stood out in the gloomy skies

We didn’t put a lot of money in the parking meter so before we knew it, we had to run back to the car and not get a ticket.  Along the way, I took the opportunity to stop at Bam Bam Bakery to get myself a tea.  Tea does for me what coffee does for others.  I also asked randomly if they have dairy free baked goods and GUESS WHAT!! THEY DID ! 🙂

I got myself a delicious Earl Grey cupcake with lemon frosting! 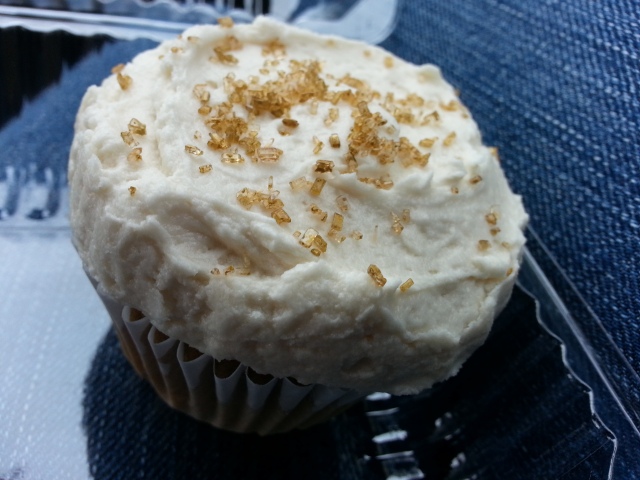 I ate it a bit later in the day, after lunch and it was delicious! 🙂

After a few phone calls back and forth, we finally met up with fellow blogger Jonathan Hilton from Life of Jonathan. We chatted in the middle of nowhere for almost 2 hours until it started to rain so we went to have lunch in Bath, Maine. After some hectic find for parking, we ended up going to eat at a restaurant called Beale Street Barbecue.

Here’s what we had:

My Dish: 1/4 Chicken with sides of fries and mashed sweet potatoes

My boyfriend: Italian Sub with fries

This restaurant was pretty good. I really enjoyed my chicken and it was all done pretty good.  My boyfriend also loved his Italian Sub.

Jonathan is an amazing person who is now not only a blogging friend but an actual friend! He’s super nice and so insightful. I learned a lot from the stories he told about his job and life and all that.  He is definitely an inspirational person! 🙂 Before we left, we had to take a picture together!

I know I’m short.  5’4 to his 6 feet (I think)! Haha! Some of you may have seen his version of this same picture over at his site which I did share on Facebook. I know a few of you are my Facebook friends.  Doesn’t matter! Its the same one and he wrote a post about it where you can find right HERE! While you are there, you should check out some inspirational posts that he has there also 🙂

He did give us a little advice to take the longer Scenic drive to Bangor.  We took his advice and on our drive we went through some pretty cool towns.  I was fumbling with everything so I didn’t really take any decent pictures.  We did manage to stop to rearrange some things in the trunk and search out stuff, bathroom breaks, that sort of thing.

My supposed “trespassing” through a parking lot of a lodge inn…

If I did trespass, I’m sorry! *blush* but I’m a tourist and I don’t even remember the exact location of where this was…

Our second stop was a tad closer to Bangor and I realized that I had stuffed the hotel booking confirmation/itinerary in the luggage so I had to dig it out.  Well, my boyfriend did a bit of that while I went off to take pictures…haha!

2nd stop on the way to Bangor

Of course, my instructions are always vague so I came back to dig it out myself. Off we went after that was settled and we went off to our hotel! Let me just say, parts of it was quite scenic and nice.  This route passes through the food truck for Red’s Eats for lobster rolls.  I read about it in the travel guide but didn’t go because I didn’t want to taunt my stomach too much after the previous day’s episode.  If you are interested, thats just a suggestion I wanted to throw in.

This hotel that we booked in Bangor was out of the world.  It was so new, parts of it still smelled like fresh paint.  We took a normal King size bed room and look at the size of it! 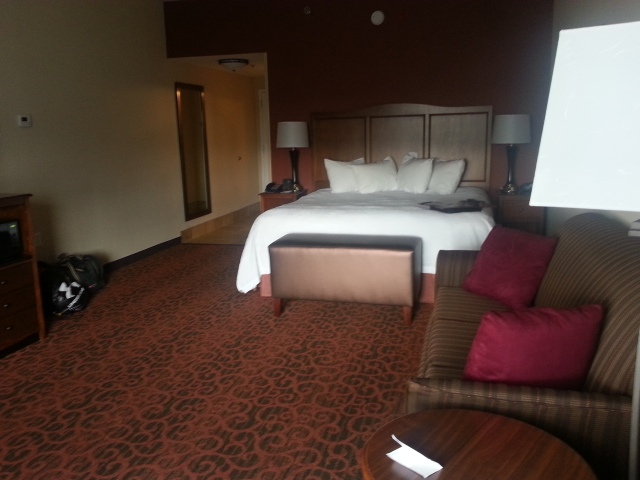 The *almost* complete view of the room

I was pretty much at the far edge flat at the window when I took this picture.  The only things not in the picture is on the far left corner was the desk and then right in front of that sofa was an average size LCD TV.  Look at the amount of space there.  I swear, if I could still do cartwheels I would’ve done it.  Plus, everything was so nice. I didn’t take a picture of the bathroom but it was crazy huge also.  If you decide to stay in Bangor, this is a pretty affordable and awesome choice! 🙂

We rested a bit at the hotel and then went off to explore Target! WOOHOO! I love Target and also went to do some spontaneous shopping at the nearby mall until we felt hungry and went to eat at Olive Garden!  My boyfriend hadn’t tasted the awesomeness of it yet 🙂  I had Salmon and my boyfriend had pasta and garlic bread along with some delicious Minestrone Soup for both of us.  I forgot my phone and my tablet took crazy dark pictures of our food except for the drinks! 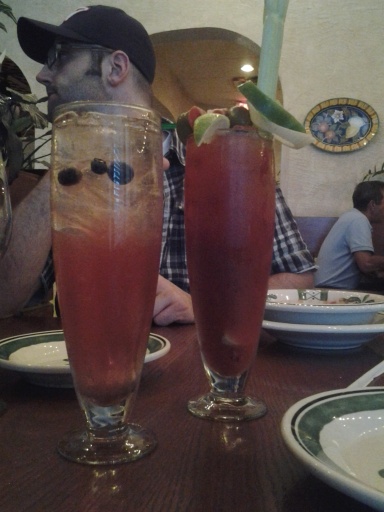 Olive Garden Drinks! Bloody Mary and Sparkling Wine with Blueberry Pomegrenate (or something like that)

My boyfriend was trying to avoid the camera but hey, thats the life of eating with me.  The meal was quite delicious but I was less fun that I had expected so I couldn’t finish part of my meal.  Maybe if I didn’t eat that whole breadstick and just had a half.  It was so tempting though! 😉

Day 3 was pretty eventful and fun! It didn’t seem like we really did much but we did see a lot of scenery and had some awesome meals and met an amazing friend! Overall, it was a fantastic day! 🙂

DAY 4 was the one of the planned events I was looking forward to the most!  Remember to check back tomorrow to check it out! 🙂

I have heard of this place a lot but I’ve never been before.  Seeing as we were right next to it, it was out destination for dinner.  We had an early dinner and thank goodness we did because our wait was 20-25 minutes whereas people coming in 10 minutes after us were at 40-45 minutes or something like that.  It was crazy intense.  The first thing we know when we walk into this Italian restaurant Olive Garden is a whiff of cheese in the air.

They had a very good deal for 2 for $25 and seeing as we were 4 girls.  We took two of those.  The waitress we had was extremely nice.  Now onto the food.  We each had unlimited soup or salad and breadsticks.  Although only one of us ordered another soup. However, I don`t remember the soup names but I do remember the commentary.

In the soups, I had the minestrone.  It was delicious.  Also inspired me to want to add a bit of pasta and beans next time I make my own.  The texture was very nice because of it and it wasn`t too salty. 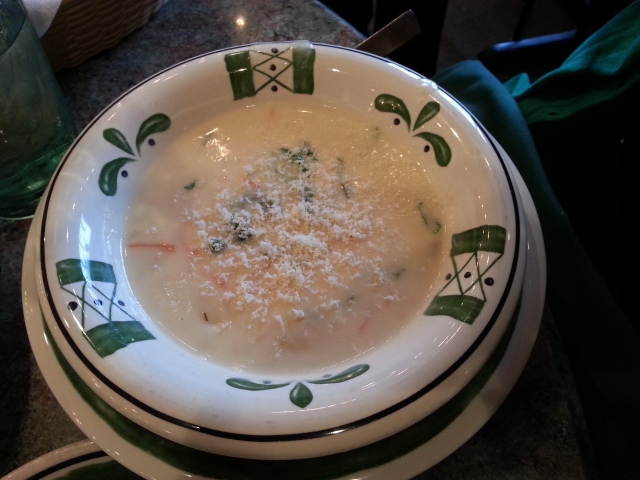 This is a cream based soup so I couldn`t get it but I don`t remember the exact name.  Two of the girls got this one. One liked it and the other said it was a tad too salty.  Just a taste preference I guess.

Next up, we had the breadsticks.  These are also unlimited. We could get as many as we like. We didn`t though, because we didn`t want to overdo it and not be able to eat our own meals.  I liked the taste of it a lot. I wouldn`t eat to much of it though as it started feeling like it was getting a little salt after a while.  It went great with the soup though 🙂

Now for the appetizer! I only have our own because the sisters chose to share dessert instead.

The fried calamari was the part I ate since I seem to have trouble digesting raw veggies.  Weird, I know.  However, it did well for us to share.  The fried calamari was absolutely tasty and possibly one of the best I have had.  My friend also enjoyed the bruchetta. She didn`t say much about it but there was no criticism either.  I take that as a good thing 😉

Sorry for the blurry pictures. I forgot to mention that I was using my new smartphone. Woohoo! I`m not too good at it so I`m still working on getting it right.  This was my main dish: Venetian Apricot Chicken.  Did I tell you how much I like apricot? This chicken was tender and the glaze was different and totally awesome.  I love it!

My friend got the Fettuccine Alfredo for her main dish.  It was a really big plate and she finished probably 3/4s of the meal before she had to give up.

One of the sisters got the same as me while the other one, who is vegetarian chose this Five Cheese Ziti al Forno.  She ate probably a quarter of it and said that she was full.  She felt it was heavy probably because of the cheese.  She ended working hard and finishing a bit more than half, I think.

Next up, we have the desserts! Everyone`s favorite part, right?

Did I tell you one of the other girls is a baker too? Anyways, she is and she was eating most of it since her sister almost couldn`t stuff any more in after her pasta.  She said that it was average.  However, the tiramisu tasted better than the chocolate mousse.

I was really pleased with the service and the food at Olive Garden. It was super fun to eat at and everyone enjoyed their meals a lot! 🙂 On top of that, their menus showed the calorie counts on the side.  Although calories aren`t really what I had on my mind but seeing the choice to take something healthier really makes it better appeal to the public (in this case, me).

Have you eaten at Olive Garden? What did you like? What do you like to eat at italian restaurants?