Before we start this review, perhaps a few things need to laid out. If you watched my What’s Up, you will know that I already talked about this. While I’ve seen Ocean’s 11 and that trilogy (or maybe I haven’t seen Ocean’s 13 because I can’t remember), I honestly can’t remember a whole lot of what goes on except that Ocean’s 11 was pretty fun and had some big stars in it. With that said, Ocean’s 8 is kind of a new slate for me which works because it turns out that its a standalone story with a few nods in terms of characters and such. I usually don’t go to watch films like this at theatres but one of my good friends took me so who am I to argue with time with friends, right? Plus, would you look at the cast here? A ton of my faves all in one movie sounds like a ton of fun. Let’s hope it is! 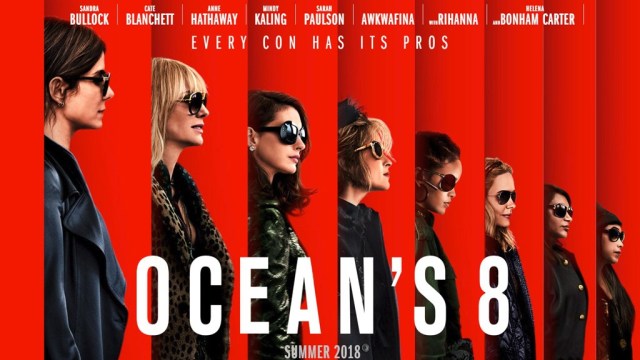 Judging from my above comment, you could say that I enjoyed the Ocean’s Eleven and Twelve heist movies but then I’m not exactly remembering a ton from it so maybe not exactly my favorite movies ever. With that said, my appreciation for Ocean’s 8 draws exactly from the little things I remember from the male centric ones and that is the cast. Ocean’s 8 hook is its fantastic ladies. Everyone delivers in absolutely glory. 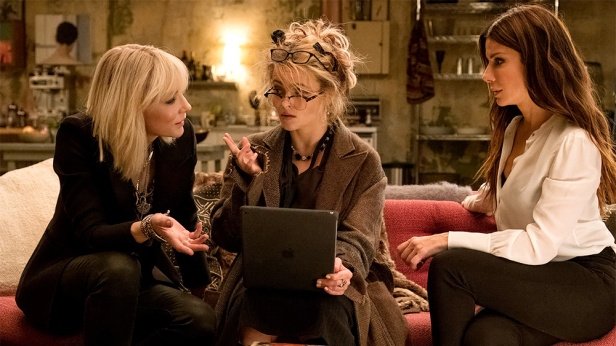 The movie starts off with quite a few comedic moments as we see Debbie Ocean, played by Sandra Bullock be released from prison. There is this sarcastic and fun humor as Debbie and Lou (Cate Blanchett) go to find the other members for this epic heist she has in mind which leads to some comedic moments of knowing a little more about each of them as we get a glimpse of their life and their pressures but also their fortes that make them an asset to the group. Rhianna, Mindy Kaling, Helena Bonham Carter, Sara Paulson and Awkwafina as well as Anne Hathaway all fall into place for this plan to work out. And they all deliver so well. I have only heard of Awkwafina and haven’t seen Mindy Kaling before so I don’t know what to say much but Rhianna has grown so much as an actress. I am not a big fan of her music but she gets involved in some great movies now. Helena Bonham Carter also has some awkward movies before but in this one, she fits well in it. At the same time, I am telling you that I have a huge lady crush on Sara Paulson. She always delivers so well and I just love her. 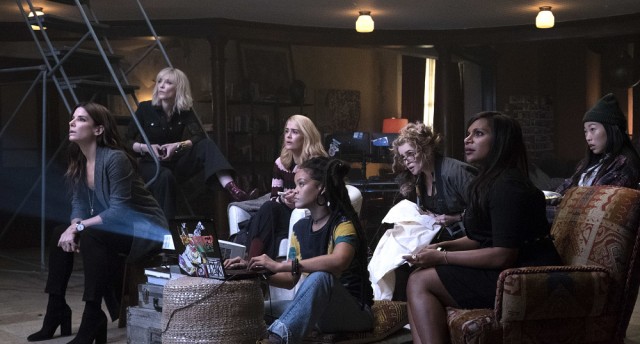 In terms of the heist, I have always been a fan on seeing the movie magic happen because it is both entertaining and fun when it is thought out well and puts all the pieces into motion and there is always a twist and some tension. With Ocean’s 8, it delivers a lot of these fronts. While the setup had a lot of comedic moments, the heist actually had a fair amount of tensions. The heist also stands out in not only watching the plan roll out with whichever snag it hits because what movie would it be without (I guess some might say that its a tad formulaic) but also these ladies and their beautiful outfits. Its impossible to not feel this beauty and intelligence in one package as well as triumph. These ladies are what makes the heist happen and I think the biggest accomplishment is that we see them as a unit because of their differences and connect to them so we care about what happens.

These movies are all about the star power and while these all female casts cause so much talk, I’d like to stray away and just talk about how fantastic these star-powered casts bring to the table. Hence, the long chat about. However, Ocean’s Eight did bring in some humor from the men as well. For one, we have Richard Armitage which I haven’t seen in anything for a long time. The man is super charming and well, he got what he deserves. Let’s just put it that way. While small, it still had its significance. We had  cameo of sorts by James Corden and I’m telling you that lately I’ve started watching those Carpool Karaoke videos and this guy is pretty hilarious and I think he pulls off some great comedic moments as well here.

Overall, Ocean’s Eight is a fun and entertaining time. There’s a lot of comedic moments and my fave sarcastic humor. There is a slew of beautiful and talented cast here who work so well with each other. That is the true star plus the outfits are so pretty and lovely. The heist itself works fairly well and had its tense moments. There’s a lot of like about Ocean’s Eight and while I might not remember from Ocean’s Eleven in terms of specifics, I remember that fun feeling I had when the film ended and we get the same thing here.