Instead of boring you with my little details, this time, I spaced it out deliberately to two weeks.  I had nothing to report back with so it just makes sense to get this in now with a little bit more activities. This time around, its slowed down quite a bit.  I’m trying to clear up my schedule a little and just relax, catch up on some sleep and find back some energy.  Plus, I need to get ahead with the blog so its all a work in progress. We are also trying to get the house in order and looking nice enough for any relatives that come and want to visit 😉

As mentioned in the last Weekly Adventures, we went on our second visit and I met even more of my fiance’s friends.  Crazy stuff, eh? This wedding, I tell you. Its making life colorful.  And I mean, his friends are really colorful like their personality and their thoughts are hard to catch up with.

Anyways, I finally had the poutine at Poutineville.  Its not so much real as I wasn’t sure about the gravy so they suggested the Italian meat sauce instead. Its kind of what we call Michigan-style (instead of hot dogs, we have fries and cheese).

Then, like the last time, a visit to Chocolate Favoris. 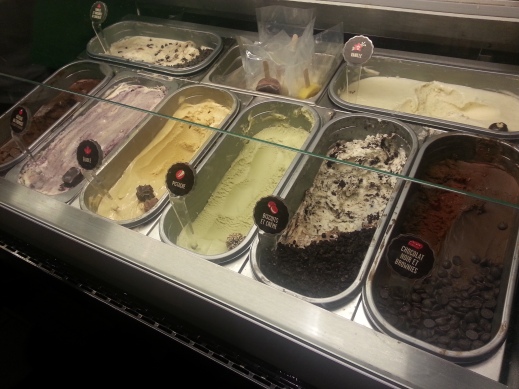 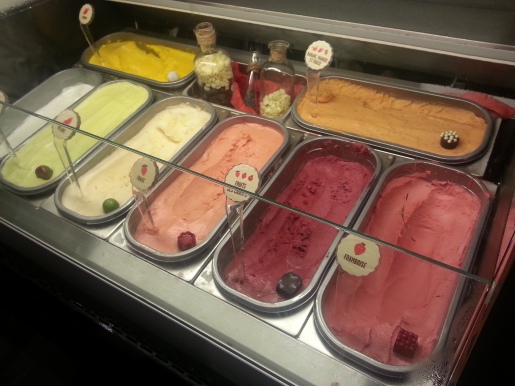 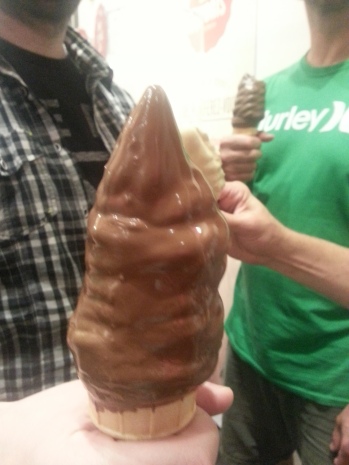 Its turning into something of a tradition.  I just might want to refrain from Poutineville for the next few weeks until after the big day. So that, all my hard work is not put to waste, right?

Last weekend, Nike Running app sent me an email telling me that on Saturday, a run that we did would give us the chance to have a Nike Re-run video.  Now, that sounds awesome and what’s great about having this blog is I love trying out new little things.  So, I got in an afternoon run on Saturday even though I was so not feeling like it.  But I did it and kept to my workout goals. I was thinking that maybe I wouldn’t get it because the run wasn’t all that great.  My time was a little meh. But on Sunday, I ended up getting the email prompt to get the video.  We got to choose the time log and pick whichever one.  My routes are more or less the same.  It varies in direction, side of the street or going through the park or whatever small streets.  I actually need to map out a new path to explore the other side of the new neighborhood I moved in.  Still, here is what I yield.

That is my fastest time I’ve done so far. I haven’t quite beat that time yet as an average.

Oh right, and I run against traffic because it feels safer for me and the lights don’t change when I plan on crossing the road or whatever.  I just like to run with as little interruptions as possible. On a side note, a few days later, I ran my fastest km…but still, this is my best average pace.  Lets hope it improves 😉

If anyone is interested in seeing the new series Quantico, they have been shooting in Old Montreal right in front of the old Royal Bank building. They had done filming on and off for 2-3 weeks at least.  It looks really impressive and my guess is that its going to be the series headquarters or something.  The series already has me intrigued.  Its right up my alley of what I usually watch for TV series and with it being filmed so nearby, it has me even more interested 🙂

We bought a voucher for a visit to this garden at l’ile d’Orleans a while back and its edging near expiry and we even missed the peak season to see the lavender gardens but we did buy it so we took a little day trip out to l’ile d’Orleans and visited a rather green garden 😉  I apologize but I only have my fiance’s pictures.  My pictures haven’t quite made it in the computer yet. However, I will be doing a full post on this if the pictures do turn out good.  I think I did some artsy stuff playing with the focus and whatnot. Not sure how it turned out. 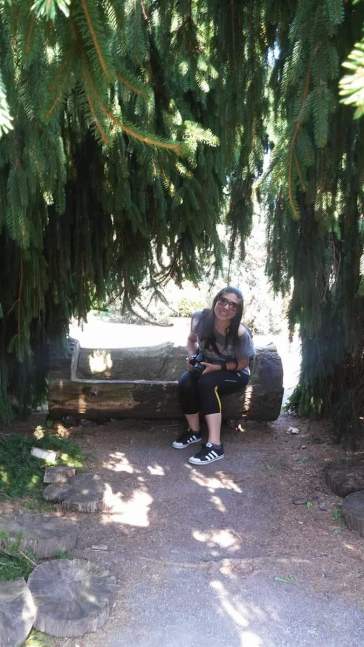 L’ile d’Orleans in summer is definitely different from winter.  It was full of people.  We did end up stopping at a newly opened La Nougaterie which is a place that I love which makes amazing soft nougats.  Apparently, they just moved to this location for two weeks and I caught it completely spontaneously.  We bought some little nougats and had some tasting.  If you haven’t tasted these nougats, you have to.  I look forward to getting it at the arts and crafts show for their Christmas flavored one.  Its like heaven in my mouth.

The last stop we made before we left was at Cassis Mona et Filles which is a winery that focuses on blackcurrant wines and liqueurs.  They have a really awesome recipe using one of their Fruité liqueur and the syrup based one along with club soda and fruits that makes THE BEST sangria I’ve ever tasted. We, of course, got that. They also sell some more dry wines like their Port.  I almost couldn’t swallow that one because it was rather dry.

Its almost time to close the gardens but we had a surge of heat wave and my plants are all confused.  Its good though.  We’re getting our big batch of strawberries and raspberries.  I’m considering to get a blueberry plant for next year.  I have a bit of space next to all these berries but it might not work so well because sun doesn’t hit that corner as much.  Anyways, next year’s projects aren’t anything to discuss now.  Look at those strawberries and raspberries 🙂

Confused plant doesn’t get any more than my clematis.  It has the hardest time staying alive in that spot.  I was starting to think about moving it again but didn’t know where just yet.  Then the heat wave hit and its having a ton of buds.  I sure hope the weather holds up so that it can bloom.  I haven’t seen one flower bloom on it yet.  Better late than never, right? 😉

Finally, we are seeing signs of the fall chrysanthemums coming out.  Its budding and about to bloom.  The big one is from the previous owners and my little ones last year, only one survived but its more than enough with whats there now since the marigolds are still blooming. 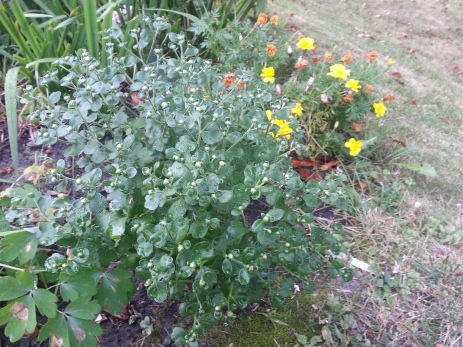 That’s it for this time’s Weekly Adventures! Short and sweet! 🙂
Happy Friday, my lovelies! Enjoy your weekend!

A few weeks ago, I downloaded this app onto my phone and I’ve been trying to figure out how to make it work.  Apparently, connecting to Facebook didn’t work so I just signed up for new account and voila, the Nike Training Club app worked.

Earlier this week, I started setting up my Nike+ account and decided to choose which program to use and I chose “Get Toned”.  It has been what I’ve been working on for the past while so after consulting with my boyfriend, he agreed it was what I should be doing also.  After choosing that one, the app set me up with 4 workouts scheduled for Tuesday, Wednesday, Thursday and Saturday for 4 weeks!

I figured instead of having to figure out what to do spontaneously, which is what I do and it sometimes kills my motivation, I decided to give it a shot. I jotted down in my notebook each of the workouts since I’m not all fancy and able to do lovely pics (which I should learn to do).  I just hope you can read my writing.

First workout up is Tuesday’s 30 minute workout called Kickin’ It! 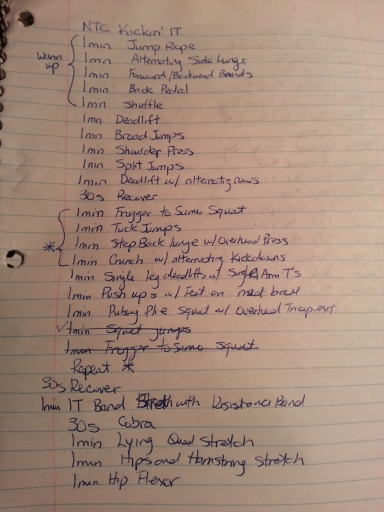 Sorry for the mistake there.  That 1 min Squat Jumps is supposed to be there. And the scribble in the bottom is “IT Band Stretch with Resistance Band”. Now for the actual workout, Kickin’ It was pretty good.  it was a great to really feel my heart rate.  Whats awesome about each of this and the following ones (except yoga maybe) is that there are always warm-up and end with some form of stretching.  It works the full body so it feels great! 🙂

Wednesday is when I started to get how this program worked a bit more and I realized that this app is pretty cool because you can get a short demo video of how to do the move which is always helpful especially for dynamic yoga and I’m a mega beginner.

The world of dynamic yoga is pretty crazy. The ending of this was intense especially with the different forms of side planks. I was pretty much screaming at the app to relieve some pain.  It was intense. Still, hating it just means it was targeting my weaknesses and with time, it’ll get better.  The one that was really challenging is crow pose.  That one will take a lot of practice.

Thursday brought on the 45 minutes workout and this was a mega sweat session called Stinger.

The sweat session was really in the length and the repeat of the sequence for 3 times. Plus, a lot of it was also that it was a lot of new moves that I’ve never done before so my body had to adapt to that.  By the third round, my body was tired but more fluent with the moves.

I was so happy to take Friday off and then last night, I did Saturday’s workout Flex Machine (my boyfriend laughed the name). 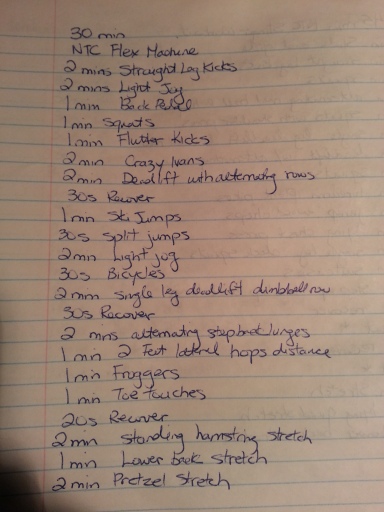 THE most intense workout of this week had to be this one.  It had to do a lot with the middle part with lunges, lateral hops and froggers.  I hate froggers with a passion because I have zero endurance with this.  On top of that, with all the energy zapped out of me, I had to do toe touches when I barely could keep my legs upright, much less push through to do toe touches.

I have to say it felt great to get back to some intense workout weeks.  I love doing the 4 times a week workout schedules.  I do intend to keep up with this for their full program so it should carry on pretty much till  Week 51 and then for the last week for this weekly workout sessions, I’ll figure out something to somewhat celebrate the one year mark 🙂

I don’t like to advertise or anything on my site but I have to say that I’m pretty impressed with Nike Training App, especially since its free and it pretty much has a instructor that calls out the time and tells you when to change your workout and it takes into account the getting equipment and getting into place before moving onto the next exercise.  Its pretty well thought out and I’ve learned a lot of new moves for warm-up, stretches and the actual exercises.  Lets see if it’ll actually tone my body just a little while I adjust back to eating well again.

Also, if you’d like to try the workouts and you can’t read my writing, just tell me.  I’ll tell you what it says.  I don’t have the best handwriting…

Have you tried Nike Training App? Any other apps you know good for working out?