Whether you are new here or not, I guess I’d like to make sure that before you start this review, you should know that the Resident Evil franchise (as low rated as it is) is one that holds a pretty special place in my heart. While I’m not a huge fan of the second movie in particular, I still think there’s a lot to like in all its cheesy dialogue and over the top action. Plus, Mila Jovovich has made an iconic badass lady with Alice.

Alice returns to where the nightmare began: The Hive in Raccoon City, where the Umbrella Corporation is gathering its forces for a final strike against the only remaining survivors of the apocalypse. – IMDB

The Resident Evil franchise has gone a long way and has really shed its skin from the survival horror genre that the first movie was about when it was based on the video game with the same name. In many ways, Resident Evil: The Final Chapter being released almost at the same time as the Resident Evil 7: Biohazard game being released seems like a really good movie. Although drastically different in story, both of them somehow turn back a little as they head back into their roots. We’re not here to talk about video games so I’ll put Resident Evil 7: biohazard aside and talk about Resident Evil: The Final Chapter, the sixth movie in the franchise and also the wrap-up. If you’ve been following these movies like I have, Resident Evil was a survival horror. It introduced the AI at The Hive and Raccoon City, showed us Alice and her super soldier ways and a bit of her back story, it showed the effects of the airborne virus that attacked The Hive and turned everyone and the immediate aftermath. The wasteland that we see is fantastic. That was the events of ten years ago, Resident Evil: The Final Chapter makes the effort to cover whats happened over the years as it starts. One of the good moves to not only remind the audience of whats happened for those who have visited this franchise before but also help generally understand the situation they are all in and where this story is going in this final instalment.

Resident Evil: The Final Chapter doesn’t only go back to its roots as a survival horror. In fact, maybe some might argue that it still is very much about action. I do agree with that but the balance of building the atmosphere of the movie itself and pulling it back towards the story it started in the first movie gives it a good wrap-up. We end things where we begin and in memory of many things. Whether you will find the finale surprising (in some ways, like I did) or predictable, the trip there is a good one. Going back through the familiar tunnels (for old viewers) or the dark tunnels (for the new) create a feeling of dread and danger. The cast emits that feeling and we know that the control isn’t really in their field because we get both sides of the story as Alice and the team she meets who Claire (Ali Larter) is with. Her team is a strong one fortified mostly by their reinforced tower from the undead especially as the main villain of the story approaches, a somehow alive Dr. Isaacs who is the partial owner of Umbrella Corporation who is the person responsible for the world apocalypse, comes with hordes of undead and big guns and giant tanks to put an end to Alice’s rebellion. 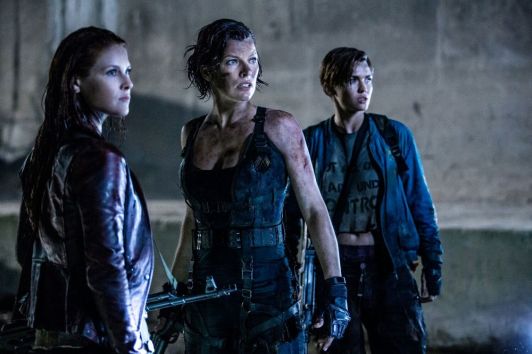 Before we talk about our villain, lets get back to our group here that assists Alice. Claire is a familiar face and she stays equally as competent. Her group that she’s with is made up of a few key characters that make it out to infiltrate The Hive. Their actual leader, Doc (Eoin Macken), Razor (Fraser James), Christian (William Levy), and Abigail (Ruby Rose). Ruby Rose seems to be hitting a ton of films in the beginning wave of movies and I’m pretty happy to see that. I’ve expressed how much I like her in both TV Binge of Orange is the New Black and the more recent xXx: The Return of Xander Cage. She is very unique, appearance-wise and gives off a really cool vibe. I liked her character quite a bit. In fact this team altogether is very competent in combat and coordination. One of the best scenes have to go to their tower defense moment against Dr. Isaacs.

The villain in The Final Chapter is no doubt Dr. Isaacs. Overcome with greed and whatever big ideas we have as we learn more about what happened, he is a villain that we thought had died but has come back to haunt us. However, nothing surprises us anymore in Resident Evil, especially when we’ve gone through stories of clones before. Faced with a restraint on the actual end of the world to wipe out even if the remaining few survivors, Alice fights to stop Dr. Isaacs. He is a strong villain who has actual fight in him and also a very deadly goal. Aside from him, there is another familiar face in Wesker, his minion in some ways who we face only behind his commands to the Red Queen in defense of The Hive. Then of course, we have the Red Queen, who was a huge part to what made the first Resident Evil rather eerie. What makes The Hive dangerous is not only the return of Red Queen but also the memories of the dangers lurking as protective measures. The Hive is a villain by itself. Of course, those familiar with the franchise also know to expect outrageous monster and creatures formed from the undead and the heavy results of the transformed T-Virus, making them huge and strong.

Overall, Resident Evil: The Final Chapter delivers a decent movie. After so many parts before it, Resident Evil has dropped to something of a guilty pleasure. This final instalment aims to wrap it up. In many ways, it does a good job by giving it a little more plot, balancing it with a good amount of action and adrenaline rush and keeping Alice as bad-ass as she always is. The villains, whether The Hive, Red Queen or Dr. Isaacs is always a threat. And they even try to add in a little something more. For that, I think its a great effort that works. I expected a guilty pleasure fun time with lots of action and bad-ass Alice and I came out getting more than that, plus a sense of the franchise finally having some answers. For me, this worked and probably for those still into the Resident Evil franchise, it’ll work. Whether it’ll end here, who knows, maybe if this does well, we’ll get more. For now, I’m happy with where this one went and the whole journey of it. And if it is the last one, I’ll miss watching Mila Jovovich’s Alice.