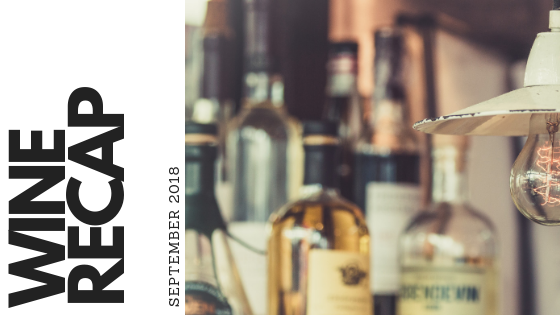 With my husband spending most of September also in recover phase, we dialed down on the drinking thing so all of this was in between so we went for lighter drinks. One of these was one that we had tried out a month or two ago but forgot to take a picture of so forgot to share on the Wine Recap. These things happen but coincidentally my friend bought it this time for the Battle of Ingredients so here we are.

Let’s check out what we tried this one!

I’ve heard about how good Mike’s Hard Lemonade before but never had it before. On a spontaneous trip to the grocery store, we picked this up as a fun little taste. It did live up to all the good stuff we’ve heard and it tasted really good. I like lemonade in general and the alcohol was light so it actually balanced out smoothly.

I’ve tried Palm Bay before on a taste testing at the Grand Prix event before. I can’t remember what flavor it was since it was a few years ago but one evening, my husband’s coworker gave him one of these to try out. Palm Bay is very much a party drink. Its really sweet. I’m not a big Strawberry Kiwi flavor fan and this is good for a group but not one that I’d pick up as much, mostly because if it was for myself, I’d prefer MadJack.

I don’t drink beer often. Its a little too much than I can handle. I believe it has to do with the hops and the gluten aspect. I’m not a big fan in general but when we went to the supermarket, we saw a variety pack for this gluten-free beer. It had 4 flavors. I only have one here since the other ones, my husband had drank with my father in law one day so that I didn’t try it. This one is a herb flavored amber beer and its actually fairly good.

Other than a beautiful bottle, Cote des Roses is actually a really lovely tasting wine. It feels like a long time since I’ve actually drank wine so I’m not sure how to describe it. However, it was very balanced. I love the smoothness where its not too sour or too dry and it was fruity and light. I plan on giving the white wine a go and get three or these bottles or something to turn it around and make a glass bottle rose bouquet. It’ll be such a beautiful decoration.

Leaning a little more on the drier side, Listel- Gris is still fairly decent. Not quite as good as the balance the Cote des Roses achieves. However, there is a depth to it. The after tones of this one works well. There is a fruity and light taste however so its not hard to drink. A nice one to have with friends, making it a great choice for our barbecue.

That’s it for this Wine Recap!
We’re slowly getting back into the wines and alcohol however, we’re being careful of health.
If it slows down a little with this, it will be in the amount we decide to recap.

What have you been drinking? Any great ones to share?