My goal this year was that if I could go see all 10 movies in my 2017 anticipated list, I’d be pretty happy. Now, of course, this year is a mammoth of a year with a ton of great looking movies, however, I do have to say this movie remake is one that I’ve never been more on the fence about but we do love the anime quite a bit and the trailer looks pretty decent so we decided to head out. Hopefully, it will be decent. Ghost in the Shell was great and honestly, last year was the first time I finally saw it. 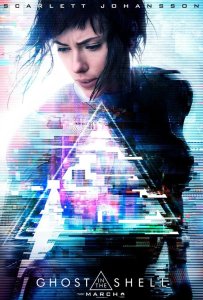 In the near future, Major is the first of her kind: A human saved from a terrible crash, who is cyber-enhanced to be a perfect soldier devoted to stopping the world’s most dangerous criminals. –IMDB

If you would like to hear a quick discussion review over at That Moment In, you can find it below:

Now for my own full review below:

When Ghost in the Shell opens, its hard to not be drawn in by its appealing visuals. One of the biggest strengths also lie in this wonderment of the neo-Hong Kong that has been created visually. Some of the most appealing scenes are replicated almost as beautiful in their own way as the animated feature showed. It is colorful and a little dark and extremely technologically advanced. There is no doubt that the visuals steal the entire show. There is also a very pretty score that accompanies it to elevate the emotions and the story and even the suspense. Those two factors are absolutely my favorite part of Ghost in the Shell. Going back to creating the futuristic Hong Kong, I think the best compliment from myself who has been to Hong Kong many times, is that there were many moments and locations and settings that reminded me of the city be it residential or architecture. 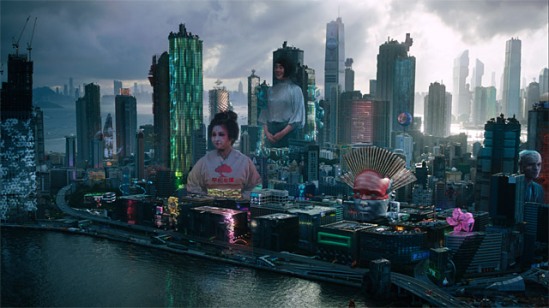 However, Ghost in the Shell does fall short a little in various places. For myself, I felt that the way that Scarlett Johansson portrayed Major, who is the first of her kind “ghost” who is composed of a mechanical body but powered by a human brain, emphasizes heavily on overacting as simple as her walking motions seem more robotic. There’s something that seems so abrupt and blunt in her character. Perhaps the best word is that the story is now deducted to a more simple basis and is more straight forward with less between the lines moments that will make you think too much. Most answers will be revealed by the finale and that is something that is very different. It might not be just the character of Major that lacks depth or character development in some ways. There are still moments and bonds in the story that are apparent and that work well. Characters such as Batou played by Pilou Asbaek, Aramaki played by Takeshi Kitano and Dr. Ouelet played by Juliette Binoche definitely were memorable characters which decent arcs. 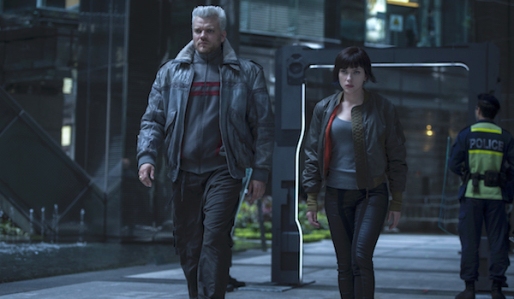 As someone who isn’t very familiar with the original manga or the animated feature released in the 90s, I looked at this one from a more standalone point of view. Obviously, there were scenes that were so memorable from the animated movie that I remembered and was done well here. I’ll go more in depth for a comparison soon in the new segment I’m working on after I take a look at the manga but as a standalone, there is something about making a story that is more linear and straight forward like this one which makes it easier to digest for a new audience and for those like myself who aren’t incredibly in love with the source material or the original movie. The visuals and score are beautiful and suitable for what they are trying to tell. Everything on the surface works really well even if it wasn’t quite the in depth experience that perhaps the source material had wanted to put together. The story could have more between the lines aspects however as an action popcorn flick, the action sequences are done well and flow smooth. 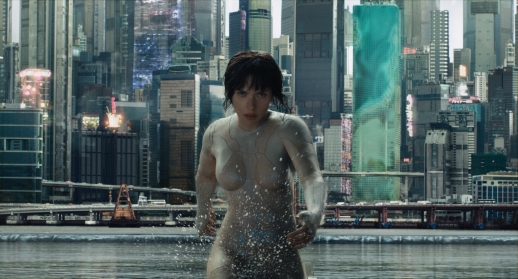 Overall, Ghost in the Shell is a relatively good action popcorn flick. It brings in beautiful visuals and a moving score accompanied with a linear story and a decent cast who pulls off a good homage to the animated movie. There are some odd story choices here that justify why we have the whole “whitewash” aspect especially casting Scarlett Johansson and the answer might be acceptable to some (like my husband) or odd to others (like myself). However, the action scenes are done well and the story, while could use some depth, was pretty good although a little slow in the beginning. Between me and you, I fell asleep for 15 minutes somewhere in the first half, so blame it on a late showing or that it was slow because I haven’t figured out which it is yet but it did happen. As a standalone, it works well enough and a good movie experience.

Have you seen Ghost in the Shell? What did you think of it?
Are you a fan of the manga and/or animated movie?

The second movie in my line-up is not only on the most packed schedule on a personal level but also one that I’ve been anticipating a whole lot.  Its this little independent drama called I Origins. Mike Cahill’s first movie after Another Earth, which I totally adored.  My review of that one is HERE if you’d like to check it out. Whatever Brit Marling attaches herself to, I’m willing to go see.  And then there’s Astrid Berges-Frisbey who I adored in Angels of Sex (review HERE).  And its been a while since I’ve seen Michael Pitt and even though the movie Murder by Numbers wasn’t all that great, I still remember Michael Pitt vividly and how I thought he’d turn out to be a fine actor someday (or at least I hoped it would).

I’m getting ahead of myself, how about a little summary before we hit the review (as complicated as it will be to write)?

Ian Gray (Michael Pitt) is a PhD student and a molecular biologist studying the evolution of the eye.  He is ready to prove that God has nothing to do with the creation of life but rather evolution can be controlled by humans.  When Karen (Brit Marling) enters into his life as his lab partner, she helps him discover the ambitious way of looking at his research and experiments.  At the same time, he is also lead by the mystery of these beautiful eyes that mesmerized him which leads him to Sofi (Astrid Berges-Frisbey), a free-will and spiritual woman. Sofi becomes his first love but also the one that eventually slips away from him. Years later, all his research is questioned when the find a breakthrough of finding the impossible happen, similar iris patterns.  Which brings the question: Are the eyes really the windows to our soul?

I Origins has this amazing concept and just like Another Earth, it sets out a lot of questions.  Last time was essentially soul search and forgiveness while looking at the possibility of a second chance.  This time, its exploring the eye, with the main questions of religious/spiritual beliefs and science.  Isn’t that the big question, right? Except there is no reason to be offended by this even if you carry your faith with a certain religion.  Mike Cahill is quite a genius, I find, because he explores the stubbornness of believing in science as always finding proof but then looking at whether if it were to be disapproved by religion, or vice versa with religion, whether they would be accepted. What I love about this movie is not even touching these elements but just that, it looks at whether there is a soul and reincarnation.  To me, the fact that he can make something so abstract and invisible thing appear in the context of a movie and apply it so efficiently and beautifully, I was totally sold. As with Another Earth, these stories progress slowly and build their momentum to enchant its viewers. Honestly, I really think the enjoyment of this movie requires you to stay open-minded and to fully accept the possibility of anything that can happen.

The best line in the movie goes to (and its in the trailer) when Ian Gray meets a woman helping him out in India and asks him: What would you do if something spiritual disproves your scientific beliefs?

In a way, you can look at I Origins in different phases but each equally passionate for what its trying to say.  The first part is an introduction with passionate love story about first love.  In this sense, Michael Pitt and Astrid Berges-Frisbey are quite convincing as the really in love couple except I guess, there’s always that question of when their beliefs would get in the way.  Sofi is a spiritual girl who believes that they were brought together because she feels like they are connected in a previous life, which is something that Ian obviously does not believe in.  As I write this up, I’m starting to see some correlations in the movie that I didn’t even notice the first time around.  Except it is undeniable that their love does feel very genuine.  Although at times, it seems to brush past maybe just like how a quickly developed romance feels like with all the passion masking our logic, but thats just me overanalyzing, I think. However, we quickly see that the beginning happens as quickly their ending and that part of their relationship is what peaks the turning point of where this movie is going and thats when we fall in the world of possibilities, exploration and just simply thought-provoking area.

I have nothing to say about the cast here honestly but rather if I could, I’d put spoilers and then I’d invite everyone who has seen this to have an intense conversation about I Origins.  I think the cast was perfect.  The only person I haven’t talked about at this point is Brit Marling.  She is a beautiful actress who knows how to dive into these challenging roles of being torn between some intense choices in life.  It was that way with Another Earth, same goes to The East and now we have I Origins to add to her list of intriguing movies. Brit Marling’s Karen lights up on the passion of discovering something new shows a bit about her character itself.

I’m out of words for just how impressed I was with I Origins.  It was beautiful to watch and it blew my mind.  It was about deep issues: life and death, reincarnation, science and religion and especially beliefs and passion.  In my opinion, Mike Cahill really went over and beyond with this movie and its amazing to see.  I was speechless at the end of this and I offer my standing ovation to him and everyone involved in this movie because its been awhile that I’ve been genuinely and completely in awe with a movie and spent some time thinking about the genius of everything behind it.

Seeing as this was a Canadian premiere, any thoughts on this movie? Anyone thats seen it can please tell me whether you liked it or not? And if you didn’t, could you please explain to me why? If you did, what did you like about it?