The last movie of this little Paul Walker marathon features Takers.  I’ve never heard of it before searching it up on Netflix and finding it so I went in know absolutely nothing except that little description. I seriously would’ve continued on and done the whole Fast and Furious franchise marathon but no worries, I fully intend to do that before Fast 7 comes out.  Lets check this one out!

A group of bank robbers lead by Gordon (Idris Elba) along with his team: John (Paul Walker), AJ (Hayden Christensen), brothers Jesse (Chris Brown) and Jake (Michael Ealy) just finished a big job and is ready to take their break.  However, their ex-teammate, Ghost (T.I.)  has early parole from jail and pulls some connections and asks them to join him for another multi-million job to steal from an armored truck.  At the same time, the previous bank job is under investigation and cops Jack Welles (Matt Dillon) and his partner are hot on their trail.

Yet another action thriller with Paul Walker! But you know, he does do great in the action genre 🙂 Takers is something of a mixed one for me.  The beginning, after we see their genius intricate plans with their first job, we get to know the team a little more.  Its a bit slow as we set up the story.  When the big heist starts, we’re only halfway through the movie.  I’m not saying its a bad movie because I rather enjoyed it and it had an awesome cast involved. I just felt like it was a bit long and could’ve done better with a tighter and shorter storyline but I’m not sure if it would’ve helped to not describe everyone? Did knowing their roles in the bank job prove to be that essential? I’m still debating those questions. It does help to make the audience connect to the team. Still, I guess using an hour to build up to the big job is pretty good already and the second half was pretty fast-paced and exciting to watch.

Did I ever tell you that I like male-heavy movies? I mean you can check out my enthusiasm for say, Fast Five HERE or The Expendables 2 HERE. Of course, this isn’t quite as mindless as those but it did have explosions, gun fights, nice looking cars and motorcycles and so many handsome men.  *ahem*I have a long time crush over Hayden Christensen and well, Paul Walker is pretty charming as always.  Then we have Idris Elba who is a total different kind of hot. Okay okay, back to the review.  I could talk about hot guys in another post.  I should do it, right? 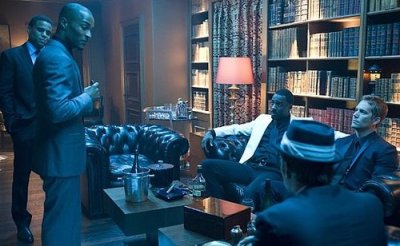 Aside from their good looks, they all did a great job along with Matt Dillon who played the cop.  The team themselves, excluding Ghost really gave off the whole bond of a team and good friends.  I never had seen Chris Brown in anything and I was a bit not sure because of him but he did well 🙂

Looking sharp, Paul Walker! Yup, I’ve been doing it for the last 2 movies so I figured he deserved a section since its a marathon dedicated to him. Paul Walker in Takers was pretty cool. There were so many characters so his screen time wasn’t all that much but he played John.  Something like the right hand man of Idris Elba’s Gordon and also the guy with all the firepower, I believe.  Well, he did some pretty awesome gutsy moves in that role so I respect his character, he did what he had to.

Overall, Takers is a decent thriller.  Its a bit long but once everything is in place, it piles on the action: explosions, cars, motorcycles, gun fights, etc.  Its definitely a very enjoyable heist movie.  Maybe not as much as Fast Five but still quite good with a solid cast.

Have you heard of this one before?

I’ll definitely miss Paul Walker and this is the end of my little dedication to him.  If you missed the previous two reviews of She’s All That and Running Scared, you can find it HERE and HERE respectively! And if you want just a bit more on his movies, Fast Five is linked up there and Fast 6 is right HERE!

We’ve gone through a tough week…but we made it!